Hi, new member here. Great site with very helpful info for a renewed Norton owner. I will have lots of questions Im sure! First one... looking for frame info, need to get bike title in my name. It was from out of state, so requires VIN verify by DMV and state police. No frame number, research I found says first production commandos had none, From the Norton factory record book#32. I would sure like to have some documentation on that or a copy. Motor # is 20m3 128531. Anyone help with that?
Thanks
Dan

I'm not familiar with this "Norton factory record book#32" but, as far as I know, all production Commandos would have had frame numbers (starting at 126125) when they left the factory?

The number would normally have been stamped on a plate riveted to the headstock, and I guess if there was a plate, then it's no longer there?

The frame number would have matched the engine number originally (without the 20M3 prefix) so 128531, and the gearbox casing may have the same number stamped across the top mounting lug?

Thanks for the reply, above link is where I read the info about the 3rd or 4th post down. My bike does have the early frame, no support tube.

OK thanks, although I would consider it very strange that a Norton would have no frame number (unless it was a service replacement part?) as many of those early frames without the support tube broke!

I would certainly think about finding a replacement frame with a support tube?

Yes the frame is a big concern. But the bike has survived and looks like it spent time as a racer. Did not find much info on the early frame issue, other than the link I posted. The frame has gussets where the tubes meet, a picture in the workshop manual(o6-3062) page 40 shows the frame and gussets. How to post photos of bike?

...you can then upload your photos to your Photobucket album, preferably at the 640 x 480 message board upload size, and then copy the *IMG code* line *next to each photo* and paste it into your message.

Please...use the Preview button to check it all works (your photo/s are showing correctly in your message) before posting.

Here are the areas of concern: Not "if " but when.And no don't try repairing it. 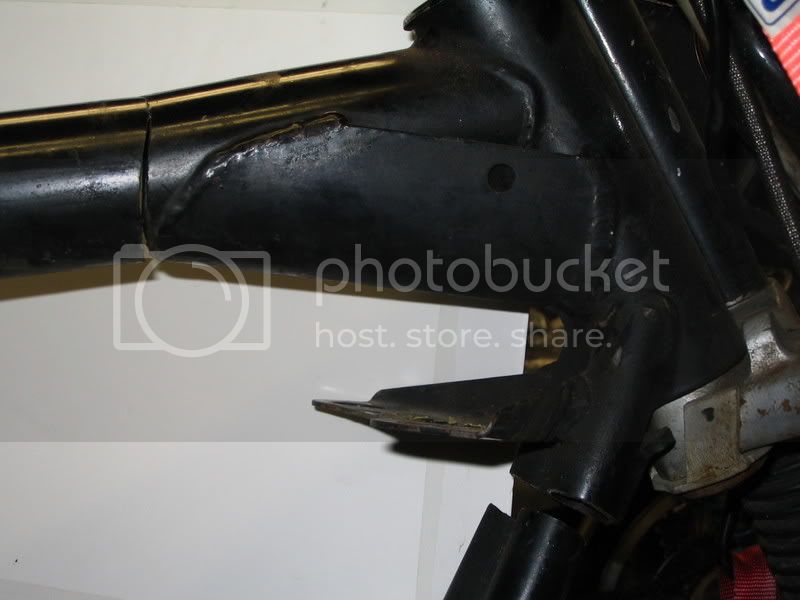 Thats my frame, with no breaks, yet

Dan, to make matters worse, they drilled through the gusset to mount the Dunstall fairing! I would seriously replace the frame with one from a 1969-1970 for originality, but any Commando frame will do.

The reason you don't see the frame number is the fairing mount is covering it.

What you have was originally a 1968 Fastback or possibly "R" model which has been converted with Dunstall tank, seat, fender, and fairing. The rear brake appears to be a '70's Airheart from a dirt tracker. The front brakes are interesting, I have never seen this type before. I don't think they are anything Dunstall did.

I would not worry about registering with a replacement frame, the blank frame tags are readily available and one to match your engine number (and paperwork) is easily created.

Thanks Ron, yes the brakes are the Airheart, on the front also. The rear has 2 discs sandwiched together! I felt the bike was unique with a lot of intresting features. Everything is safety wired, even the rear spokes and all of the instrument panel. A tach in the center and a cyl head temp guage on either side.

Hello, hope everyone hade a great holiday! I did find frame #, no tag, stamped numbers(matching eng #), hidden under fairing mount. Is there a "best" year for commmando frames since I will be sourcing a new one?
Or will any year with the proper support tube be fine? And, any major fittment issues swapping the early engine to a later frame? I did mention I would have a lot of questions, right. Thanks again.

The later the better as the frame improved eg the side stand and center stand, but make sure its a 750, an 850 will work but you may have to consider changing the yokes as the steering angle was changed for the 850 and the yokes changed as well to put the front wheel back into the same position(ish). There will be no issues related to the engine being a different year.

It should be possible to use any later Commando frame, and the '69-'70 type that has the support tube should be a direct replacement.

The head bearing assembly changed to a non-adjustable sealed ball bearing type, and the yokes (trees) were also changed, the stem becoming part of the upper yoke with the securing nut beneath the lower yoke. Your early yokes could possibly fit the later bearings without much (or any?) modification, and others here may be able to answer that?
1972 frame side stand mounting changed again I think?
And, as kommando has already mentioned, the 850 frames have a (1 degree) difference in the steering head angle to 750 frames, so the matching 850 'ANG'-marked yokes should really be used with the 850 frames. But apparently it is possible to use the 750 yokes with the 850 frame (according to information given in the NOC Service Notes)?
Apart from that, there's no significant differences between 71-on 750 frames and the 850 frames that I can think of? Although the 850 Mk3 had a hinged, lockable seat, so a small hinge mounting bracket was added to the L/H frame seat loop along with some minor changes to both inner shock mounting plates, but those differences should not cause any problems.

As kommando says, the later frames have an "improved" sidestand and centerstand. However, if you go for the '72-'75 frame you will also need the side stand and centerstand from those years. In addition you will either need the later engine cradle or drill the mounting holes in your existing cradle for the new centerstand. If you use a '71 frame you will have to deal with the funky sidestand mount and probably end up welding on a new tab for the '72-'75 sidestand.

Alternatively, get a '69-'70 model frame, use your cradle as is and bolt on your centerstand and sidestand. Granted the sidestand is a little weak, but knowing that, with some care you can make it last.

P.S. - after looking again at your photo, I believe you might already have a different side stand as the stock one mounts more rearward than yours appears to. Also I don't see the tabs for the center stand so they may have been ground off when it was a "racer". Do you have a centerstand? These observations may make Kommando's suggestion even more attractive.

Ron L said:
However, if you go for the '72-'75 frame you will also need the side stand and centerstand from those years.
Click to expand...

Shouldn't that be '71-'75 Ron? (looking at Dan's [ddoyle's] bike I think a centre stand mounting is probably not going to be required anyway).

Thanks to all. Their is no center stand. There is a crossbar right behind the engine drain plug with tabs on it. The side stand is a bolt on clamp type. That crossbar and the single exhaust directly under the motor makes getting that drain plug out look like a real chore(the next thing to do).