What Did You Do With Your Commando Today?

Messing with a brand new Console , including Idiot lights and a new Ign. switch on the MK 111 . The male/ female leads are different , larger.

Had a nice 80 mile run yesterday here in michigan. The weather continues to cooperate for an extended season. Uncle bob likes the cooler dense air and responds to throttle inputs nicely.

Quit that bragging Mike! Some of us know what gorgeous weather you guys have all year round in NC... Still, up here in balmy always sunny Michigan, we are enjoying some 1Celsius mornings, and 15Celsius late afternoons. Went out for a ride yesterday in the sunshine and did some riding on some dirt roads and through lots of leaves on some back roads. Did some slalom practice with the centre lines on some back roads for fun. Might do the same today. Tom is right, maybe the season will be extended again like it was last year. Keeping the gas tank full instead of running it dry in preparations for bringing the bike in for the winter. Fingers crossed for nice sunshiny weather for the month of November.

Got the new Don Pender/Madass rear hub laced up to my old rim and spokes, a MAJOR improvement and I wish I'd done it sooner. New final drive too, bronze plates back in the clutch (tossed the Barnett plates) , also tightened up the primary drive.
My bike is much nicer to ride after all this... 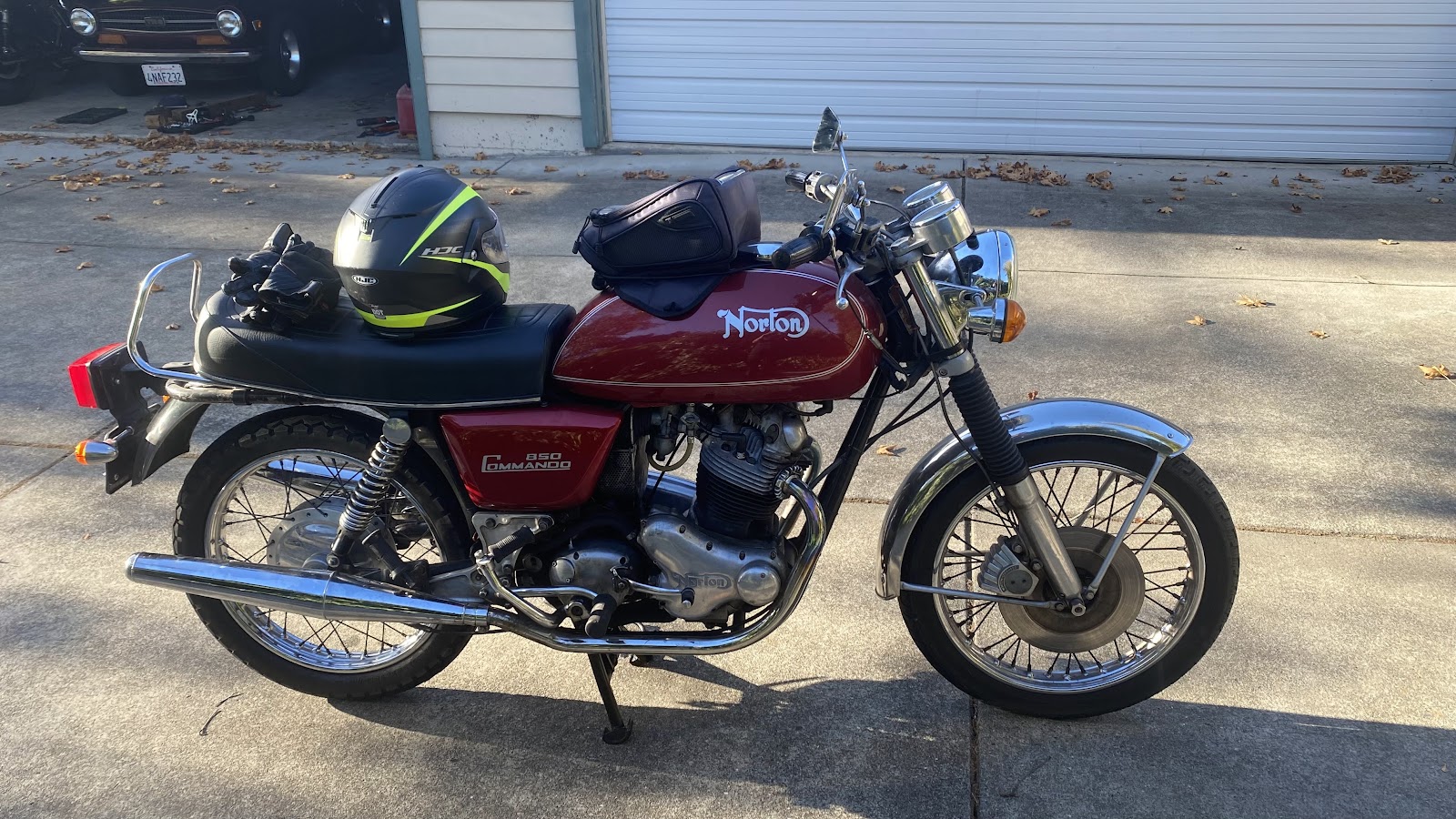 I rode it for a few hours

Out for a blast tonight

KiwiShane said:
Out for a blast tonight
Click to expand...

We have a similar stance since I just recently went from clip ons to flats. Haven’t put many miles on since, so am still in the trail phase: 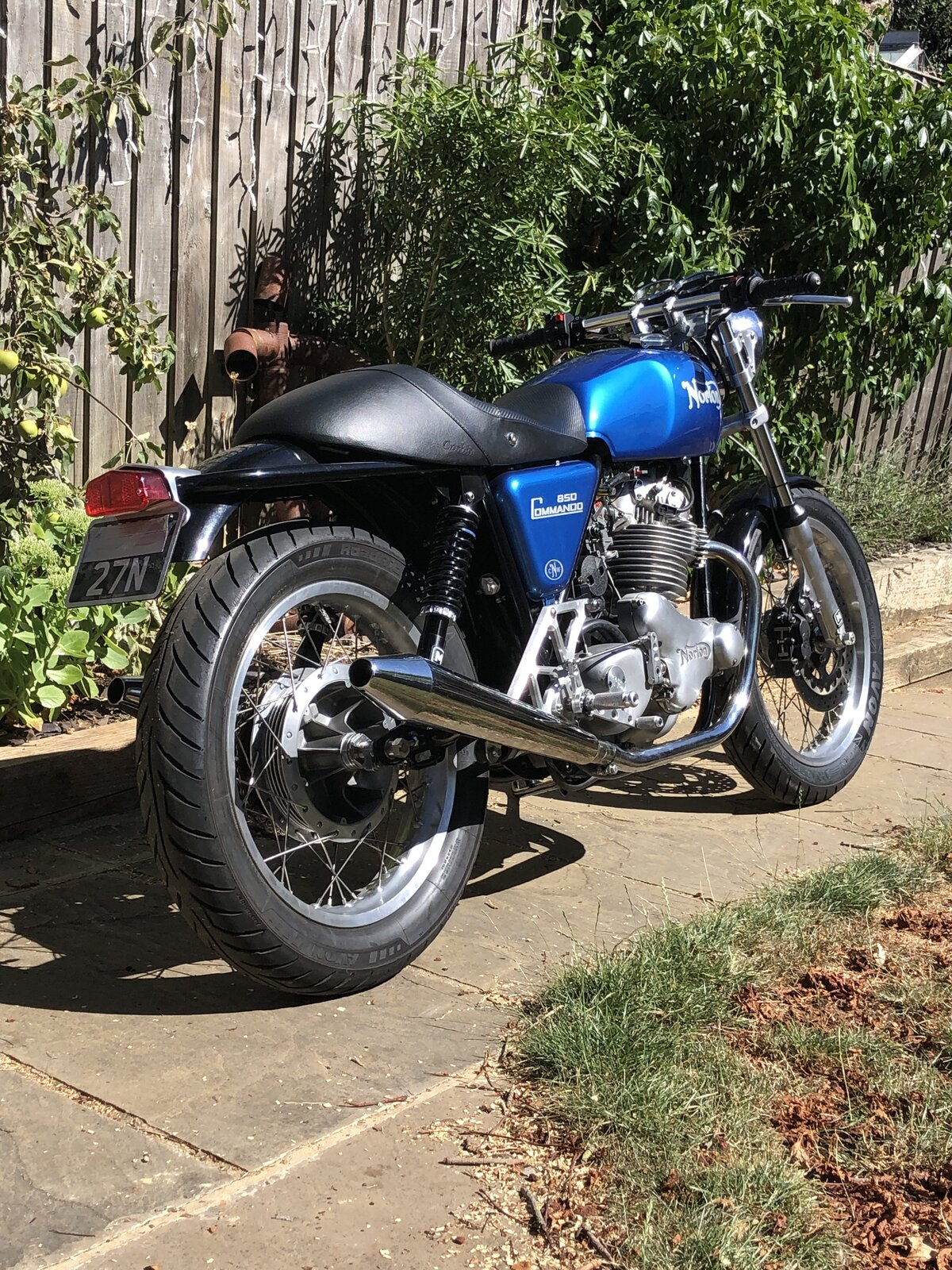 Fast Eddie said:
We have a similar stance since I just recently went from clip ons to flats. Haven’t put many miles on since, so am still in the trail phase:

Thats a beautiful well thought out machine you have there ...I find the RS & norton flats combination quite comfortable...

Took her for a blast around the hood after a long time in Greece.
Installed new Console switch and wirings and 4 new carb. adjuster screws in brass , over sized for easy adjustments .
Amazing ride.
Tomorrow 18 C. in T.O. so the wife wants to ride.
I'm Game.

Bluto - is that a TR-6 sticking it's nose out of the stable? Had a -4 solid axle and a -6 whose rear IRS frame mount was clean rusted through. When you leaned on the pedal the whole car would twist.

Have my MkII out on a cold weather fall ride between rain storm systems today. High temp of 4 Cel. Running my Powerlet heated jacket liner for first time on this bike. I have the upgraded Lucas stator. Heating is a wonderful thing. Only using about half the liner output level and nice and cozy at highway speeds. My SparkBright charge warning LED seems happy, just starts flashing a bit earlier at idle points. Also found out the pair of sun glasses I grabbed on way out the door seems to completely filter out the green light from the Sparkbright, which is the "all good" charge indication. The red warning flashes come through fine. Just looks to be off when all fine.

Did part of the annual northern California BSA club "All British" ride...did not do the entire route due to rain. A great time as always...

Jdub said:
Bluto - is that a TR-6 sticking it's nose out of the stable? Had a -4 solid axle and a -6 whose rear IRS frame mount was clean rusted through. When you leaned on the pedal the whole car would twist.
Click to expand...

Yep, it is...I need to get off of my dead arse and get it going again, it ate a lifter awhile back. Got a line on a complete engine today at a Brit bike event. Had a '63 TR-4 myself long ago.

Hi all,
It’s been a long cold winter followed by an unbelievably wet spring here in the Snowy Mountains of Australia. The local roads have literally fallen apart under the deluge of rain we have endured. In fact I recently broke an engine mount bracket on my MGB hitting a pot hole that was veritably the entrance to the pit of Hades, close to home.
Anyway my commando had slept through winter after it’s last ride many months ago, under it’s cover. Probably to the horror of many on this forum I made no effort to prepare it for it’s hibernation, though it always has very fresh best quality oil in it’s tank or should I say, in it’s crankcase after a lengthy hiatus. As time goes by other items of farm machinery tend to get put in front of it meaning that it tends to be ‘out of sight, out of mind.
Yesterday, being the first pleasantly warm evening, on a whim I took it’s cover off and pushed it out. Even after all these years I still get a thrill of just how right and beautiful a Commando roadster actually is. Turning the key, the red charge light blinked on telling me the battery had some amount of charge. So, in spite of a crankcase full of oil, I gave it a tickle and gentle prod on the kick start and sure enough she burst into life and immediately settled down into a low idle, as it cleared it’s innards of the accumulated oil. I know this is not the done thing and much is written on this forum about the dangers of this practice but it has always worked for me.
So there was nothing for it but to don my old jacket, stick on a helmet and take it for 50km gallop down back country lanes to a mate’s place and fellow rider, who is always good for a few beers. The first 8 km being down my very washed out drive and access road, then onto the rather pot-holed bitumen where I could let her have her head, accelerating up to about an easy 85 mph where the surface permitted
As I pushed her through some long sweeping curves, using the prodigious torque that makes the gearbox superfluous, I realised just how much I like this bike. For those who may remember previous posts of mine, I have given the impression that I have found the Norton a slightly disappointing riding experience, at least in comparison to my more urgent Trident. Now it dawns on me, my Commando is faster than I have given it credit for, it is just that it does it in such a relaxed and easy manner, it’s actual capabilities are disguised. I never have cause to rev it much above 6000rpm in normal fast riding and the engine does seem rather busy above that speed.
So, in short, it has taken me many years of ownership to really appreciate the more subtle points of our bikes character.
As a bike, if anything it gets’s somewhat mechanically neglected as it has always started first time, every time. It has had no major issues other than a broken tooth on third gear not long after I bought it 20 years ago. The reduced master cylinder has transformed it’s brake into something totally acceptable and even the much maligned Lucas electrics have proved largely reliable.
The bike cannot be kept gleaming but always has a slightly dusty or muddy appearance due to the roads it is ridden on. It doesn’t get pampered but is ridden with as much spirit as I can muster in my dotage.
So a great ride and a some pleasant beers in my friend’s extensive rural garden. Not long after the third stubbie was opened an unexpected clap of thunder reminded me that we are in an unprecedented (and I use this term in it's correct sense) wet period. Of course I ran into the storm on the way home but that didn’t dampen an excellent ride.
Regards All
alan

Alan very nice to hear everything is good even after sitting in bad times, my Norton is the same has never been pampered, get maintained only when I feel like it and only gets a big clean and polish on it's birthday the date I wheeled it out of the shop when new, my Norton in 46 years of ownership has always been like that and only minor things have stopped it in that time, my Norton is starting to show it's age now but still keeps going at any riding conditions, its best to get wet while on the home run than getting wet on the start of your ride been caught out many a times coming home but its only water I still enjoy the ride no matter what and I always give a pat on the tank when I get home to thank my Norton for a great day out, seems to work for me, knowing my bike I do know when things aren't right but after 46 years that is very rare.
With the work that has been done to my motor it runs very freely no matter what rev range I ride in.

I've always disliked the ignition switch location, so as I was tidying up the wiring anyway, I took the opportunity to make a binnacle to fit the ignition switch between the clocks. It's bolted up into the bottom remainder of the threads of the front two 5/16" handlebar clamp holes from underneath. It means I can still get to the steering lock and headlamp switch. 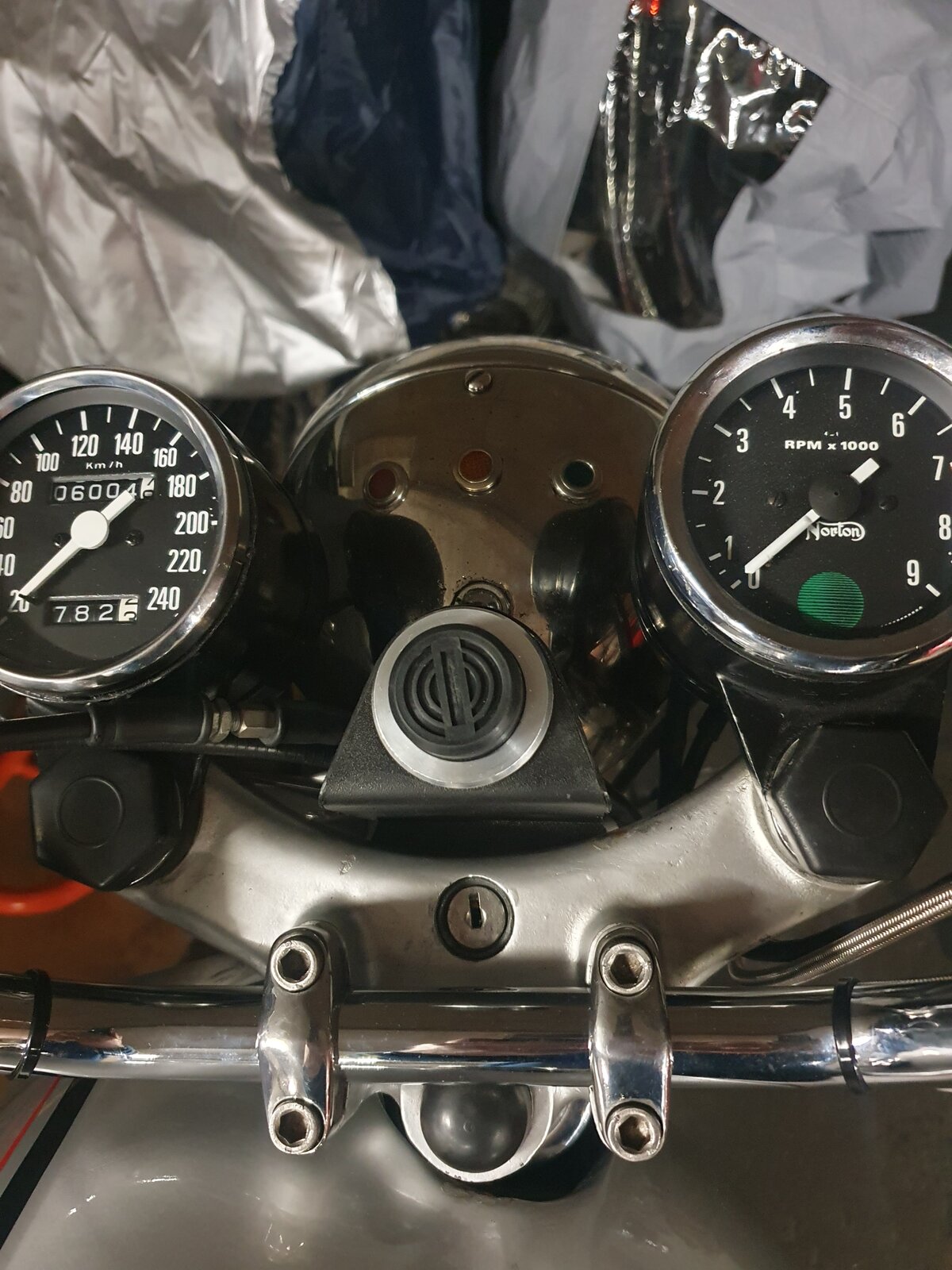 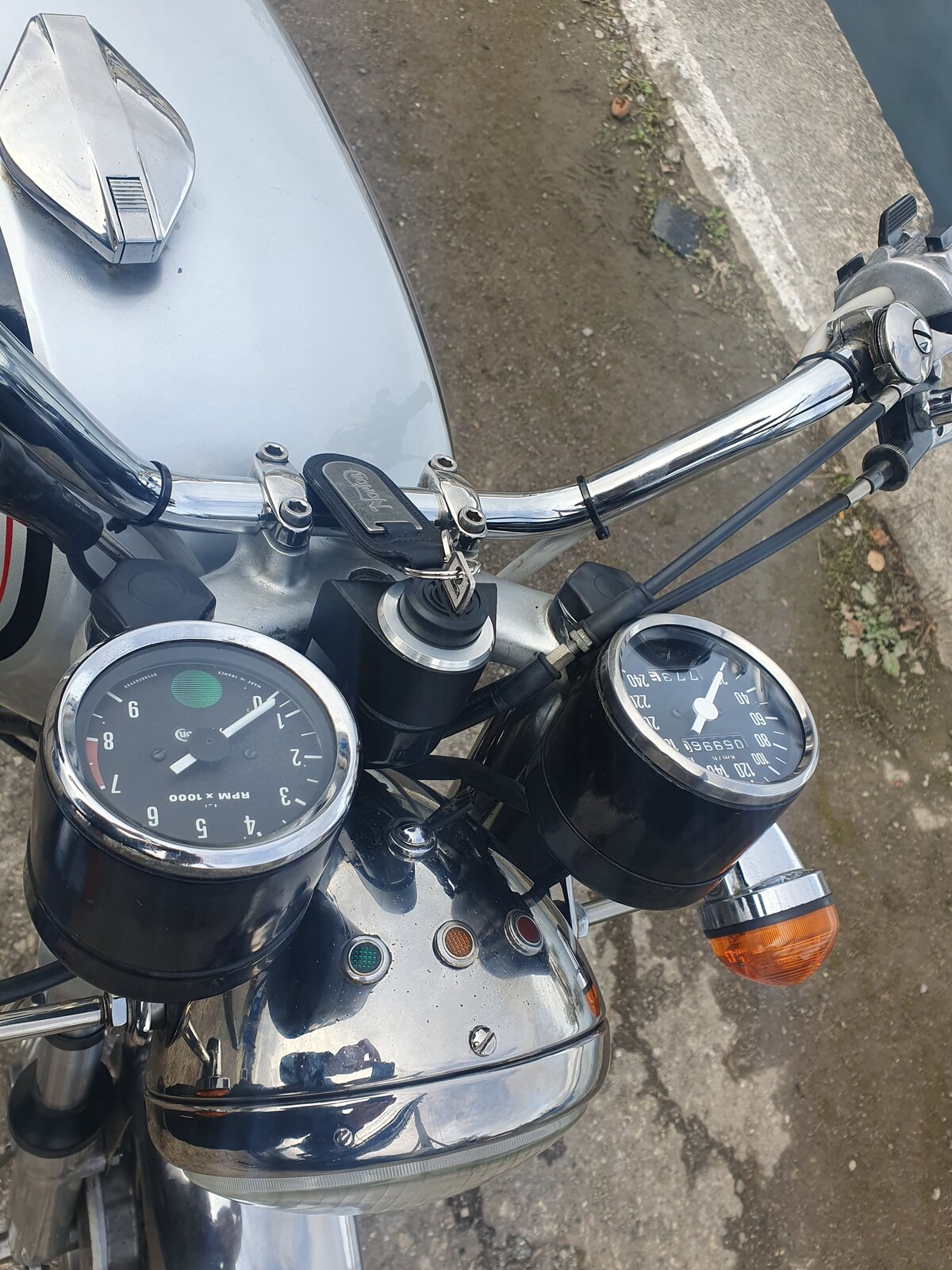 cliffa said:
I've always disliked the ignition switch location, so as I was tidying up the wiring anyway, I took the opportunity to make a binnacle to fit between the clocks. I didn't like the idea of using the handlebar clamps so it's bolted up into the bottom remainder of the threads of the front two 5/16" front clamp holes from underneath. It means I can still get to the steering lock and headlamp switch.