I'm considering doing the frame in something other than Basic Black. I'm thinking bronze or gold, probably a matt finish, might look really nice. The bike initially will be wearing black Roadster bodywork but eventually I'd like to turn it into a Fastback LR. I'd probably do the Fastback bodywork in a dark red.

There's a couple of examples of this on the Colorado Norton Works website. In the photo gallery, Build #19 shows an LR. That's about the color I have in mind, but with a black frame. Build #43 shows a red Roadster with a light bronze frame. That's kind of what I have in mind for my frame, only maybe a bit darker or golder.

So what do you all think? Go for it or stick to black? That's more original and it's harder to see the oil leakage!

Black frames are boring in my opinion. I went with metallic silver for my frame and then a metallic purple for the fenders, tank and sidecovers (all of it powdercoated). I'm really happy with how it turned out.

I’m a traditionalist when it comes to British bikes. However, if I were to step outside the box, I would go for a golden-tan frame with midnight blue tank and panels accented with gold graphics.

I also went for a silver frame but with the tank, panels and guards in Lotus mustard yellow.

Hi Deb
To hell with the rest of us . Go with what you like . Nothing wrong with being different . It is however a Norton so there should be some sort of vintage preservation applied . No !!! i am not a tree hugger.

Look at bike # 36 That is one smart looking bike .

Debby, Sure sounds like you are doing it up right. The non black frames certainly look good. Since changing the color of powder coat is difficult at best, I would pick a color I would want to look at for a long time.

I hope you share some pix when your done.

Having done a couple frames in polyurethane (Imron) and hearing a number of fellas disappointed with powder coating, I think from now on I'll just use catalyzed acrylic enamel for frames. It's easier to repair if necessary and I believe you get a better bond with the metal.

Powder is pretty tuff, but will sometimes crack around fasteners and I have seen it peel. In one case there was rust forming under the powder! I understand the time between blasting and coating is crucial.
Polyurethane is also tuff, toxic to apply and nearly impossible to repair. My 12 year old Imron frame looks good except where there are stone chips on the frame behind the front wheel. I wish I could repair that area without starting over.

Any other opinions on frame paint?

I had my featherbed 750 commando powder coated and it did indeed crack around some fasteners.
I used to have a Moto Go-rusty which I had powder coated and the first time I cleaned it I used the wrong kind of degreaser and it took the finish off the powder coating, it had a stained matt kind of finish after that.
Big mistake.

Ron L said:
In one case there was rust forming under the powder!
Click to expand...

This is why I opted to have my stuff prepped by the powdercoater as opposed to doing it myself. The time lapse between me stripping my parts and the coater coating it is more than long enough for bare metal to flash rust, and continue to rot under the powder. Obviously it cost more to do it this way but in the long run its worth it in my opinion.

I went with a nice medium dark metallic gray - a vw mix- I chose it because it does not have any colour to it. Usually silvers are blue, or purple or some other hue.

It is only paint after all, nothing a little sandbalsting can't deal with in a future "restoration". :lol: 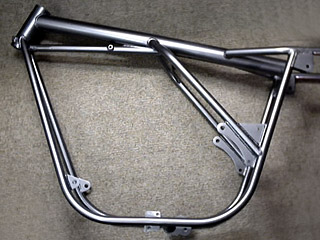 Can't beat the price for powder coating, whole frame pre basted with all the lose parts 200.00. You remove the old stuff they reblast it just before coating. High gloss black. But over time the parts of the frame that see road grit will get dull and need rubbing out to maintane some sort of sheen. Lots of old car people have found this out when doing wheels. If doing it again I would go base coat clear coat. That is a fine silver on the frame above. norbsa

What say ye Debbie?? What color are you doing?
Inquiring mind...

Oh I still haven't decided. Can't go wrong with black, although I think a gold/bronze would look really sharp.

I need to have some work done on the cradle before taking the parts in so I still have some time to decide (and change my mind a few more times :lol:

Actually any recommendations on a decent company to powdercoat my second frame in the Toronto/GTA area?
Thanx

I spoke to a local manufacturer of powder coating & he showed me kids swings epoxy powdercoated & left outdoors for a couple of years. Sunlight had rotted the stuff so it was dull cracked & peeling off. I was restoring Commando at time & his recommendation was to use polyester powdercoat, so ask your powdercoating company what type of powder they propose to use. In mid England, Redditch Shotblasting highly redcommended

Blkbird said:
Actually any recommendations on a decent company to powdercoat my second frame in the Toronto/GTA area?
Thanx
Click to expand...

Automatic Coating in Toronto will do a good job for you. I have seen lots of their work and would certainly use them myself. Before you powdercoat , ask them about repairs.

If you go the paint route Sico Series 588 , Polyureathane will give you a very durable finish also

Thought I'd bump this thread for a status report. I got my frame and related bits back from the powder coaters today. I had everything done in gloss black, including the triples. The bill came to $265. It looks GREAT! SO much nicer than the rust and peeling paint.

My new Hagon shocks arrived today also. So now it's time to start putting the chassis back together...