Hello from Sunny Stockholm (not really, it snowed today...)

I posted about 2 years ago asking for pre-purchase advice about a bitsa commando that I eventually bought. It was a first/second kick starter every day the first summer, but wouldn't start one October morning, and sat since then.

Yesterday I finally got around to tearing into the problem. This is my first time going this deep into an electrical problem, so i don't know if I am doing it right - advice is appreciated!

The bitsa facts as I know them:
69 commando frame and motor
boyer ignition
"Harley" coil - a single big fat yellow unit (picture attached?) completely without markings. Previous owner said it was from a Harley and the theory was it would handle the vibes better.

I started with removing the plugs, put both plugs in the caps, and rested them against the head. A few kicks and it was pretty obvious that there was no spark. With a test lamp I found that I have a light on the white wire into the boyer box. light on the black wire (out from the boyer box) at the connector on the coil (when kicking) but no light in the plug cap, or in the coil (disconnected the plug wire, connected test lamp in it's place).

Soooooo.... bad coil? Is this the proper way to troubleshoot a no spark problem? Anyone have a guess as to what the coil is? The mounting bracket has been changed so it would be more difficult to go back to stock than to replace the coil with a new one I think. 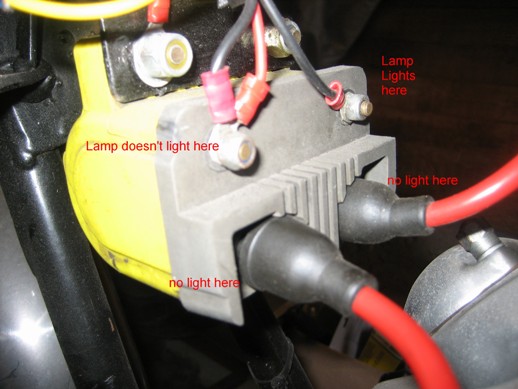 And a picture of the beast before I bought it 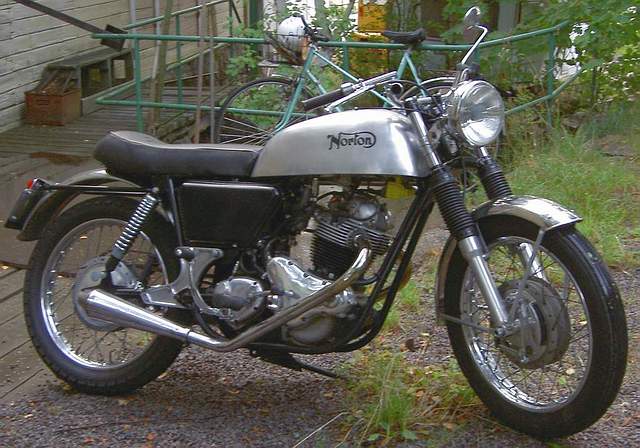 You can use the following informaton to check your (Boyer) ignition system: http://www.britcycle.com/Manuals/BoyerT ... ooting.htm

but quite a few others have that mounting configuration.. The one in this picture is a compu-fire http://www.coloradonortonworks.com/imag ... h_pic2.jpg
(the one I use ... could find them for $48 ) but it looks like they might have changed their bodies.. gulp... rats! Used to use that is ...

do a web search for ( single fire dual plug coil ) on your side of the pond and you should find what you need..

I'm not sure that you would get a bulb to light up on the HT leads even when you are kicking it over, It's high voltage but low current, and the spark is over in an instant.
You really need to test with a voltmeter. If you have corrosion/bad switchgear etc and you get less than about 10 volts at the Boyer, it won't work.

Do you have a key switch?

if so, do you get any pop when you switch off after a couple of kicks?

if you do... go immediatly to your boyer pick-up plate and check the wires. that pop indicates a broken wire from plate which early units did..

yes sir, learned this from experience dead on the side of the road..

I went out to the garage quickly just now to try this:
"disconnect the wires from the ignition box that go to the pickup trigger plate. With the ignition on, touch these two wires together. Making and breaking the connection should make a spark at the spark plugs"

When I touch the wires together I get a nice healthy spark! I checked with the test lamp and get an extremely weak light on the Black/Yellow wire from the boyer box. I even pierced the insulation one centimeter from the box and got the same very weak light. Does this say anything? I am going to check the connections and the rotor tomorrow, but at least there was some progress!

Thanks for the tips!!!

The standard wiring loom feeds power from the ignition switch through the kill button on the handlebars and then back to the ignition. Pushing the kill button breaks the connection. This is a recipe for high resistance and low volts just where you need them. I use a Bosch on/off relay mounted under the tank, this feed power from the ignition switch direct to the Boyer power-unit and then the kill switch is only a trigger rather than a conduit for supplying power to the Boyer. As a quick check simply connect a wire from the ignition switch to the Boyer and see if there is a spark at the plugs when you kick it over (don't ride it this way though as trying to turn the key off under your left knee with a jammed throttle is too much excitement for most people.) On mine I also soldered the bullet connectors from the trigger to the power unit as I experienced a couple of failures with these.

Thanks dave. I neglected to mention that this bitsa-bike has a home made loom. It is already wired as you suggest with a wire directly from the ignition switch to the boyer unit.

When I get it running, I will definately sort a kill switch!