Thanks guys.
Al not biting, I think we've done it several times already.
Roll on the new season.
Chris

I still run a single disc on my race bike , I can out brake a few guys , only because its not as efficient as their two stoppers!!!!
Regards Mike

Occasionally things happen in races which require immediate response, if you have to wait for something to happen with your front brake, it is usually too late. My Seeley had a single chrome plated Suzuki disc on it when I bought the rolling chassis. And my friends had been racing with it. It was hopelessly inadequate. The problem is you don't find out what you need until you have had the accident. I learned to race by crashing a lot. That is why I am not an A-grade rider. To become that, you need to start racing on the best bikes. Stan Hailwood bought Mike a race-proven Mondial as his first race bike.

It probably helps but if I had been bought a fender Stratocaster as a young lad I doubt I would be playing like Jimi Hendrix. End of the day a certain amount of raw talent required.

Hi
I'm biting lol.
At Pembrey from the start you accelerate, then go into a hairpin, thirty odd bikes hurtling into that! I've usually made up my mind about the brakes before the end of the weekend, sometimes even during that first race.
Chris

Chris said:
Hi
I'm biting lol.
At Pembrey from the start you accelerate, then go into a hairpin, thirty odd bikes hurtling into that! I've usually made up my mind about the brakes before the end of the weekend, sometimes even during that first race.
Chris
Click to expand...

Instead of debating it now, why don’t we just compare the race notes at the end of the season... yours with Alan’s, and see what they tell us.

let's compare injuries - before and after ?

Done myself some damage with engines going bang, been taken out & put in hospital once. Dropped it in the wet.
Never fallen off because of my brakes?

Chris, I feel I should explain something to you. When I saw that single front disc on your bike, it made me feel ill. When I first raced my Seeley 850, it had a large single chrome plated disc with a Lockheed calliper. After a few laps I started riding as quick as I did when I was young. Winton Motor Raceway had an extension made to the circuit. The old back straight is now cut off a few yards shot and turns left into what is a more than 90 degree bend. I approached it at race speed and found the bike was not going to stop. I went into the death dive with the brake full on and not stopping while running wide. If I'd reached the edge of the bitumen, I'd have thrown the bike into the tyre barrier. About 18 months ago there was a race meeting there which was conducted in the wet. One of the guys chucked his bike into the tyre barrier - it bounced off and the rear wheel hit the rider in the chest, killing him.
If you intend to use your bike on large flowing circuits where there is plenty of run-off, it will probably be OK. But I would not point the bike at a wall at high speed and rely on it stopping.
I did not mean to criticise your bike, and I know that in some places race organisers permit either drum brakes or a single disc to be used in certain categories of racing. But I would not use my own Seeley, if it did not have twin discs. It is too fast and too heavy.

But I either change all my other bikes... get a brain transplant... or change the TTI box.
Click to expand...

One of the things I really like about the CNW rearset is that it REQUIRES the shift lever to be reversed which then matches the down-for-first, up for all other gears as per every other bike I currently or have ever owned (other than my original '71 Commando). As you noted, much less thinking involved with the same pattern, even though it's on the opposite side.

Re Peter Williams - I met him at the IOM during the Manx GP week at a Norton get-together in 2016 - neat guy with good Norton stories over some beers! And yes, I bought one of his T-shirts which he autographed! Can't wash it though so I never wear it.
Last edited: Feb 5, 2019

The gear change on the wrong side of the bike is not as difficult to adjust to, as the reversed shift pattern. Once you have changed down when you wanted to just touch the rear brake, the punishment conditions you.
I'd love to meet Peter Williams. I would pick his brains. What he achieved when he beat the TZ750s means he really knew what he was doing. It would be interesting to ride one of the first Commandos which crashed a few young guys. I suspect it might have handled like a real racer.

If you screw up the foot side and mash the gearshift on a stock Norton you go into a higher gear. If you do that on a Triumph you go to a lower gear and get some braking so to speak. Im not a track man so perhaps this only is streetwise stuff. But most since about 1970 learn the Triumph pattern first.

Ill be into that Nigel, compare notes seasons end.
I have had one serious off in the last five years of racing, certainly nothing to do with the brakes or supposed lack thereof!!!
Single Lockheed Norton caliper with an upgraded after market master cylinder. 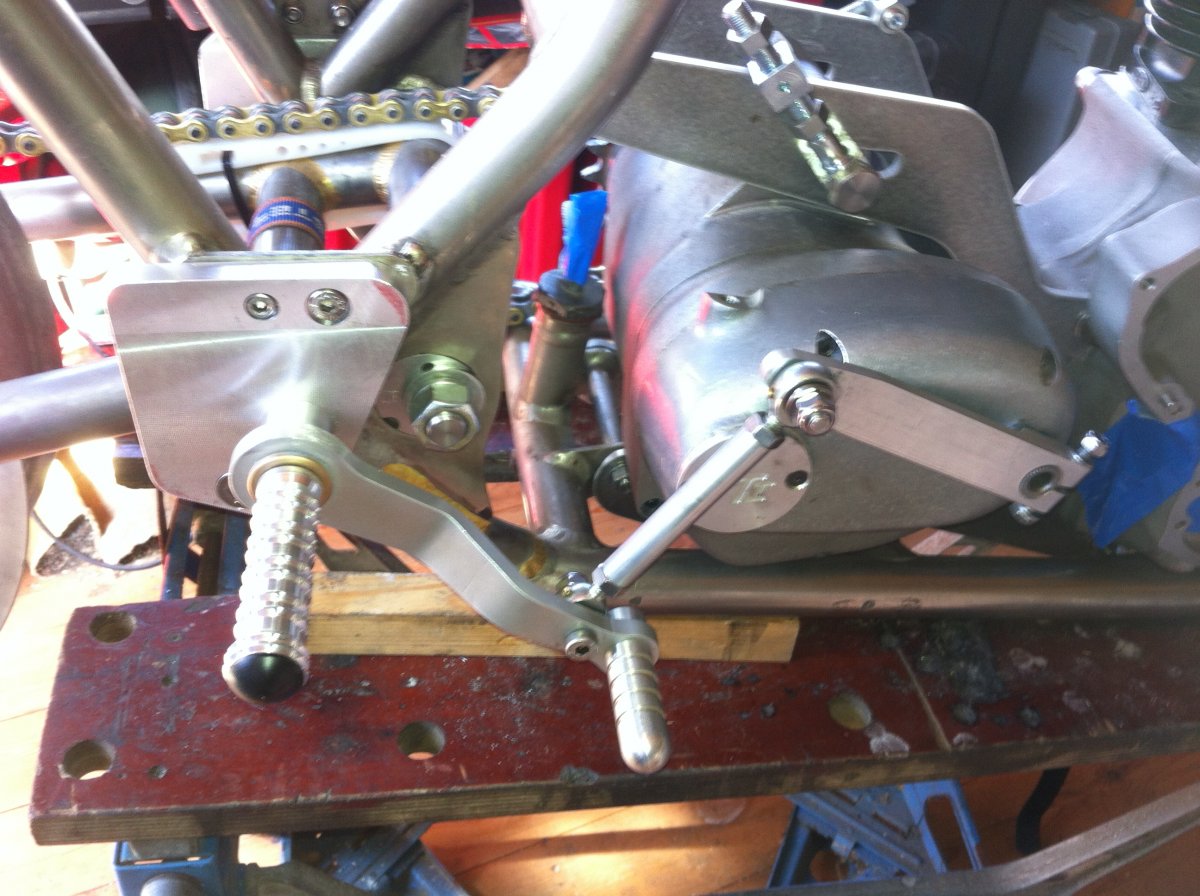 I kept the drum that came with it, and changed my approach a little!

I could have done something like that, but it would have made me tear my hair out.

Keeps the footrest where the Rickman brothers put it and leaves the gear lever where most TTi customers have it, with the drum Bruce 'normally' supplies!

In the end, it was the easiest thing to do. And since 2015 I can't say as I have even noticed it!

In effect, it is exactly what Chris has on his Seeley, it just doesn't look like it!

Does it look as though it was made on a motorcycle factory or a pram factory ?


I kept the drum that came with it, and changed my approach a little!
Click to expand...

I’m pretty sure Steve Maney used to do that. I’d say that trumps any silly negative comments !