That one above reminds me of this one.....

Three very pregnant women are in the OBGYN's waiting room.

How do you know you're in a gay church?
Only half the worshippers are kneeling.

A blind man is in a shop and every thing is getting knocked off the shelves with his white stick onto the floor, a sales person comes up to him and ask if they can help "no thanks just looking".

Arcelor-Mittal Steel, feeling it was time for a shakeup, hired a new CEO. The new boss was determined to rid the company of all slackers.

On a tour of the facilities, the CEO noticed a guy leaning against a wall. The room was full of workers and he wanted to let them know that he meant business. In a voice loud enough for all to hear he asked the guy, "How much money do you make a week?"

The CEO said, "Wait right here." He walked back to his office, came back in two minutes, and handed the guy $1,600 in cash and said, "Here's four weeks' pay. Now GET OUT and don't come back."

Feeling pretty good about himself the CEO looked around the room and asked, "Does anyone want to tell me what that slack-arse did here?"

From across the room a voice said, "Pizza delivery guy from Domino's.”

robs ss said:
Okay Slick - I guess I'll chime in too (why weren't we invited to the party?)

Paddy had been drinking at his local Dublin pub all day and most of the night.

Mick, the bartender, says "You'll not be drinking any more tonight, Paddy".

Paddy replies "OK Mick, I'll be on my way then".

Paddy spins around on his stool and steps off. He falls flat on his face, "Shoite" he says and pulls himself up by the stool and dusts himself off.

He takes a step towards the door and falls flat on his face. "Shoite, Shoite!"

But he crawls up the stairs to his bedroom door and says "I can make it to the bed".

He takes a step into the room and falls flat on his face. He says "Fock this, I gotta stop drinking," and falls into bed.

The next morning, his wife, Jess, comes into the room carrying a cup of coffee and says, "Get up Paddy. Did you have a bit to drink last night?"

Paddy says, "I did Jess. I was fockin' pissed. But how'd you know?"

"Mick called...... You left your wheelchair at the pub"
Click to expand...

Another Irish pub joke - Paddy staggers home from the pub after having been kicked out. He fumbles about with the door key, but then gets that familiar feeling, turns around and throws op. Unfortunately, a small dog just happens to be passing by, and gets covered in beer and assorted bits of pie, carrots and peas, plus the rest....

Paddy hauls himself up against the doorpost, looks at the poor dog and says " Bejesus, man, you have to stop drinking. I don't remember eating that!" 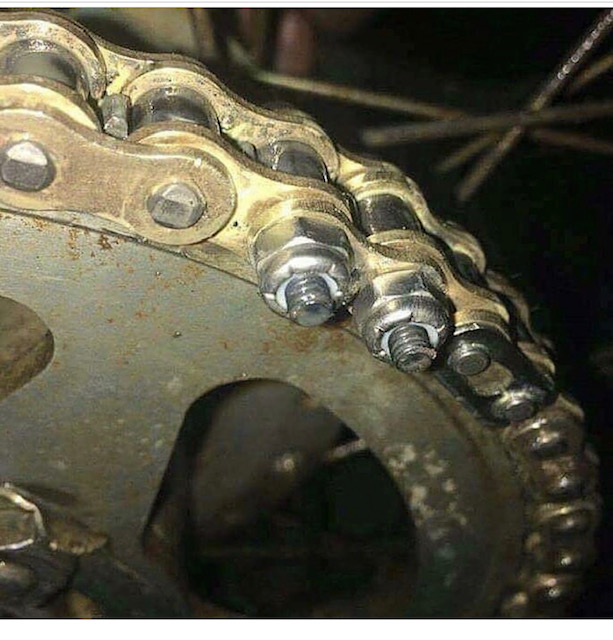 At least the Dork thought to use Nylok fasteners!

If that work was done for someone other than the owner it could end up being homicide- negligent or otherwise.

Bodger said:
If that work was done for someone other than the owner it could end up being homicide- negligent or otherwise.
Click to expand...

That's not a joke, Bodger

A teacher asks her class, “If there are five birds sitting on a fence and you shoot one of them, how many are left?

Little Johnny immediately puts up his hand and says, “None Miss, all the rest will fly away as soon as you shoot one.”

The teacher responds, “Well, the correct answer is four, but I like your thinking Johnny!”

He asks the teacher if he may ask her a question.

“Well, there are three women sitting on a bench, each eating an ice cream. One is carefully licking the sides of a triple scoop cone. The second gobbles the top off before sucking the top of the cone. The third bites the bottom off the cone and slowly sucks out the melting ice cream.”

“The question is; which one is married?”

The teacher thought for a moment before replying, “I’m not sure, but I suppose it’s the one that gobbled the top off and sucked the cone.”

Little Johnny responded, “Actually, the correct answer is ‘the one with the wedding ring on’ but I like your thinking!”

So bored I have swapped the wrappers around on the sweets on a box of Celebrations. The wife's not happy, she got her Snickers in a Twix!

the new preist on his way to the church was walking through a seedy part of town when a lady of the evening says to him, head for 10 dollars. not knowing what she told him he continues on to the church. as he is walking down the hall he sees mother superior sitting at her desk and asks her what is head and she answers 10 dollars just like down town.

A walks into her living room with a huge grin on her face. Her husband asks "Why are you so happy?"
She says "I'm 45 but my doctor told me that I have the breasts of an 18 year old "
"Oh yeah " quipped her husband "what did he say a out your 45 year old ass?"
"Your name never came up"

Quite a few years ago when I was that age I told that joke to my girlfriend of the time. I can tell you it did not go over well at all!

There was a series of TV adverts in Australia a few years ago for a flavoured milk product called "Dare" - the adverts followed a line that a sip of this product would make you "brave".
Well, in one there was this lass in a gold lame mini-skirt, twisting and twirling in front of a mirror.
She asks her boyfriend, who happens to be drinking Dare, "does this skirt make my bum look big?"
His priceless reply was "yeah! but it takes the focus off your face."

A lawyer boarded an airplane in New Orleans with a box of frozen crabs and asked a blonde flight attendant to take care of them for him. She took the box and promised to put it in the crew's refrigerator.

He advised her that he was holding her personally responsible for their staying frozen, mentioning in an arrogant manner that he was a lawyer and threatened what would happen to her if she let them thaw out.

Shortly before landing in New York, she used the intercom to announce to the entire cabin, "Would the lawyer who gave me the crabs in New Orleans, please raise your hand?"

Not one hand went up... So she took them home and ate them.

There are two lessons here:

1. Lawyers aren't as smart as they think they are.

2. Blondes aren't as dumb as most folks think.

Paddy walks into the pharmacy and asks "where's the Tampax?"
The assistant replied "over there mate"
Paddy returns with cotton wool balls and toilet paper.
" I thought you wanted the Tampax?"
"Yea, well last week I asked the wife to buy me a 20 pack of fags, but she came back with a pouch of tobacco!
So we'll see how she likes rolling her fecking own!"
You must log in or register to reply here.
Share:
Facebook Reddit Pinterest Tumblr WhatsApp Email Share Link
Top