With my barrels off I noticed that I have some play in my big ends. :?
Obviously, this is not good. My question is ( and I can already guess the answer... none), but how much play is "safe" and how much would be cause for alarm?
There isn't any play vertically, but the conrods can tip side to side a bit. I plan on doing a bottom end rebuild next winter anyway so I don't want to get into it now.
I assume most of the wear on the shells, not the journals themselves. The piston and rod I have hanging on my wall from my Honda has very soft shell material so I am hoping it will be just a case of replacing the shells, not a regrind but I won't know until I tear it apart and inspect. Any thoughts?

Btw -Interesting thread on forks.
A general thanks to everyone on the forum - wouldn't be able to do this stuff without you!
Phil

Make certain what you are observing is the rod rocking and not side play. It is unusual to have rocking motion with no vertical movement. If indeed you are seeing the rod slide slightly horizontally on the crankpin, then this is not unusual.

It most certainly is a rocking motion, not just lateral movement. Gave me a bad feeling in the pit of my stomach or was that my wallet? Is this something I should be very worried about or can nurse for a while?

Any thoughts on Permatex 51813 vs Loctite 518? They are supposed to be the same stuff.

Permatex was a part of Loctite Corp from 1972-1999 when they were taken private by a group of investors and later sold to ITW. I would say these two products are as close to the same as one could get.

The rods should wiggle side to side a small amount. You can use this measurement to determine actual slack in the big end, and there has to be some slack there or the motor would seize.


On a Vincent we think about renewing the big end if the total side play at top of the connecting rod is much more than 50 thou. Measuring this side play is a good way to measure the play in the big end, which should be negligible by up and down feel, as yours is.
Somewhere I have the equation that gives the ratio of rod wiggle to big end clearance for a Vincent. No doubt someone here will know what this is for a Commando, which will have a differrent rod length, bearing diameter and width than does the Vincent, hence a different ratio.

Fastback, what did your motor sound like before you took the top end off ? The big-ends are not really a weak point of the Commando engine and if they are getting a good supply of clean oil then they shouldn't fail prematurely.

If the motor sounded OK previously then there is probably not a problem. If you've got a Norton owner's ear then you will hear it if there is anything wrong. Unfortunately, if the ends are really shot and get the chance to hammer then the caps or bolts are likely to give up.

Thanks for the thoughts.
Conceivably I could be driving around on a rattly bottom end and think it is normal... It hasn't changed or gotten worse.
Having come from the world of seamless (soulless..) multi-cylinder Hondas, and having the misfortune to only have had one Norton, I am not too sure if there is a problem or not. The bike always has seemed to make a bit of a racket, I just wrote the noises off to tappets and the general cacophony of British machines. My friend has a 72 commando, doesn't sound much different to his, perhaps a little more "klanky".
I've had piston slap on previous bikes, but no bottom end problems.

I did buy the bike from a reputable tuner that said it was a strong motor, mind you, it was a bit of a rolling bitsa.

re: Permatex - drove halfway across the city to a NAPA dealer to get the "Loctite 518" and was handed a tube of Permatex 51813. I am going to forgo the base gasket and just use the Permatex.

I found the strangest thing on my bike, there was a blob of aluminum squished between the barrel and case, there was a chunk of gasket missing in this spot. It just lifted off with my fingernail. 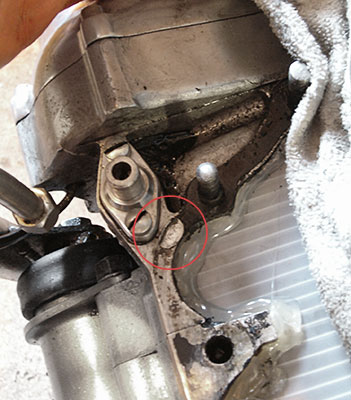 Here I am about to helicoil the central stud.
I thought the leak was from the tach drive or the head gasket at the push rods, but they seemed ok. I did install the tach gasket anyway.
Phil

If the motor is getting a bit worn then things like cam followers can get quite rattly with no apparent ill effects.

Shot big ends sound horrendous and the noise increases with revs, falling off sharply as the revs drop again.

That blob of alli looks as if someone has lost a bit of base gasket and forced something else in. Not the sign of a good workman in my opinion.

If you decide not to use a base gasket, have a good look at the wear lip in the cylinders as deletion of the gasket will result in the rings contacting the ridge. My preference would be to retain a gasket until rebore time which would also give the opportunity to check that the faces are flat.

Is the silicone in the photos just there to catch swarf ?

To be perfectly honest, If I had the top end off a motor and found what you have, then I would dismantle it completely, including sludge traps etc. As we have seen on this forum, if a Commando throws a rod then complete destruction of the engine and damage to the frame usually follow. I wouldn't take the chance.

I've checked the sideplay numbers with the proper officials. Unfortunately these numbers are for a Vincent, but it gives you some idea of normal conrod sideplay.
At point of rebuild, side play at top of rod is to be 35 thou +- When sideplay becomes 80 thou or greater, it is time to rebuild the big end and probably the rest of the bottom end. A friend recently pulled his Shadow top end off at 70,000 miles. He has a method of pulling the wrist pin without pulling the piston and rings completely out of the bore. This way you do not interefe with the seating of the rings while doing this big end check.
Sideplay had increased just 8 thou to 43 thou in 70,000 miles of running, nothing to worry about.

Someone in the club took the time to do the trigonometry necessary to equate side play at top of conrod to big end clearance or slack. This is a very accurate and easy way to measure the big end slack.

I'll be surprised if someone has not come up with a similar way of setting out the range in conrod sideplay for a healthy Commando big end.

Thanks for the numbers worntorn, it gives me a feel for what's going on.

That is just hot glue used to seal the case up when I did the helicoil.

I assume the hone will take care of the lip - or no? I measured the bores and they are in good shape - only one cylinder is off by a thou from top (1/2" down from top) to bottom (1" up from bottom).

Thanks for the description of big end wear, I know the bike sounds the same at all ranges, so I am not too worried. But yes, I am nervous about a bottom end blow out...
You must log in or register to reply here.
Share:
Facebook Reddit Pinterest Tumblr WhatsApp Email Share Link