I have a '74 John Player Norton . It is missing : R footpeg , L footpeg , L Brake pedal assembly.
What type of rearset controls are OEM?
Dunstal ?
Norman Hyde ?
Did Norton have an OEM rearset ?

The old bike was complete , less these parts and two cast aluminum fairing braces , which I also need. 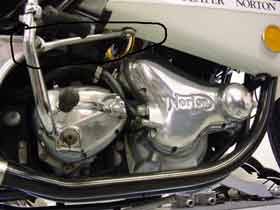 Thanks for any info.
[/img]

Gypsy77360,
The original JPN replicas had an OEM rearset pegs. They used the standard shifter turned backward and I believe a reversed camplate to keep the pattern one down, three up. Finding these will prove challenging. If you don't already have it, there was a Cycle magazine photo spread from 1974 which has many great shots of this model. It could prove useful in locating the correct parts. Also Fred Eaton at Old Britts has the parts supplement book for the JPN replica. It's pretty cheap at about $3. Probably no pictures, but part numbers. Good hunting.
Ron L

Whether or not Norton manufactured the rearsets or outsourced them, these were specific to the JPN. The left side has a short brake lever and peg mounted to an alloy back plate with a cone shaped post for the brake cable and an L shaped brake pedal stop screwed onto the back plate. The brake cable has a brake light switch incorporated similar to the early Commando front brake cables.

The right side is fairly simple with a folding peg attached to an alloy back plate that bolts to the "Z" plate. There is no linkage to the gear box, rather there is a reversed pedal/arm that is angle out from the gearbox at about 45 degrees. The gear lever is available from www.norvilmotorcycles.com

I jumped at the chance to buy a '74 JPN a couple of years ago. After a 2.5 hour ride each way to the Superbike races at Laguna Seca discovered this is the most uncomfortable machine I've ever ridden and sold it. I know I had the only JPN at Laguna Seca on the 30th anniversary of Peter William's 5th place finish (at Laguna Seca) during the '73 year of the Isle of Man victory for Norton. No one really noticed, but Kenny Dreers girls at least put some Norton stickers behind the wind screen.

Thanks for the info . Have shifter , which looks like std. arm bolted on backwards , therefore only need footpeg. Left side only have "z"plate, need brake pedal and footpeg.

part number 069512 on the www.norvilmotorcycle.com website is a very close example of the JPN rearsets. It uses the reversed gear shift lever. I have three of the JPN owners pamphlets I bought from norvil for about $0.50 each. The shift pattern in this pamphlet is one down the rest up, so the gearbox has the usual camplate...not reversed. That's how my '74 JPN was.