I was about to pop the engine in the frame, while looking over the Norvil Vernier type ISO units I have, a bit of logic popped into my head....

The non-adjustable collar is nice and tight to the support bolt,

...but the adjustable collar has no contact with the support bolt, leaving the bolt rattling in the tube on one end? 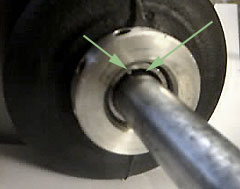 On the front the bolt is tight against the welded seam that the runs the length of the tube - On the rear there is no friction with the weld, leaving only one end supported. 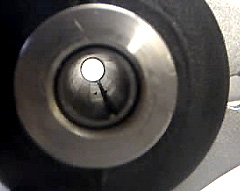 Has anyone else encountered/noticed this. Any thoughts?
Am I missing something - parts or concepts- or is this just sloppy design/manufacture?

fastback
in pic #2 the adjuster is supposed too protude from the tube , when you set it than torque it down it is bound on the threads so it cant rotate and change the adjustment.
I have done away with having to adjust my front mount by making a link rod setup if you are interested in it send me a pm.

I think you lead me to the concept I was missing.

It really it doesn't matter that the bolt and the inner iso aren't tight to one another because the iso unit is held tight to the frame via the end caps - the bolt merely supplies the force to hold the frame tight to the caps.....

Would you say that is correct?

I think you still have a problem. There's supposed to be somewhere around a .010" gap in the ISO adjustment to allow some side to side movement. That means the end cap is not pressed against the frame when properly adjusted. The whole mount should be riding on the mounting bolt and as you pointed out it needs to have a tighter fit at the vernier adjuster hole.

ahh yes... you'll have to forgive me - I have a cold and am a little fuzzy headed today. :?

But you are right - it should be riding on the bolt via the end caps.... (as first stated) so back to my original question... has anyone else out there installed these units??

Yes.....and I wouldn't ever take them out again.
I installed all 3 and it gave me my bike back. Before.....I had a fast Hula dancing thing that wasn't a bit of pleasure to drive. I do rememeber , that it was a bit of confusion as to how they would funtion, but function, they did. Would never take them back out. Money well spent. My bike hadn't been that much fun to drive, for 20 years. Don't worry too much about how and why, just build them in and let us know how the bike feels...bet it will be like a new toy! Best! Piperboy

Thanks for your input Piperboy,

The adjustable ISO seems to be the cat's meow, so on the bike they go, but I really do question why only one collar is tight to the stud?
Can anyone tell me if the later 850 type Iso has similar tolerances on each collar- is this a Norvil or a Norton design oddity?

Judging by the lack of response - my observation is either really stupid or nobody knows what to say!? :wink:

I sent Norvil an email and will post their response when/if I get one.

This is the reply I received today.

I sent another email as this does not answer my question.

After thinking about this for a while I was motivated to take a look at my old Iso's and a new set I got from Norvil.
The old Iso's tube is heavier and appears to be machined from a solid piece of steel. The Norvil's tube is a welded piece of steel, hence the weld seam seen in the photo.
The old Iso has the hole quite a bit larger than the bolt that passes through (I suppose that is to keep the bolt and tube from corroding together as Norvil says). I didn't measure but at least 1/32" larger is my eyeball guess. The Norvil tube also has a clearance between the tube and the bolt by exactly the thickness of the weld seam. In my case the bolt would move around in the Old Iso but not so much in the Norvil, but it really doesn't matter since the bolt will pull the frame tight to the adjuster and hence no movement should be possible whether the bolt has clearance on the tube or not.
Now as you look at the complete Iso assembly you will see there is what appears to be a phosphor bronze washher (quite large) and another steel disc or washer that fits between the adjuster and the carrier(s) on each end of the Iso. These are the pieces that need the .010" freeplay to allow the engine/swing arm assembly to move. Anyway hope this clears up the
question.
As a side comment for those of you still riding on the original Iso's, the ones removed from my '75 were hard as a rock and had an oval shape (no doubt from spending a lot of time on the center stand). I can only imagine at this point what the improvement in handling will be like.

Thanks for the input - every bit helps.

I must confes that I now understand the logic of the vernier system !:lol:

Consider
So to imagine it you could do without the engine mounting bolt if you had a giant c-clamp on the frame at the iso mounting points. (highly impractical)

The engine mounting bolt in the vernier setup serves only one function, unlike the non-vernier iso where the rubbers are using the bolt as an active part of the isolastic system, as well as the tightening force.

give us a buzz when they are in...it will take a few tries to get them adjusted correctly.....but we would be interested to know what you think...as said....I wouldn't take mine out again...best! Piperboy

Fstbk,
The only difference between the vernier isolastic and the shim type is that the vernier sets the lateral clearance by rotating the threaded collar in or out and the shim style sets the clearance by disassembling and adding shims. On both there is a sleeve which bears against the frame tab and is held in place by the through bolt. The vertical movement is limited by the hardness of the rubber doughnuts. [/i]

Thanks again for helping me figure that out, I will let you know when the rebuild is complete! I hope others found it usefull.