What brand brake disc pads is everyone using these days?

And has anyone tried EMGO pads? I noticed that EMGO pads are still manufactured with asbestos, which I thought had been banned - in the US at least? I also noticed that they're relatively cheap, at $11.00 US for a set. So, I'm fishing for feedback before purchasing these cheap pads.

Hi Jason, I stick with the standard issue Norton pads, I did fit a cheap set some time ago -- could have been EMGO brand - very rapid fading under hard braking, ditched that set as soon as I got home, not worth risking life, limb and bike to save a few $.
James.

Hold on now, Jason asked a legitimate question, if I recall correctly the originals where made with asbestos, and if these stop our vaunted steeds better than the some of the junk being pandered on the market, let us here about it. Lets not assume EMGO sells an inferior product.
jerry

I have always used the Ferodo pads (FDB88P). They aren't always easy to find, so I have stashed a couple sets for when I need them.

They are available from Vintage Brake.

I had EMGO pads on my 750 before I changed over to the custom front brake. They seemed to work ok for ordinary riding. I generally don't use the brakes very hard when running the canyons (as discussed in that famous article, The Pace), and I don't do track days.

I can tell you they don't work very well soaked with brake fluid however.

I put a new set of emglo(or is it emgo?) pads on my Norton when I first got it. I didn't know what to expect from the brakes, so I was happy enough with them other than the fact that the front brakes squeaked loudly when applied.
I changed to those sold by Vintage Brake and not only did the squeaking go away, the brake performance improved quite markedly.

The brakes still will fade when really hard pressed though. I was following my high speed friend Robert on his Vincent thru the Duffy Lake Road (It's a beauty) when I lost the brakes on the third hard stop from 75 MPH down to about 10 MPH, steep downhill to boot. His brakes were fine, but mine were overheated so I lost all braking in the hairpin. This was a little scary as the drop off into the canyon below is a couple of thousand feet, very hard on tin work.
Looking at the tiny surface area of the pads, it's a wonder they work as well as they do.
I now try to remember that I have about two hard stops in the brakes and ride accordingly. Most of the time this is plenty.

The Duffy Lake road is a great spot to test brakes, especially when following Robert on his Vincent. Robert's son Jeff was along on a new Triumph Speed Triple. Our old bikes were no match for his Triumph earlier in the day on regular roads, however we left him far behind and scared spitless on the Duffy Lake Road!

I use EBC pads front and rear (Mk3) and they certainly perform better than the Lockheed pads, -along with stainless braided lines and RGM 13mm re-sleeved front master cylinder, it was a definite improvement over the original setup.

Some information available at the INOA site
http://www.inoanorton.com/Articles/index.html

There is a brake pad comparison .pdf

Have an excellent day! :wink:
Steve.

I have always used the Ferodo pads (FDB88P). They aren't always easy to find,
Click to expand...

Ferrodo, then EBC, then Emgo, is my ladder of choices depending on availability and need for performance.

Although they're made in Italy, the Platinum compound pads for the standard Commando caliper appear to be specially made for Vintage brake. I ordered a couple of pairs from the US and am very pleased with them.

Platinum pads for the Lockheed Racing calipers are generally available.

And are those much better than the version without "P" ?

Apparently the FDB88's ("Formula 1 disc brake pads") contain asbestos so they must be very old. (so was the packaging). As much old stuff, it had superior performance but is forbidden now. I mounted them tonight and went for a ride but I didn't have time enough for a complete bedding-in. So it's too early to tell how they perform.

And this is how my new pads-package looked like: 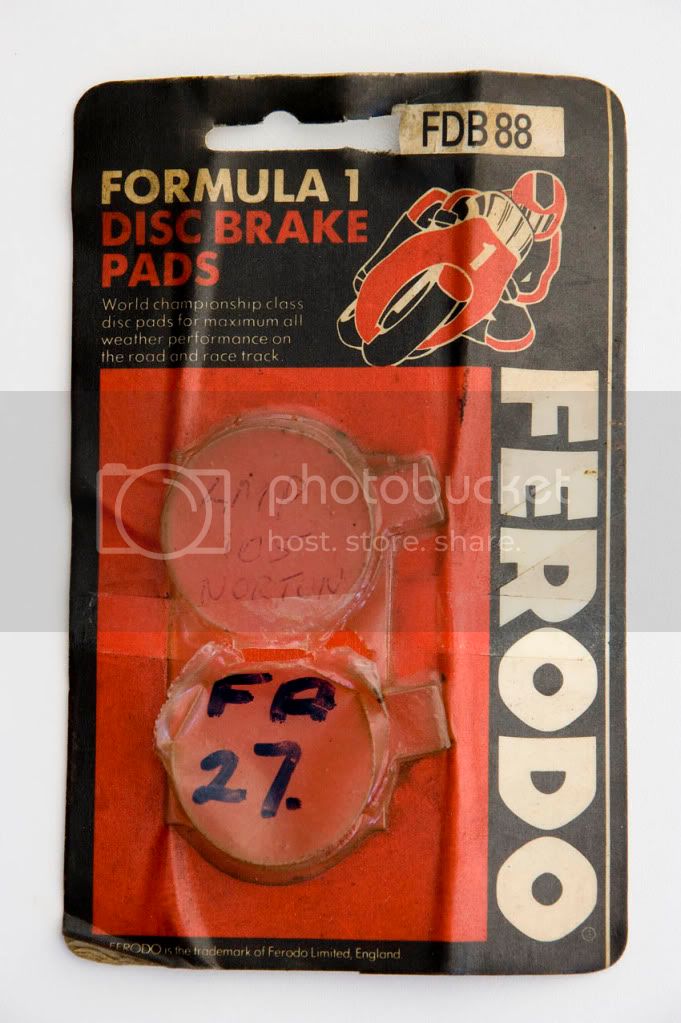 Where the hell did those come from ? :shock:

They should be bedded-in by now. Compared with the ones I had before (unfortunately I have no idea what make nor type those were - probably "standard"), they are not bad at all. Probably even better.
Still no idea how the FDB88 perform compared to FDB88P - anybody :?:

I contacted Vintagebrake and got a quick, nice and helpfull reply and yes, they have the "P" version in stock. As I've subscribed for a track session end of this month, I'm afraid I won't get them in time if ordered right now though ...
Strange that it is so hard to find Ferodo pads in Europe while they are made overhere, aren't they ?

Paul said:
Strange that it is so hard to find Ferodo pads in Europe while they are made overhere, aren't they ?
Click to expand...

As Ferodo is now part of the US Federal Mogul group (along with Champion plugs, AE [Hepolite] etc.) so who knows where they are actually made now! http://www.federal-mogul.com/en/BrandSelector

I'd certainly recommend EBC FA27 (FA027) pads, and you should be able to find those in Europe/UK. Unfortunately the EBC FA27 pads appear to be unavailable in the "HH" compound, which is probably equvalent to the Ferodo Platinums, however the EBCs are in my opinion much better than the original Lockheed APH420GG pads.
You must log in or register to reply here.
Share:
Facebook Reddit Pinterest Tumblr WhatsApp Email Share Link