I have a vibration comming from the 1975 Rodster tank at about 2,500 revs. I have changed the rubbers. Tried really tightening it down hard or backing off a bit to allow the rubber to do its job but it is still there.

Goes away when the tank is half empty so i still suspect the rubbers. How many should there be ? I have 4 between the mount and the tank and one between the washer and the mount.

One niggleing doubt is that the bike only has 2,500 miles from new so maybe the the isolastic rubbers are shot but in every other sense the bike is really smooth. (in a Norton sense

Checked the torque on the Head Steady.

I do a fair bit of town traffic so 2,500 is being used in a semi regular basis and is beginning to spoil an otherwise enjoyable ride.

Any suggestions would be gratefuly received

My own '75 Roadster tank doesn't seem to vibrate that noticeably.

According to the parts book a Roadster or Interstate tank should have four rubber washers on either side (five for Hi-Rider), that is what I have and with nyloc nuts tightened level with the ends of the mounting studs the tank is held fairly securely.

There should be a foam rubber pad (Roadster: 06-2567) under the rear of the tank and that can become flattened and hard after a long period so when the rear strap is fitted to the two rubber A/V mounts (06-0622) the tank isn't held securely at the rear.

Or you could try adding some extra foam padding under the tank to see if that helps?

I had exactly the same problem -- drove me NUTS!,I located the cause of the vibration at the rear of the tank,the rear edge of the tank was vibrating against the large diameter frame tube,I had all of the stock rubber cushions in place but still had to add a piece of rubber between the tank and frame,since then no noise or vibration. Good luck. Ride safely. James.

Canonball,
Have you had a careful look underneath to see if the tank seems to be contacting anywhere ? There are at least three different pressings of Roadster tanks and the stories of Norvil headsteadies not fitting under some of them are not entirely without foundation. There also seem to be some 1973 (Italian ? metric tube ? ) frames with slightly oversize top tubes which doesn't help either but probably doesn't apply in this case.

Some early steel Roadster tanks had a seam round the front edge and at the rear but the rear seam was turned horizontally. These seem to be quite tight underneath.

The most common tanks have a visible seam all round and the rear seam follows the tank shape. Generally quite a lot of space underneath.

The third type that I know of appeared on Mk111s and makes one wonder if they lost the press tooling or something because it looks hand made underneath and most are not symetrical if viewed from above. This type lacks any visible seam around the headstock area and appears to be most prevalent on red, white blue Roadsters, it even appears in the US market "The Ultimate Ride" brochure (although not in the UK "The Powerchoice" one which shows the seamed version.

I found this out, to my cost when I bought a sound undamaged tank and, breaking all my rules, had it refinished, only to find that it wouldn't clear the rear triangulating tubes as the cutouts were not nearly deep enough or well enough defined. The strange thing is that the tank had it's original finish when I bought it and had obviously been fitted to a bike.

My answer was six rubbers at the front above the bracket and two mounted between between the rear rubbers and the tank. I don't really mind this as it shows off the nice anodised Norman White Norvil headsteady but I must admit that if I compare the profile of the tank with a "proper" one, it looks like a badly risen Hovis tin loaf.

79x100 said:
The third type that I know of appeared on Mk111s and makes one wonder if they lost the press tooling or something because it looks hand made underneath and most are not symetrical if viewed from above.
Click to expand...

I have heard that the 'seamless' tanks were manufactured in Italy, although I don't know how true that is?


This type lacks any visible seam around the headstock area and appears to be most prevalent on red, white blue Roadsters, it even appears in the US market "The Ultimate Ride" brochure (although not in the UK "The Powerchoice" one which shows the seamed version.
Click to expand...

Some very early (red?) 850 MkIII's do seem to have been supplied with the seamed tanks and that could have just been due to the company using up their stockpiles of the earlier tanks, and any bikes featuring in the brochures would (I would guess?) be fairly early production (or even pre-production) models?

I don't have any clearance problems at the rear of the tank on my MkIII but it does have the thick Roadster rear mounting pad, the two A/V 'cotton reel' rubber mounts and the centrally curved Roadster tank strap with rubber strip.
The Interstate strap is different I believe and could pull a Roadster tank down too far (and I'm not sure they are correctly labelled on the parts book diagrams?).

I don't suppose that we'll ever really know the answer to this one, but my advice would certainly be to steer clear of the seamless variety if you're looking for a second hand tank. They don't look "Italian" underneath, more like recent pattern Indian sub-continent parts. I'm pretty sure that they are substantially hand-made rather than with proper press-tooling.

I've been back through my brochures again and see that the large fold out "Powerchoice" brochure has a red Roadster without seam and an r/w/b with, whereas the US brochure has the red with and the white without so perhaps it was just random. The white machine on p.131 of "Norton Twins Restoration" looks to be the non-seamed variety. That would appear to be a UK picture, it looks like the back-entrance to the Gus Kuhn workshops.

I wonder if there was a supply problem with Roadster tanks because I have always had the impression that the later Receiver-built Mk111s were all silver Interstates.

79x100 said:
but my advice would certainly be to steer clear of the seamless variety if you're looking for a second hand tank. They don't look "Italian" underneath, more like recent pattern Indian sub-continent parts. I'm pretty sure that they are substantially hand-made rather than with proper press-tooling.
Click to expand...

Well my own seamless tank does appear to be a symmetrical shape and the underside is correctly press-formed, there being no sign of any hand forming so I'm not sure that what you have encountered is typical to all seamless Roadster tanks.

I'll try to make a photograph of the underside of the three different steel tanks that I have. It won't be today though. Maybe there are actually four types (or more !)

L.A.B. How "crisp" are the indentations on yours where the rear tubes of the frame cradle join the top tube ? Was yours on your bike from new ?

To be honest, if the one I bought hadn't come with matching side panels sharing what was so obviously original paintwork, I would suspect that mine had been "got at" but I have seen three or four "seamless" at jumbles since and they have all looked a bit "iffy" and they are not baffled internally. (The seamed tanks have a baffle plate visible through the filler opening).

I may have been a bit over-disparaging of the quality of the seamless tanks but to be honest, I'm still angry with myself for not checking the fit before splashing out on a paint job

I doubt that the tank on my bike is the original (as I have a feeling that it could have originally been built as an Interpol model).

Ok then, here is my tank:

There are a few small ripples in places around the area of the rubber mountings, but these would seem to have been made by the forming process rather than by hand.

Mine's an earlier glass tank and has two of those pads, one at the front like yours and another further down the spine. It's about half as thick and 50% larger in surface area. The tank is an easy snug fit over the tube, with no wiggle room or slop to speak of. I have two rubber grommets on each of the front studs and the rubber band at the rear per standard for a roadster and no vibration in the tank. Your pic only shows one pad so maybe thats your issue?

DucsandNortons said:
Your pic only shows one pad so maybe thats your issue?
Click to expand...

??
I don't have a problem, my tank sits fine with no vibes, it is canonball that has problems.

Thanks for the help lads.

I have replaced all the pads and rubbers with supposedly genuine parts but the foam pad at the rear is no where as thick as the one in the picure and maybe not as hard.

Mine also compresses really easy so i will try and source a better pad for the rear.

I think that the one in the picture is correct for a roadster (I have something similar) The thinner pad is probably Interstate. Don't quote me though because I've never owned one!

As an experiment though, you could stuff under the tank with old socks or something just to see if it helps

I've stuffed old socks in some funny places during my days of playing in a rock band, it certainly worked for me! However for this problem I have had some succes with sticking foam tape on the edge of the two frame tubes that join the backbone under the tank just ahead of the seat /tank junction. 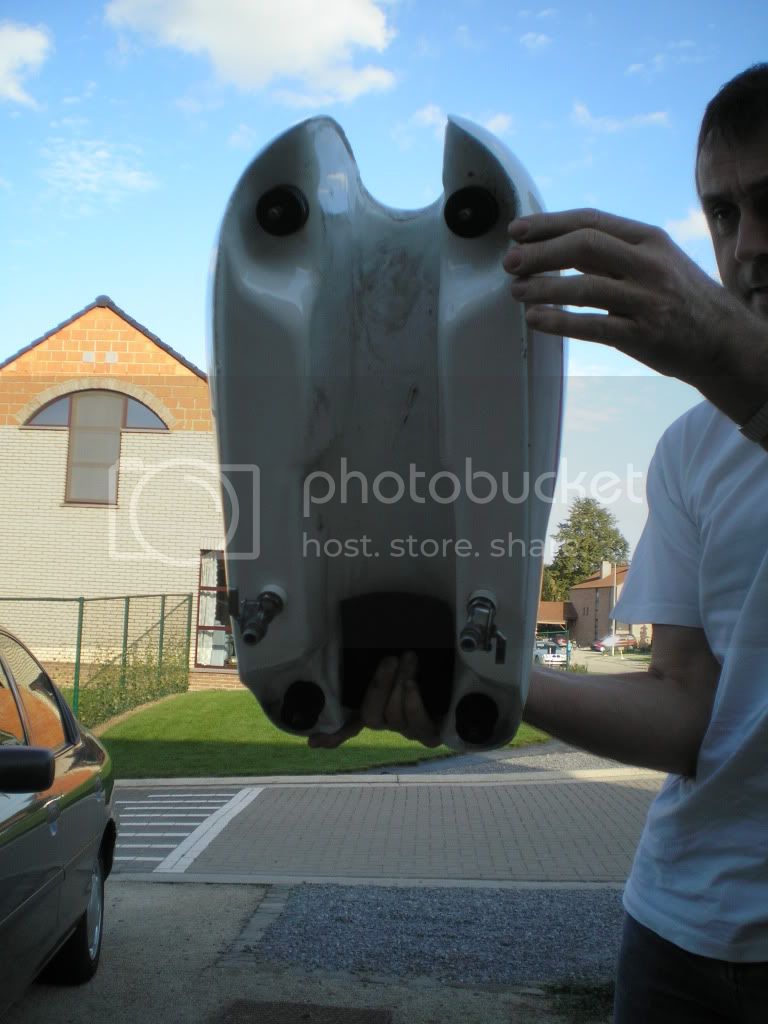 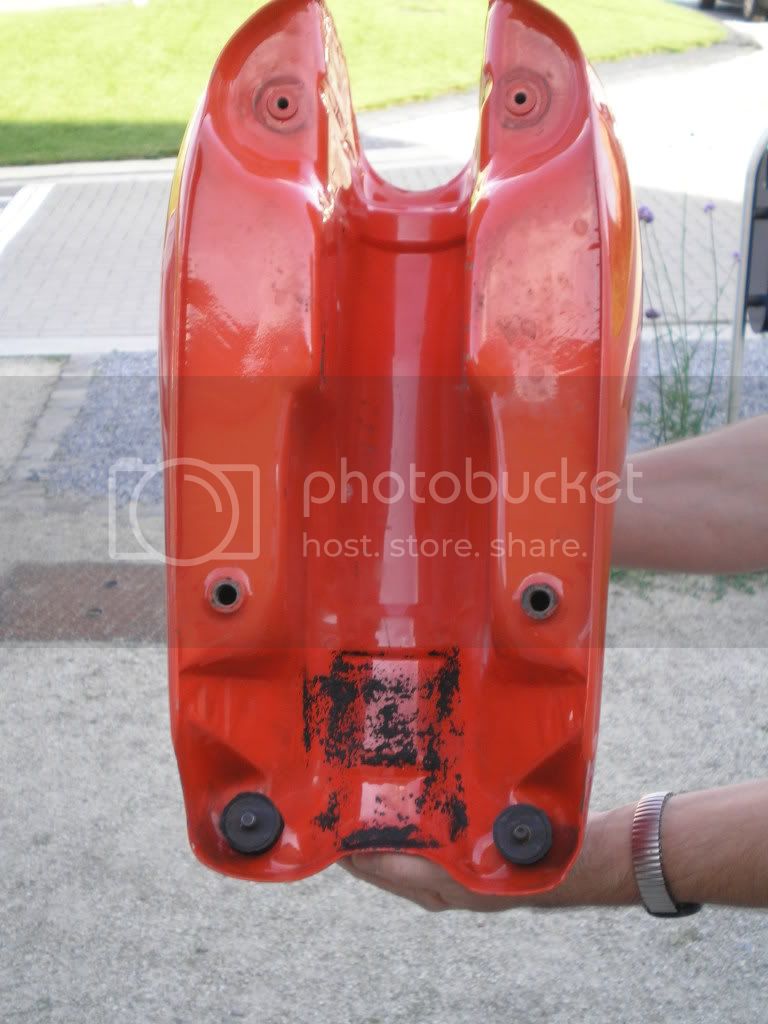 This is the underside of what I would regard as the most neatly formed tank. It is also baffled internally which the "seamless" tank isn't. 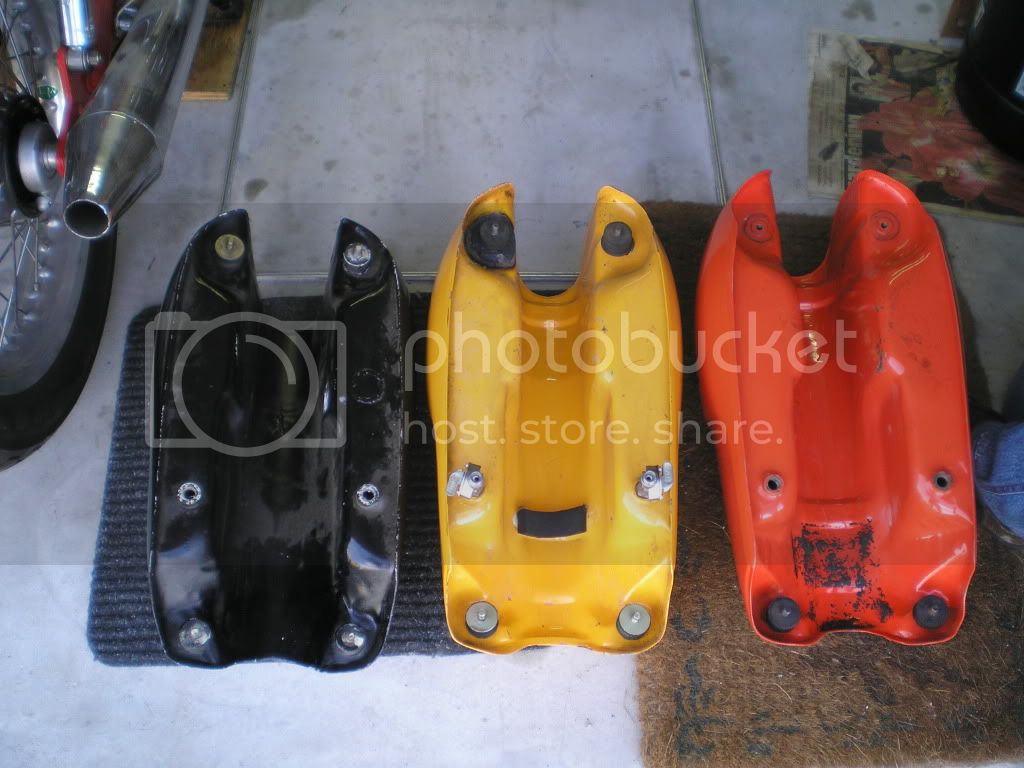 This shows the three types that I have come across. The black tank is seamless, the yellow has a front seam but the rear is folded outwards rather than remaining in line with the tank side. I have seen a couple like this and it doesn't look like damage.

The orange tank is my favourite. A really clean sharp pressing and the knee cutouts start at the same point when viewed from above.

Fixed the tank vibration. Needed to put 2 more rubber washers under the front mounts as one side was close to hitting the reflector.

Tried the sock trick and it worked a treat so i looked around for some decent rubber to replace the supposedly new one i had bought.

couldn't find anything to hand until i spotted the wifes black flip flops. Cut to size under the rear of the tank. No vibration.