a paint question for all you fastback experts

I'm restoring my 69 fastback and I have a question about paint color. This is how I bought it--black with gold pinstripes. The paint was obviously very old and I assumed it to be original. The stripes were professionally applied and perfect (and very old). But my research for 69's don't show a black color option. Interestingly, in the first couple of pages of the Haynes manual, there is a picture of my paint scheme on an early fastback. When I stripped the paint, the tank and tail were red gelcoat. Any body with knowledge? 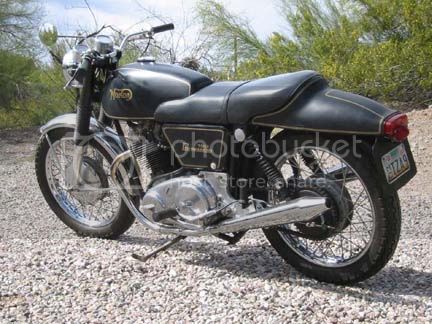 A close buddy has an very early 69 that is black, BUT originally it was RED.. He says ALL the literature he has researched (and he does ALOT of that!) from 69 showed RED ones.. But, he saw both (100% original) RED (non flake) & BLUE (Metal Flake) 68's at the last LasVegas auction.. Just when you think there is a definitive answer in the world of Norton manufacturing, some exception pops-up.....
And gosh knows, you can't trust Mr. Bacon either !!! Best of luck!

I have done considerable research in preparation to building 3 '68 fastbacks and the best I have come up with is this. All 1968 models with the exception of the Earles Court show pre-production model were red tank and tail section with silver oil tank and side cover. These models also had the plastic badges. The frames had the sheetmetal headstock gusset and most were replaced by the end of the '68 model run. In 1969 the colors were red with black oil tank and side cover and later a British Racing Green option and a silver flake with candy red panels. Both the latter are pretty rare as most were red with black. These models lost the badges (no pun intended as the early model was prone to them falling off) and used the traditional Norton decal. Some time late in the year and through the 1970 model year the headlight ears and fork shrouds were chromed.

If some one can add to this or correct this, I'm always interested. Keep in mind that there often were leftover models that were titled later, but I base my findings on build date and serial numbers.

Ron L said:
All 1968 models with the exception of the Earles Court show pre-production model were red tank and tail section with silver oil tank and side cover.
Click to expand...

Green was also listed for '68 models (Roy Bacon), and I remember seeing one a few years ago that appeared to be in a very original condition with a low engine number that had been brought back from the USA, although the dealer wanted far too much money for it so I didn't take much interest in it at the time.

Did it have the badge recesses? The only green ones I have found were smooth tanks with decals rather than badges, hence the '69 model designation. As has been mentioned before, Roy Bacon is a good resource, but hardly completely accurate.

It was about seven years ago so my recollection is a bit vague, but as far as I remember it was an unrestored Commando 20M3 with the Dominator silencers and I *think* it was a round badge tank (and I think the badges were missing?) with a very low production number, that is why the dealer wanted a fairly high price for it (£3600GBP -I remember that, which was a bit high for that time!) but there is no way I could say that it left the factory as a green model.

There's a green round badge (20M3) model shown in Don Morley's Norton book but it is probably a restored bike, I would expect a restored bike to have the correct colour scheme but-who knows!

'69 Fastbacks in *BRG were certainly fairly common in the UK (I seem to remember as most early UK Commandos were Fastbacks until the Interstate model came along).

Actually it was over nine years ago! Bl**dy He*l doesn't time fly when you're enjoying yourself!

As well as Roy Bacon, authors Jeff Clew, Steve Wilson and Mick Duckworth all mention either 'Green' 'Dark Green' or 'Forest Green' as being a '68 model colour in their books.

All of this is speculation. If you want to know what color your machine was exiting the factory, you can confirm that from Neville Hinton of the Norton Owners Club in England. He oversees the Norton factory records which for Commandos does include body type and original "colour". The catch is you have to be an NOC member to take advantage of the service and need to provide him with the engine/frame number.

From your description the orginal color of the tank you have was likely red, but do you know for sure it was the original tank?

I'm pretty sure the tank is original--it's condition and gel color match the tail section. I still find it curious about that photo in Haynes manual...but I suppose that could have been a custom job as well. I'm still probably going to paint it black--just cause I like it

Hi All,
I just bought a 69 fastback this weekend! It's red with white (2 tone) on the tank & tail piece & has white side covers. Looks great!
Does anyone know if these are stock colours??

I will post pictures when I figure out how.

You need to open a photo album account (normally free for the basic service with something like 'Photobucket' http://photobucket.com/ etc. ) and then upload your photos to your new online album.

Then you need to insert (copy and paste is easiest) the photo/s 'IMG' address/es into your message (for this type of message forum), that will display your photo/s in your message (some website boards only allow a link to be added). And I find I do not ...(and re-size them if necessary) here for you.

I see lots of references to the red early fastbacks here. Were they all Candy Red?

I'm about to paint mine. I want it to match the picture on the September 1968 cover of Cycle World.

Any one have a manufactures paint code or any other suggestions on getting the color close to correct?

This reply is way overdue, and I don't even have an early Fastback,
but the red colour was a solid red, not a candy apple type at all.

Other threads on this subject have also mentioned the 2 tone red flake tank with silver flake panels on the side on Fastbacks made in limited quantities for 1969,
mostly for export markets ? Factory adverts for this scheme appeared, so this was a genuine factory done colour.
You must log in or register to reply here.
Share:
Facebook Reddit Pinterest Tumblr WhatsApp Email Share Link