Hi John. They are pretty lumpy, aren't they? I'm pretty sure the regular RD springs I've been using for so many years will not be up to it. I'm expecting to need to run it to at least 8000 rpm, and maybe 8500 rpm, to get max horsepower, and I'll be looking for a better spring package. At the moment, the options look like beehive, conical, or just some stronger conventional coils. RD has a NASCAR spring set that will fit that I think might work.

Yes, as I understand it, the beehives/conicals offer a longer wire/spring, that compresses into its center, so the uncompressed/early lift pack can be lighter while the full lift/compressed control is heavier. Dr. Taglioni, looking at hairpin springs and a valve box he designed for them, found a different way to get his valves to follow square cam profiles.

Pics of the cylinder with Timeserts and BSA lifters.

I've ordered the IRL springs from RD, but they are backordered a couple of weeks. They have a beehive spring that I might try. Zack at RD says it can be made to fit, but has a little less spring pressure. I'm a little nervous about the lower spring pressure. I have some beehive springs from Compcams (4.6 Moduular Ford) that can also be made to fit, but they require raising the collet groove on the valves, and are also slightly lower pressure. I know from other builder's experiences that the IRL springs will let the N480 cam rev high enough without float, but it's always tempting to try something new.

In the meantime, I'll be rummaging around for all the timing side bits, as well as rocker arms and such for the head. That's one of the problems with putting an engine together from parts, as opposed to starting with a complete engine.

Yes, there's an appeal to figuring out how best to make what you already have work

Time for another update. I just assembled the engine to check valve to piston clearances, and found a few issues. This is the engine and head ready to assemble, with clay on the valve notches 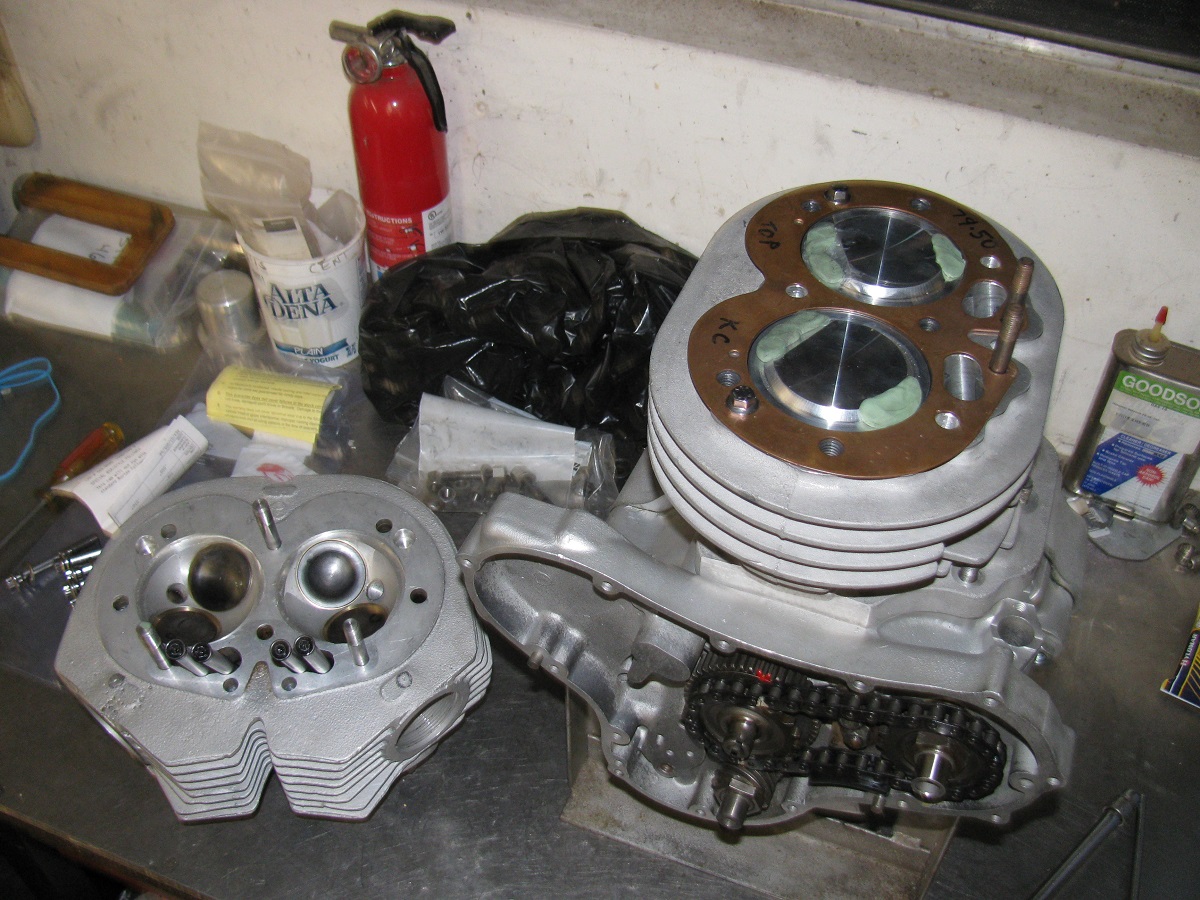 After assembling, I discovered that valves were hitting the pistons right at the edge of the valve notches, stopping the engine from rotating. I also discovered that there was an interference problem with the intake pushrod ends hitting the pushrod tunnel. The cup ends on the pushrods for use with the BSA lifters are a little larger in diameter than the stock Norton pushrod ball end, and it looks like Steve machined the tunnels for a fairly tight fit around the stock pushrod ends. This is a picture showing the end of the BSA lifter too close to the edge of the tunnel. The one on the left is the worst. There are marks on the pushrod end where it was scraping against the tunnel, but they might not show up so well in the pictures. 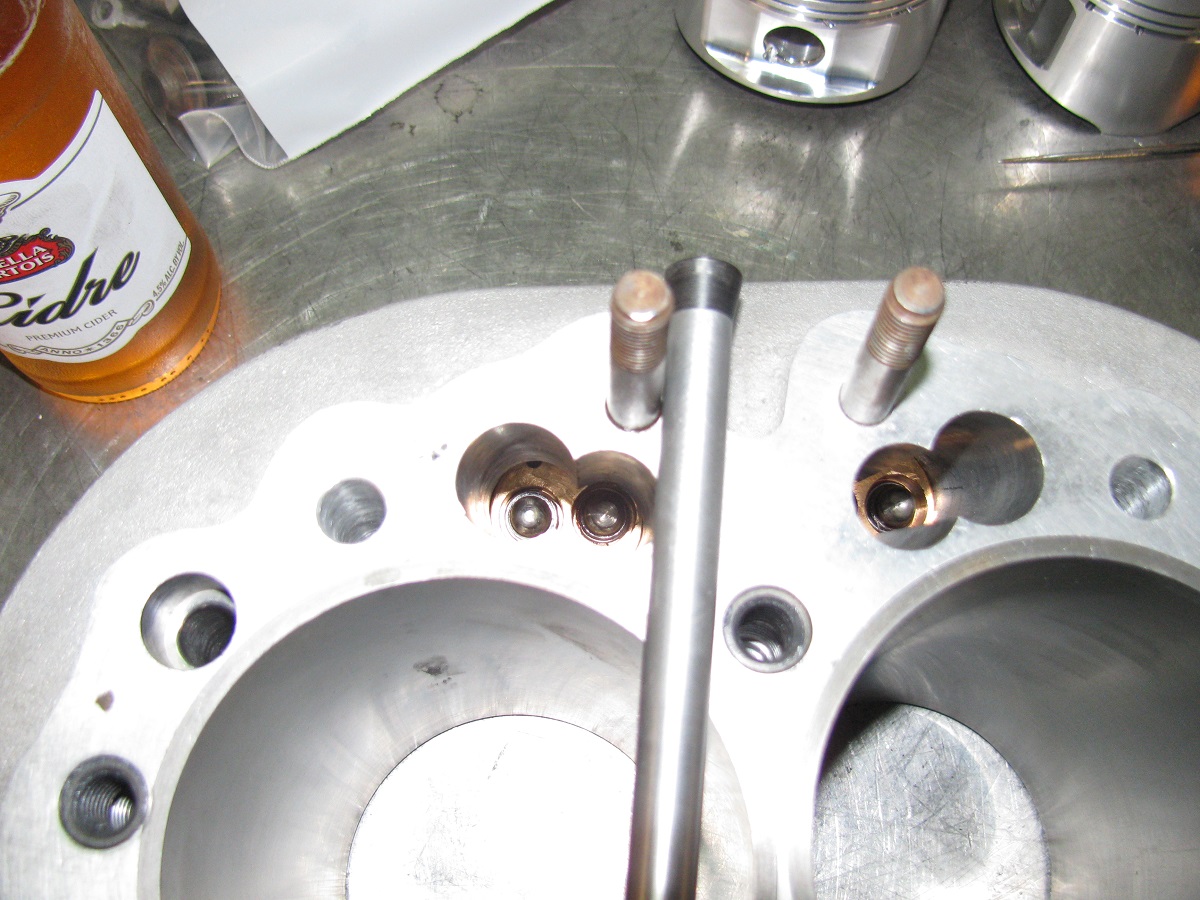 There was plenty of material at the bottom of the tunnels, so I used a die grinder and long carbide cutter to open up that area. It seems to have plenty of room now. The valve to piston clearance will require opening up the valve notches a bit. When Steve and I settled on the piston design back around 2000, we made them large enough to work with his big valve head conversions, assuming a normal race cam was used. I've pushed the pistons up a bit higher in the head for more compression ratio, and am using a really extreme cam, so there's just not enough relief in the piston. This picture shows the use of a pointed punch to mark the center of the valve head on the piston, for use in setting the piston up later on the mill. 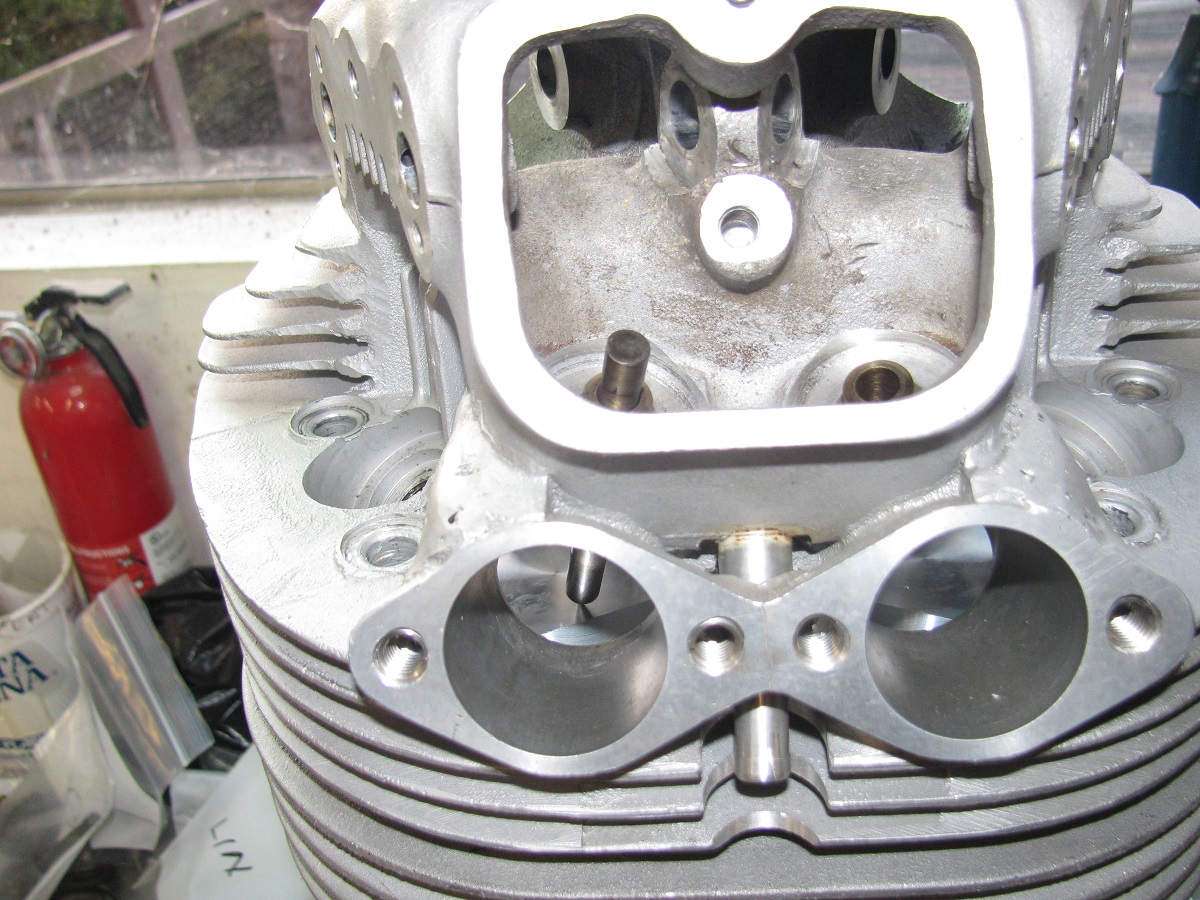 Next step is to open up the notches on the mill, and test fit everything again. Once I have the notches large enough in diameter, I may also have to cut them a little deeper, but I don't want to do that without test fitting first to see if it's necessary. Building a new engine from scratch like this requires lots of test assembly to get everything right.

Ken, nice to see you're back at it; this is a great project.

when it get's finished, what class are you planning on running it in?

Mark said:
when it get's finished, what class are you planning on running it in?
Click to expand...

750-MPG first, and then 750-MPF with the nitrous kit installed. Current minimums (there are no records in the classes yet) for records in these classes at El Mirage dry lake are 120 mph and 127 mph, resp. Should be really easy to run above those. I've run in the high 120s there with the same bike with a less modified short stroke 750 engine on gas. The reason there are no records is that SCTA only added the modified classes to this event in 2017. When we ran before that, we had to run the bike in the altered class (750-APG). It's a little different at Bonneville. The current SCTA records (Speed Week, World Finals, and USFRA World of Speed events) for the classes are 137.872 mph and 138.491 mph, resp. The AMA records (Bonneville Motorcycle Speed Trials meet) are a bit tougher at 159.903 mph in the gas class, but only 130.969 mph in the fuel class. Could be a fun year.

Correct me if I am wrong, but I see no bottom lip/ridge to retain the oil on the crankcase where the camshaft threads through?

Bernhard said:
Correct me if I am wrong, but I see no bottom lip/ridge to retain the oil on the crankcase where the camshaft threads through?
Click to expand...

Sorry, Bernhard, but I don't understand what lip/ridge you are referring to. Could you explain a little more, please?

Standard engines have a small raised ridge to retain some engine oil for the camshaft , this has been raised in other places on this website.

A little more progress, but it goes slowly. I decided to just work on one of the intake valve piston notches without any of the other valves installed. After several assembly/disassembly cycles, this is what I ended up with. The piston on the left is the original 79.5 mm JE, the center is the same after turning down the outer edge to get the squish right but keep a dome in the center to keep the CR high. The one on the right is the same after cutting the valve notch to give .060" clearance between piston and valve along the valve axis, and .040" in the radial direction. 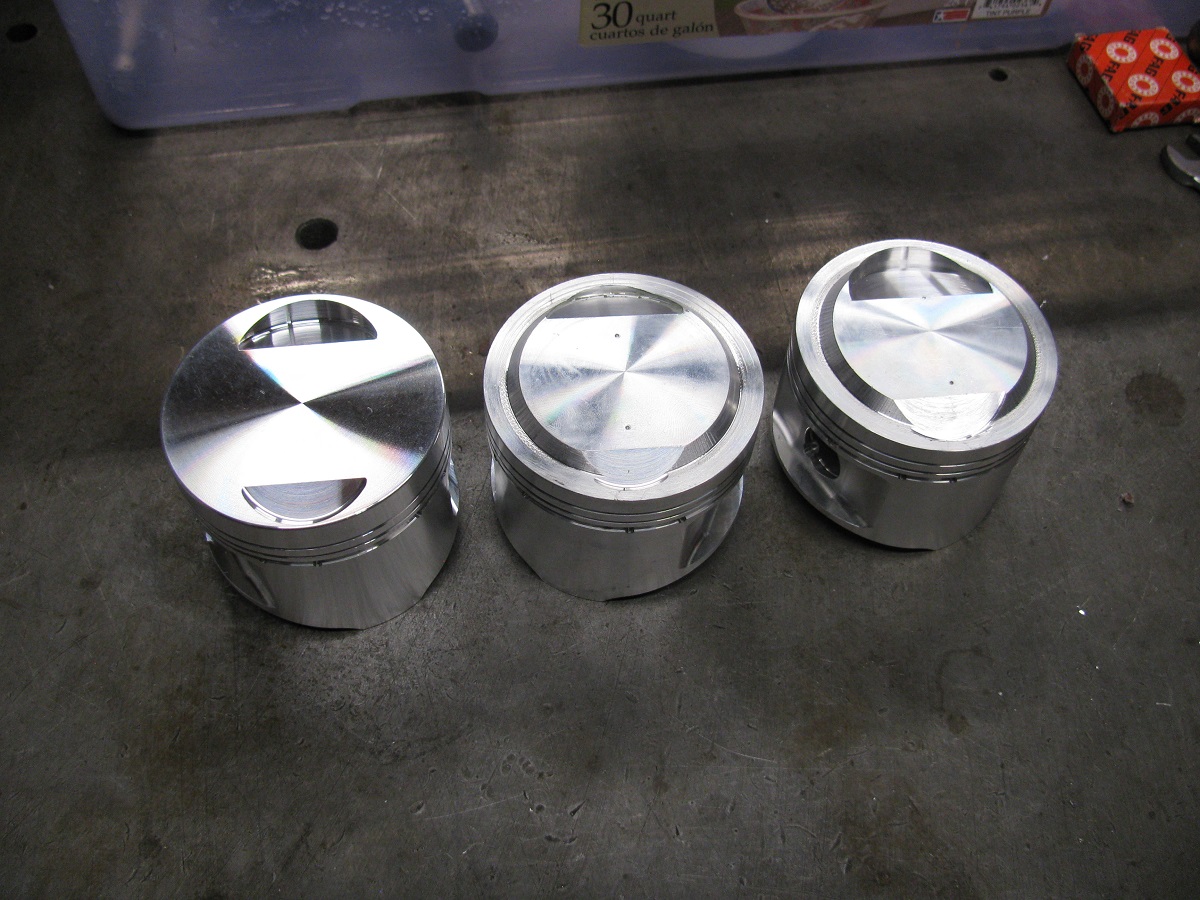 This is the setup I use to cut the notches. 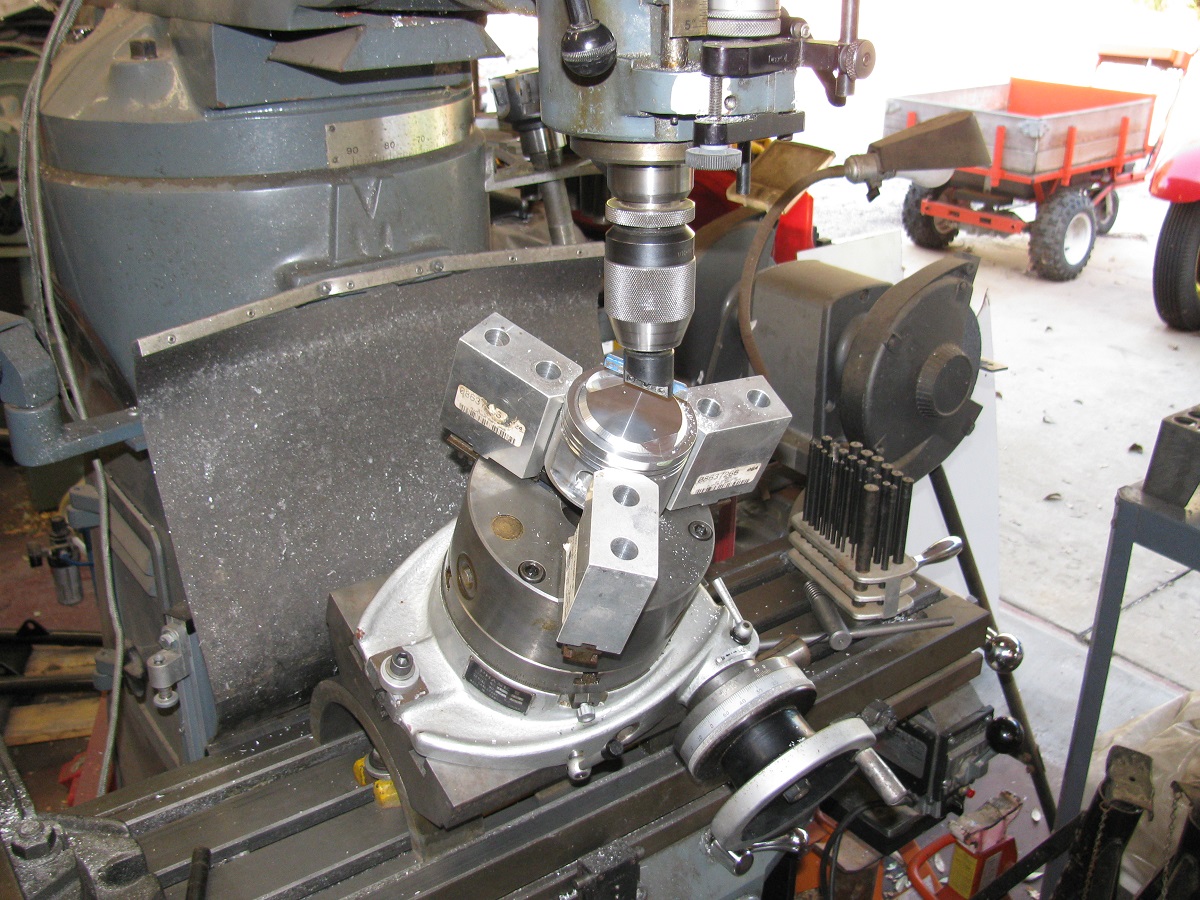 The notches for the intake valves are done on both pistons. Now I have to go through the same process for the exhaust valves, but that should be a little less touchy. The problem with the intake valve notches is that they get quite close to the back of the top ring groove. I only have .125" of alloy between them. I think that will be ok when running on gas, but I'm a little worried about burning through when running nitrous. Guess we'll just have to try it out and see. Target date is May 19-20 at El Mirage dry lake meet.

If you’re concerned about heat Ken, why not coat / treat them?

Fast Eddie said:
If you’re concerned about heat Ken, why not coat / treat them?
Click to expand...

That's a thought, Nigel. I worry a little about ceramic coatings flaking off, but maybe I'll give it a try. This isn't going to be a high mileage engine

lcrken said:
That's a thought, Nigel. I worry a little about ceramic coatings flaking off, but maybe I'll give it a try. This isn't going to be a high mileage engine

Same here Ken, that’s why I went for the anodising based treatment instead after my flaking issue!

The DiamonDyze treatment that I use has the added benefit of protecting the ring lands from wear as well.

These are the final cuts on the pistons. 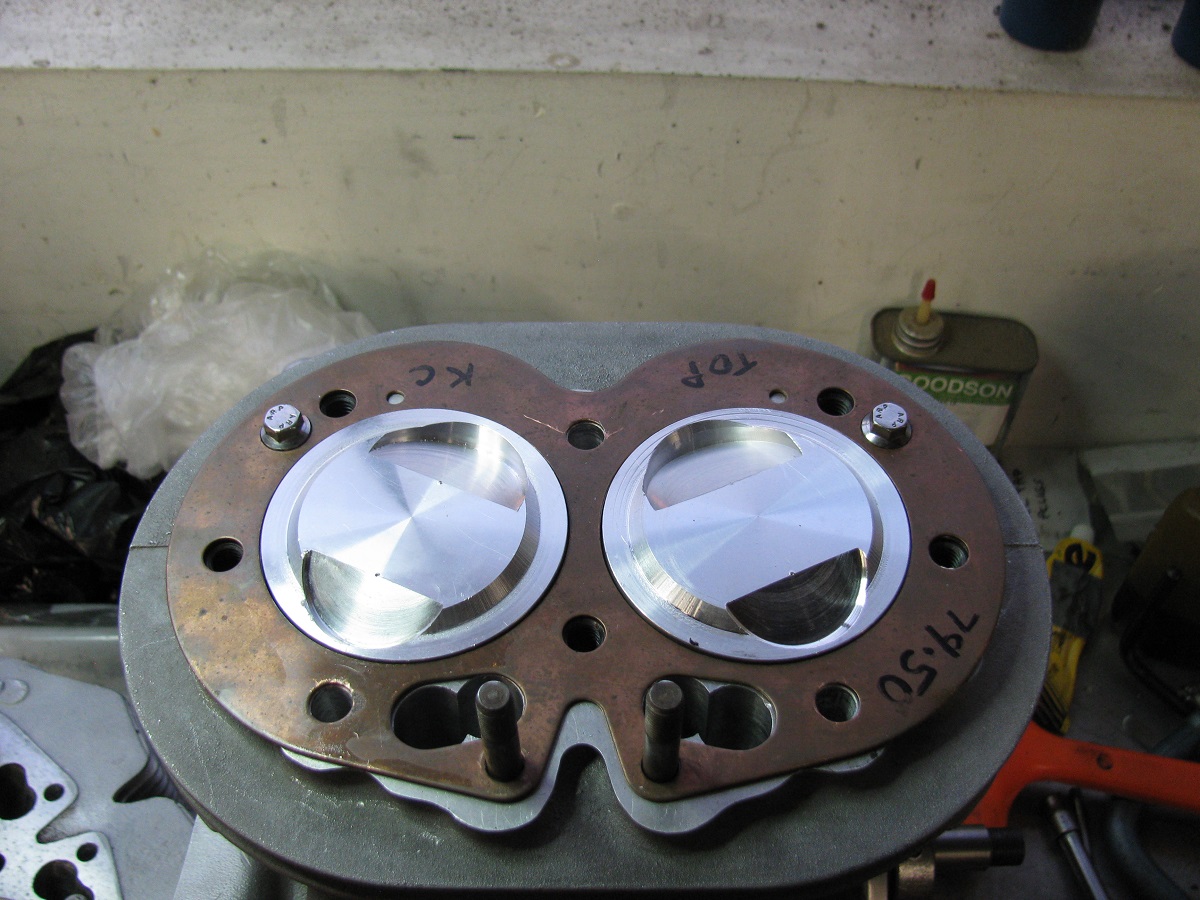 And this is the setup for checking valve -to-piston clearance. For the radial measurement I use clay. 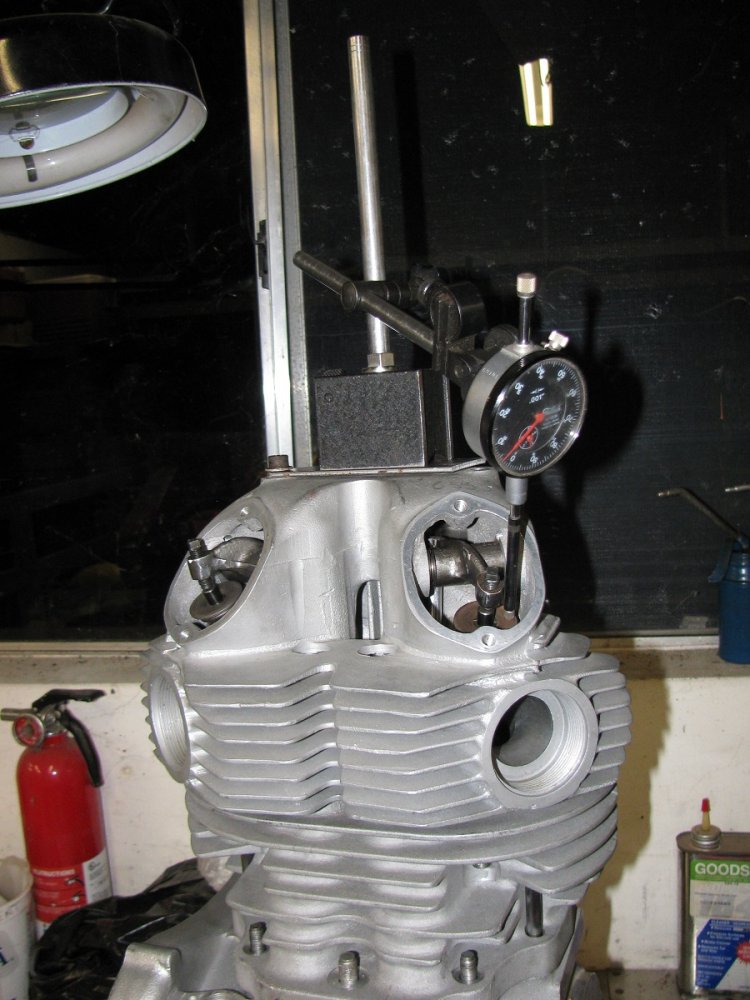 Now I've got to move on to the head work. It looks like my guess at the pushrod length was about right, but I wasn't so lucky with the valve-to-valve interference. On one side the valves just barely clear each other, and on the other they touch enough to leave marks. That's one of the problems with trying to run maximum valve sizes and killer cams at the same time. I'm going to have to at least sink the exhaust valve some to get clearance, and might have to also sink the intake a little, although I try to avoid doing that. I'm thinking of also getting the BSA lifters re-ground to a smaller radius. That's the setup I had on the 920 with the Sifton 460 cam, and it had enough clearance. If I were doing it over, I'd just go with a smaller exhaust vavle, but it's too late for that. The port throat is already sized for the larger valve. Hey, if it was easy, everyone could do it!

Ken, how about only grinding the exhaust lifters down and leaving the inlets as is?

Fast Eddie said:
Ken, how about only grinding the exhaust lifters down and leaving the inlets as is?
Click to expand...

That's an idea I hadn't considered. Unfortunately, without some serious math programming, I don't see an easy way to evaluate that ahead of time. I'd have to just have the exhaust lifters ground first, assemble the engine, and see how much it helps, then do the intake lifters later, if needed. I really need my own surface grinder and some tooling, but that's not going to happen any time soon. The stock BSA lifters have a 1.125" radius, and I probably need to have them re-ground to a .875" radius, like the ones I use with the Sifton 460 cam. That's the radius Jim Schmidt recommends for the N480 cam to prevent valve clash, and it looks like he's right, at least for the big valve setup I'm using.

In hindsight, I should have known I would have this problem, and just had the lifters reground right from the start. I recently used the same Maney Stage 3 design head on a 1007 engine, with a milder cam (Axtell), and still had to sink the exhaust valves some to get enough valve-to-valve clearance. Should have remembered that. Live and learn.

This problem does demonstrate the tradeoff between big valves and big cams pretty well. Can't have both without some sort of compromise.

So, I'm off to find someone to grind the lifters.

Good stuff, Ken. I'm glad that I am experiencing it vicariously.

xbacksideslider said:
Good stuff, Ken. I'm glad that I am experiencing it vicariously.
Click to expand...

Then it works for both of us. I actually enjoy experiencing it. It's the challenge of making push-the-limits stuff work that appeals to me. Of course, sometimes it just doesn't work, but then it's still a good learning experience.

Time for an update. I had Jim Comstock grind some BSA lifters to a .875" radius, and re-checked the valve-to-valve clearance. Still not much, ~.020" and .025". I cut the exhaust seats about .020 deeper, and got closer to .030" clearance. I cut them another .020", and I expect to see something like .040" clearance, and I'll settle for that. I do need to make some longer pushrods. I didn't get it quite right with the last set. Then I get to assemble it all again, this time with the race springs, and check the clearance. If it's all good, I should be able to do the final assembly and put it in the bike. At this point, I'm planning to run it for the first time at the Bonneville Motorcycle Speed Trials the last week in August.

This is a picture of the head with the exhaust seats sunk the additional .040". 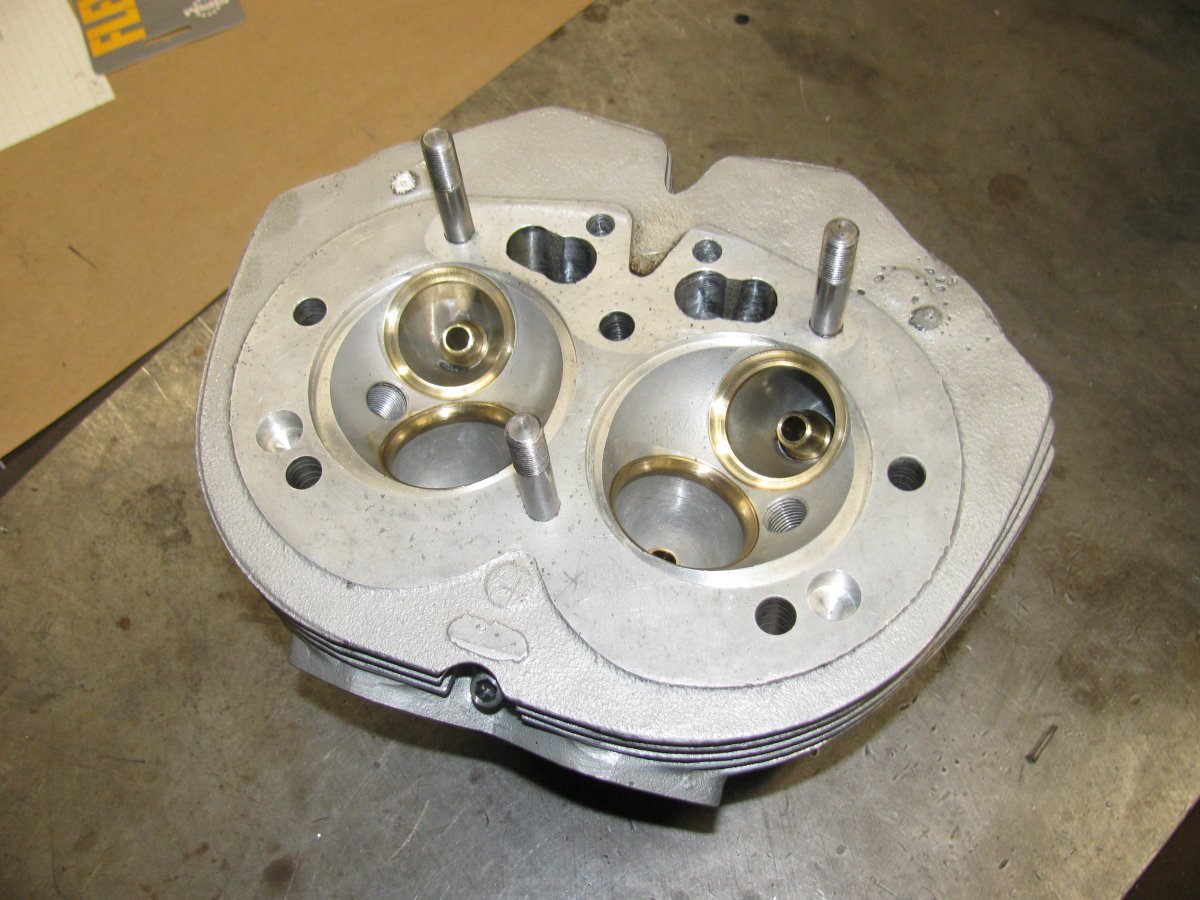