It will also be interesting to see how it stacks up against Norton's new 650 twin. Something tells me these bikes are all "Born to be Mild" and compete only against each other. Why else, with all their combined history, aren't these 750s? Too much reputation to live up to? Triumph went the opposite direction with their engines and INCREASED displacement compared to their forebears. Instead of a 650 twin, you had an 855, Instead of a 750 triple, they made a 900.

I saw the 650 up close last December at the IMS in NYC.
Its classic styling is appealing, and I didn’t see anything on the bike that popped out as obviously cheap or crappy.
I think RE is learning just what the MC market will accept, and now doing a good job of building and delivering it to the market.
The 650’s mild power and performance is appealing to new riders, and hipsters - who dig the retro styling.

The pending Norton 650 will be in a whole different class, performance and cost wise.
The Norton will be a modern 4 valve, DOHC, liquid cooled machine.
The base model is supposed to have 70HP, with a higher powered 100HP performance model.
Garner also said a supercharged model is planned as well.

One can only imagine the price Norton will ask for the new 650.
You will probably be able to buy at least 2 Royal Enfield 650s for the price of one new Norton 650s.

I like the look of these bikes although I haven't seen one in the flesh, not sure about the rest of the world but over here 650 is the max size for a learner., so a whole new riding market there. and I recently did a ride in Tasmania on royal enfields but on a classic 500 the guy that ran the tour Matt from Nevermind had a fair bit to do with them and sells royal enfields and conducts tours said they were aiming at getting new riders into the market so I think a 650 makes sense

I was casually interested in the classic 500 (chrome) but couldn't deal with 27HP! I love the look of the GT (500) but, again couldn't accept 29HP. The new twin seems a real possibility to me at nearly double the power BUT in the pics I've seen, the style/color is not nearly as attractive to me as the 500 cc versions - Red GT, chrome Classic.

But I AM interested and when they show up in the UK (weird, having to WAIT for a Royal Enfield motorcycle to be available in the UK), I want to take a close look at one in the flesh and take a test ride. I think it might be a fun bike for use here on non-M roads.

I read that the twin weigh 449 lbs which strikes me as pretty heavy for a 650 - an 850 Commando weighs less. But it looks like it could be some fun. I don't know anything at all about current RE's (or old ones) as far as build quality, reliability, etc... But I saw a red GT hustling around the IOM two years ago and I thought, "that thing looks really cool!.

A better way to go, it appears to me after several days of extensive research, is to buy a used 500 Classic (or Continental GT) and purchase the Hitchcock 612 kit for the bike. You could buy the bike/kit for about the price of either motorcycle new but end up with 40 HP at the rear wheel, as opposed to around 20-25 for the stock bike. That would make respectable performance. The GT would be a genuine cafe bike, capable of the Ton, as any real cafe bike had to be.

You could probably just buy a used beefed up RE single if you looked around. Performance wise I dont see how the ton makes much
sense in today's road world. Good power to 80mph and job done I think. Not sure about the longevity of the H. kit but at least he
would be there for support.

Intellectually I agree re performance to 80MPH but my inner demon tells me the bike has to be able to do the ton to be called a cafe racer. FWIW, I saw a UTUbe video on a much-modified GT at the Bonnevile salt flats and it didn't break the ton - got to 98MPH and change. However, rolling resistance on the salt is higher than it is on pavement so I suspect that the GT with the Hitchcock 612 kit could break the ton on pavement. So it would be a genuine Ace Cafe Rocker ton-up bike!

I'm quite interested in this as a possible project, primarily based on that old motorcycle adage, "It's better to ride a slow bike fast than a fast bike slow.

Projects are fun. Costly usually but fun and fun is what it is all about.
The old adage sure is right!

A 350cc Manx turned out about 40 BHP. That is enough for anyone to do themselves a mischief. If you can use that to the limit on twisting roads, you will be going fast enough. Blasting down a freeway at the ton on a superbike, does not take much skill. That Royal Enfield Continental GT has got a lot of potential, but any two-stroke would make it look stupid speedwise. You need to have your bike in comparable situations to see if they are better or worse than others. A 500 mile race on winding roads - Continental GT vs Yamaha 250cc twin cylinder two-stroke might be interesting.

Or, for a third bike a 250 Ducati Desmo…..which will blow these two bikes out of the water…

This was on yahoo just a little while ago. 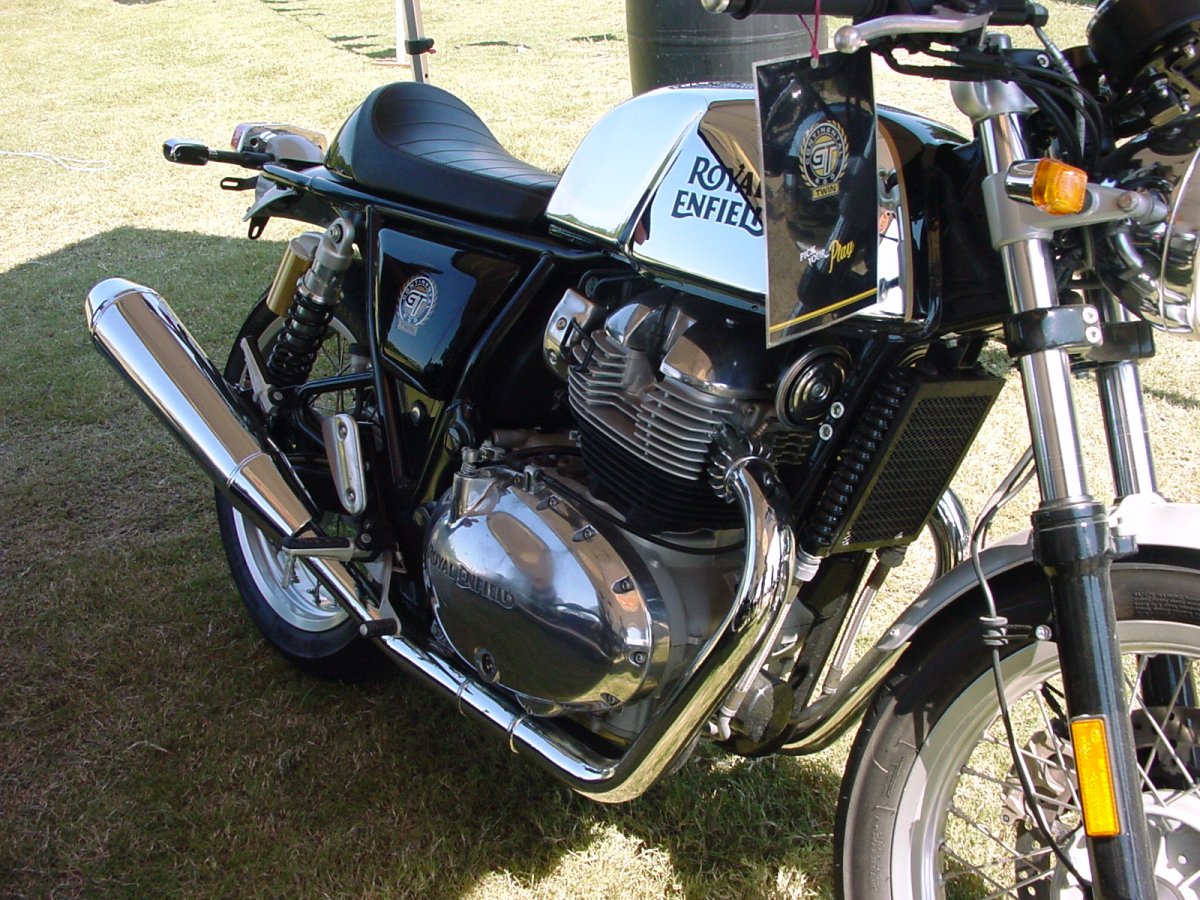 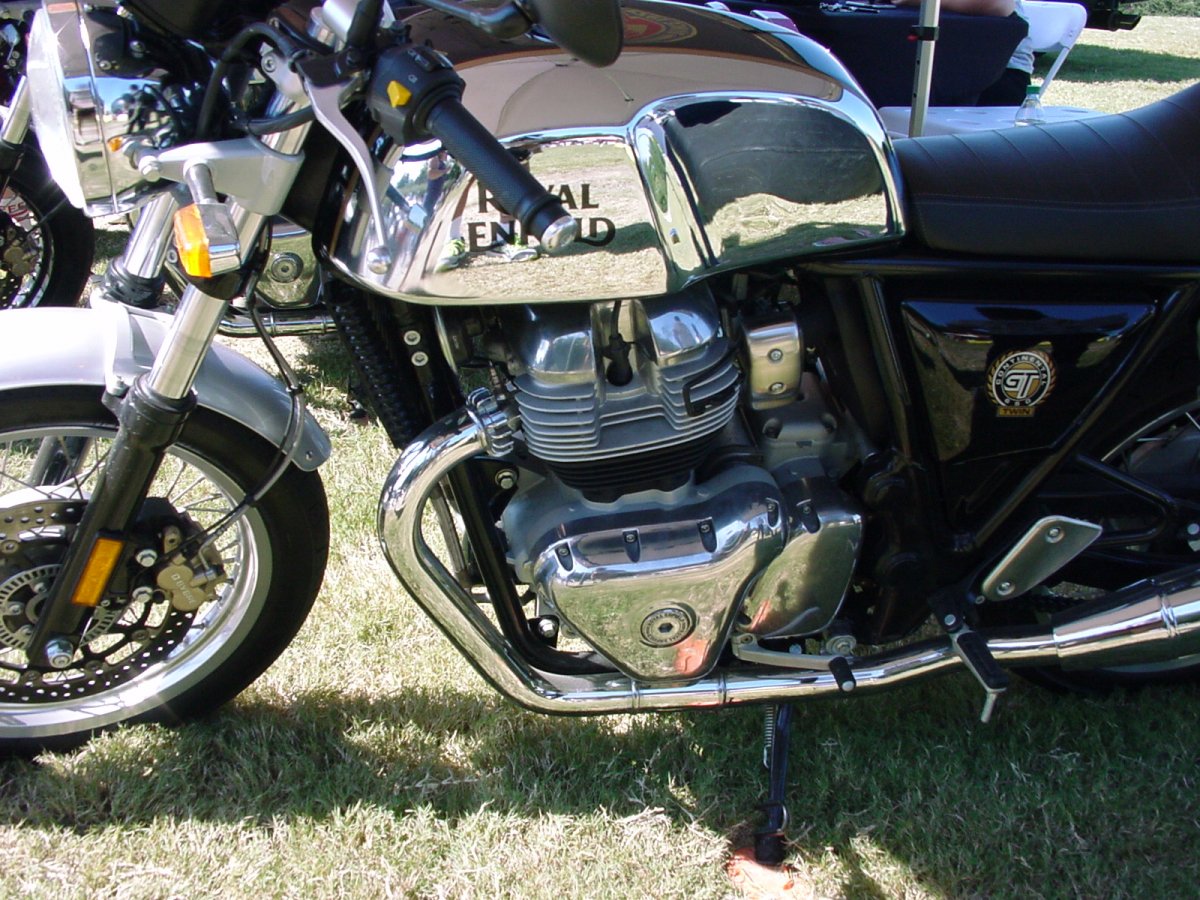 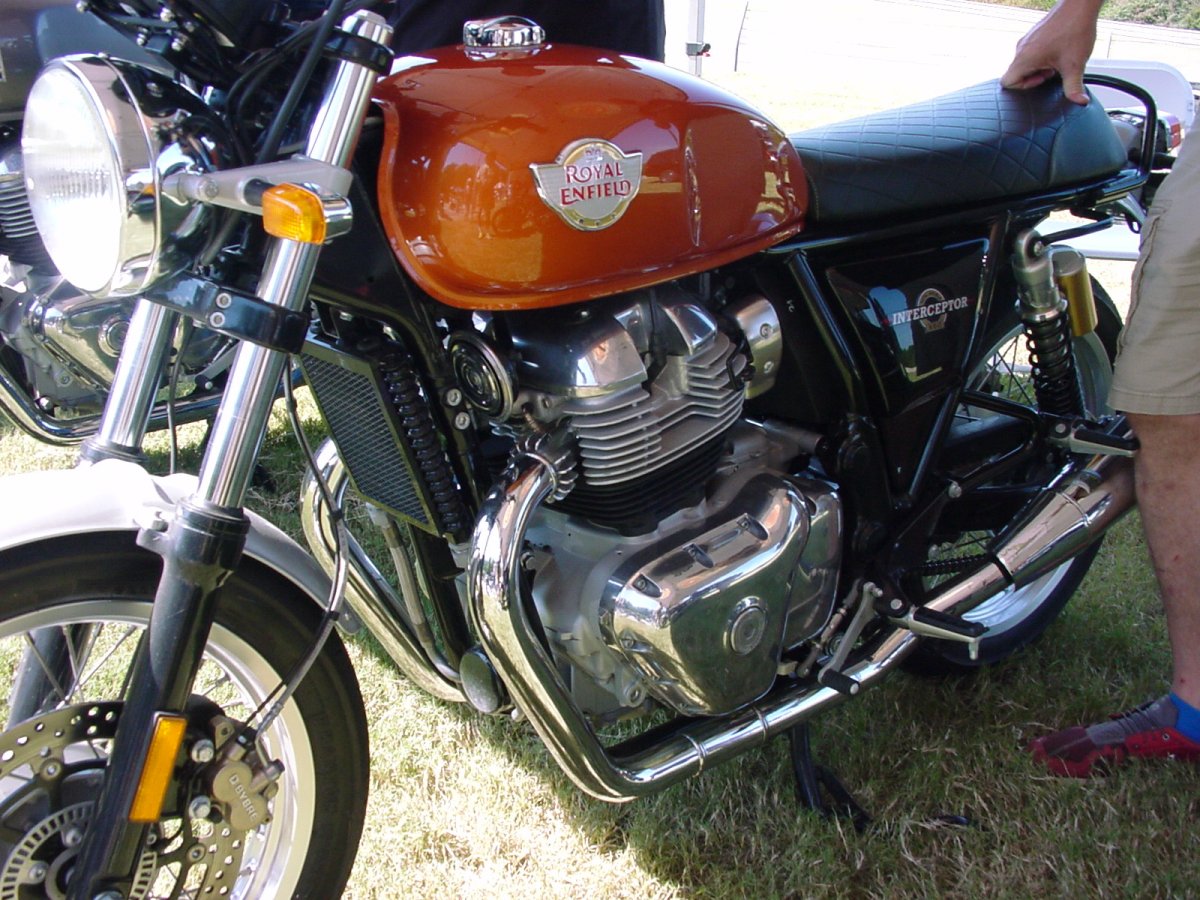 if I wasn't already motorcycle poor I would go for one of those....does the exhaust smell like curry?

There is CW bike show up in Dallas in early January. I expect there to be a RE booth there and I am going to check it out. Getting tired of bikes getting bigger and heavier while my right knee keeps hurting. I will post my thoughts and pictures when I get back.

I will correct myself about going to the show in Dallas. There is a list of vendors who are going to be there and RE isn't one of them. Rather take a beating than drive into downtown Dallas if there is no good reason to go.
John in Texas

If that is the price I'm pretty sure I'll have one in a year or so, I think they are a great looking bike .
sam

trident sam said:
If that is the price I'm pretty sure I'll have one in a year or so, I think they are a great looking bike .
sam
Click to expand...

Like you I am seriously looking at them. Need a button bike that is light. I need knee surgery and Don't want to mess up the work using a kick starter.
John in Texas

There's a RE dealer nearby. I went in and asked about the GT and the Interceptor. Was told that
the only way to get one from them would be to order it sight unseen. That sounds like they aren't
willing to risk buying one as a floor room model. I also asked about the Himalaya and was told
that they had sold 2 of them recently but didn't know when more would be available.
You must log in or register to reply here.
Share:
Facebook Reddit Pinterest Tumblr WhatsApp Email Share Link