Hello all-
And happy holidays! Can anyone help... I have just purchased another Mk3 for resto--I am missing the airbox. Does anyone have one or know where one can be obtained? Your help is appreciated. 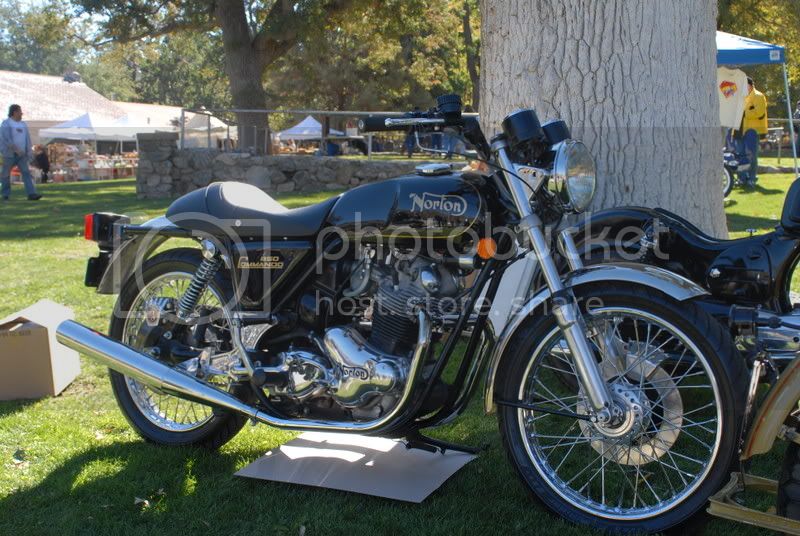 [/img][/url]Here is a teaser shot of my first Norton Restoration. Love these bikes!!
Thanks
JD

This airbox is not liked (why I don't know) so lots were removed and placed with K&N's, so there should be lots sitting on garage shelf's gathering dust, you do see them on ebay in the UK.

kommando said:
This airbox is not liked (why I don't know)
Click to expand...

Probably because they reduced performance? And they are rather bulky, making it awkward to remove and refit the carbs, the air filter elements were not generally available for quite some time I think, although they do appear to be available from ANIL again now.

Addition Oh, and the flimsy carb to airbox rubbers split rather frequently too.

kommando said:
so there should be lots sitting on garage shelf's gathering dust, you do see them on ebay in the UK.
Click to expand...

The going rate for these air boxes on UK eBay a couple of years ago was around £20-30GBP, and the last two that were sold on eBay recently I believe one (used) went for over £80.00. And the other (new) over £130.00 if I remember correctly?

The performance I am sure was more to do with the Black cap silencers, if you take out the rubber restrictors out of the 2 lower intake horns and fit pea shooter silencers I doubt there is a difference.

I was under the impression that the opposite was the case, that the black cap silencers didn't affect performance that much?

I believe the Mk3 air filter element itself added to the loss of power?

The element is a very course wire mesh with a unifilter type foam covering both sides, its a course foam which relies on the dirt being filtered on the oil coating the foam not the holes in the foam. You just need to oil it once as the breather routing keeps it topped up especially if you use dipstick markings as guide to the oil level and each time you clean it.

Yes I am aware, as I do have one of these Mk3 black box air filter units amongst my pile of spares although the filter foam disintegrated some while ago (no, sorry it's not for sale JD, as I own a Mk3 without the standard box fitted).

I'll be listing one on ebay early in the new year....as mine has the mikuni and K&N.Also the original Black cap silencers with the fittings.

kommando said:
The performance I am sure was more to do with the Black cap silencers, if you take out the rubber restrictors out of the 2 lower intake horns and fit pea shooter silencers I doubt there is a difference.
Click to expand...

Iagree. The compaints about lack of performance of the MK111 are due to the overly restrictive stock mufflers. One road test of the day noted that acceleration of the MK111 was down somewhat from earlier Commandos but the bike was extremely quiet. Unfortunately an extremely quiet bike usually (not always) means a gutless one.
With a freeflowing exhaust the MK111 makes lots of power and the top end (with twin carbs in place) is very decent.
Set up this way mine has a definite power advantage over my friend's 750 Roadster.

worntorn said:
The compaints about lack of performance of the MK111 are due to the overly restrictive stock mufflers.
Click to expand...

But there was no real change (engine wise) from the 1A or 2A models? Both of which had the black cap silencers and plastic airbox?


worntorn said:
With a freeflowing exhaust the MK111 makes lots of power and the top end (with twin carbs in place) is very decent.
Set up this way mine has a definite power advantage over my friend's 750 Roadster.
Click to expand...

Is that with the stock plastic airbox (no extra holes drilled?) and filter?

Yes, stock airbox, in fact stock bike other than Peashooters and Boyer ignition. Top speed is 115 by the speedo, which I thought was quite good given that I am fairly large and heavy. A small rider, flat on the tank might squeeze 120 out of it.

I hadn't realized the airbox was considered source of power loss, I will try the bike on my dyno hill with rubber hoses between the carbs and airbox removed. If there is any power gain it should show up in increased speed.

I'd be interested to hear the outcome of that, especially if by 'stock' your box still has the two 064839 rubber intake venturis still in position?

I think I'd want to go up a couple of main jet sizes before I tried it though?
And I would be inclined to leave the hoses connected, and run it with the filter and front plate removed, personally?

Yes I'll give it a try as you suggest.
The plate and airfilter probably are easier to deal with than the hoses. At present the box is fitted with two rubber inlet boots at bottom. I assume this is the stock setup. The openings in the boots are about an inch or an inch and a quarter in diameter.
Of interest, I just put the head back on after fixing the exhaust ports. I replaced the thick copper head gasket with a thin (.030) fire ring type.
The bike gained 3 MPH on the dyno hill. This may be due to the thinner gasket, or the old gasket may have been leaking a small amount of compression, although there was no sign of oil leakage with either gasket.

In any case, it is running great.

When I swapped to peashooters I had to up the main jets to 260 from the stock 220 for a MK2A for it to run well at high revs and full throttle, this matches the pre black air box figures so indicates the air flow matches too.

kommando said:
The performance I am sure was more to do with the Black cap silencers,
Click to expand...

However, that does seem to be at odds with the NOC Service Notes, that gives the following information written by Tim Stevens:

"...From a silencer point of view the long-cone-and-short-reverse-cone type of silencer is just the same as the shortish-cone- and-longish-reverse-cone type, but the cylindrical type with a black end is much quieter and *DOES NOT REDUCE THE POWER..".

There appears to be some mixed views amongst the NOC website info: