Anyone changed to Iridium plugs? Did you notice any improvements?

COMMANDO1954 said:
Anyone changed to Iridium plugs? Did you notice any improvements?
Click to expand...

I've thought about it but can'ty find any locally. Anyone have an NGK part number for a MKIII Commando?

I did, in a 73 850. They foul much less easily (I was running way too rich at the time, a problem since rectified).

I have since converted all of my bikes to iridium fine-wire plugs.

If you go to sparkplugs.com, they have a feature to identify the right plugs for your application.

I run them on all my bikes including a C15, no fouling issues and always the best chance of a spark if something else is past its best.

the spark plug debate, is much like synth vs. dino oil debate

use what you like best and go with it

that being said i use the platinum autolite ap-63's -

their cheap and can be found any auto parts store

since my bike starts in 1 kick 90% of the time , and doesn't foul plugs they work for me

I just fitted some NGK Platinium BP7EVX to my Norvil Commando with great results.
I had a blast to Brighton for the Rockers Reunion Ace Cafe Do this weekend & found the throttle response & pickup improved & first kick starting hot or cold.
Had a look at the plug colour & its perfect both sides so I would recommend these plugs.
Hursty

The Platinium type I am using NGK BP7EVX has no (R) in the part number so I don't believe this is a resistor type plug.
My bike is fitted with Boyer ignition so I can't see yours having a problem with the Platinium type plugs.
Give it a go I am sure you will be pleased with the result

fo4 those who insist on really throwing their $ away

I know that this is an old thread, but had to research the iridium vs copper plugs, since I had some plug fouling issues. I found this:

Copper Spark Plugs
Copper spark plugs are generally considered to have the best performance of any spark plug type. This is potentially different from what advertising companies suggest, but the other metals are, unfortunately, not as conductive in general as copper is. Platinum and iridium plugs are more likely to overheat, which causes damage to the plug components and can compromise the delivery of the spark to the engine block.

The entire article can be found at: https://www.carsdirect.com/car-repa...m-and-platinum-understand-for-top-performance

I love my antique Champion N4G plugs (no longer manufactured). Always were the best back in the day and haven't found anything better, including Iridiums.

If you have plug fouling issues go for Champion... once NGK foul they are finished 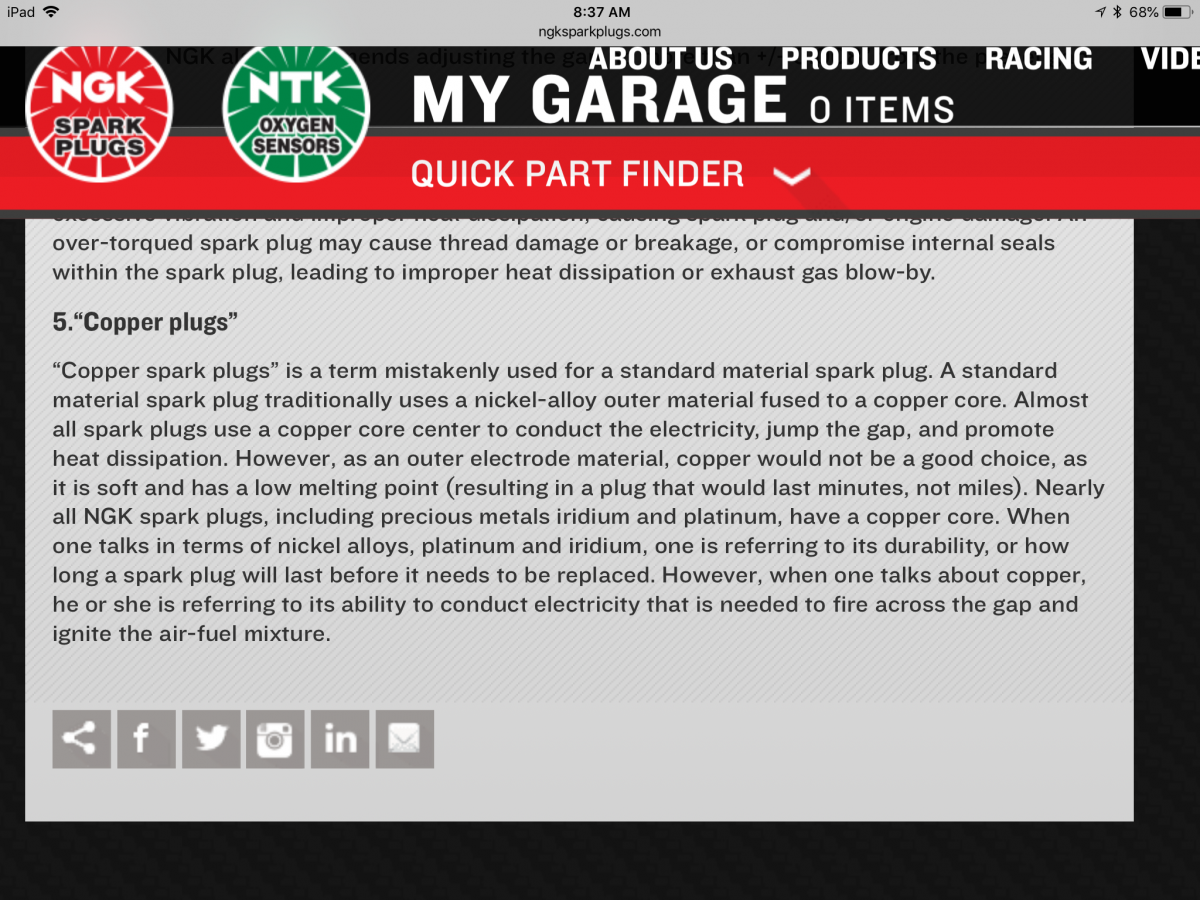 My understanding is most quality plugs all have a copper core. The difference is the tip material.

Danno said:
I love my antique Champion N4G plugs (no longer manufactured). Always were the best back in the day and haven't found anything better, including Iridiums.
Click to expand...

Gold Palladium wire electrode. As the wire slowly deteriorates. it forms a tiny gold mushroom on the tip. You can run 'em until the wire gets down to the insulator. Sadly no longer in production. Recently scored a stash of NOS.

I've been told they give the advantage of a hotter plug without the risks.

Not seen them in the UK used N4 as my plug of choice for ES2... In fact Champion are not easy to get hold of here . Shame because they will tolerate oily engines and over rich mixtures

Jeez, N4G....I had a handfull back in '78, given to me by the Champion rep at the Earls Court show where I had my race bike on display, yep they were good. That was where I first met Peter Williams.

He gave them to me after I told him that I had been given a box of Autolite race plugs and they had a 50% failure rate.

I also had some N64Ys, box full, used once for dyno runs in Cosworth DFVs at BRM in Bourne Lincs. The alternative to the N4Gs and N64Ys was the N57R, but there was a possiblility of fouling if used from cold.

But, like this thread, this is history, today I run Denso IW27s.

On a road bike NGK BP7ES is fine.

I run Iridiums, would not change back now. Beware there are a lot fakes out there, two branch members had been caught out. If you have both in your hands the fake is the considerably lighter plug. I swapped my plugs into a bike at a meet and it proved instantly it was the plugs and nothing else.

I was running the NGK iridium
but switched to the Denso version and found them slightly better regarding throttle response on
my 76 Mk3.
Cheers.
You must log in or register to reply here.
Share:
Facebook Reddit Pinterest Tumblr WhatsApp Email Link
Top