I have the original horn that came on my commando. I am not dead set on keeping it original and I would like a good loud horn. The original is sort of a heavy pig??? Should I replace it??? Any ideas where to get one and a good brand here in Fort Woprth Texas USA???

That Commando horn and where they hid it is a joke. An expert on them reckons the factory built the bike around the horn!

Its 12 Volt DC, go to an M'Cycle or Auto Parts shop and look for one that will fit somewhere on your bike without looking too...unsubtle shall we say?

The absolute superior alternative to the horn is a bloody good set of loud exhausts. Motorists are obliged to hear your Norton coming, admire it and stay out of the way!

Thanks for the good advise. I am looking for a good quality set of LOUD peashooters here in Fort Worth Texas USA--Got any suggestions????

I would like to try the Stebel horn, but I'm not sure where to mount it. Has anyone done this?

For British bike pipes - Try these guys - RPM in Dallas

I'm in Melbourne Australia where we get good sources but there are excellent suppliers in the States and Canada - i.e OldBritts check the web site.

Looking at the Stebel site I noticed the non-stock horn sold by Old Britts (http://www.oldbritts.com/13_032010.html) is identical to the Stebel TM80 horn aside from the labeling on the black plastic part of the horn. They're both made in Italy so it's probably just a name change somewhere along the production line.
Here's some shots of how I mounted mine:

The horn comes with two little sheetmetal "arms" with holes on either side which you can kinda see in the first two pics. One end of each mounts to the big stud in the center of the metal side of the horn and the other ends can go wherever you can find two other bolts to line them up with. It just so happens that when you use the oil filter mounting bolts on those two free ends, the horn ends up tucked nicely between the frame tube and oil filter. The only thing you need to watch is if there are large divots in the rear engine cradle where the center stand stops hit it when it's up, the center stand might come up far enough to contact the horn. I haven't had a problem with it though.
You'll also most likely have to fashion a wire or two to replace the stock horn cable harness since the original won't be long enough. It comes with a small cable to connect the ground spade to the center stud to ground it so theoretically you'd only have to run one wire, but I chose to run a second wire to use a ground connection on the harness itself.
If you really wanted to you could use the center stud to mount it in the stock location, but it's nice being able to take it off or check the connections without disassembling the whole bike...

I remember one of the motorcycle magazine reviews which said the horn "sounded like a bee under a bucket".

I think we (NV Engineering) tried a trumpet-style horn by Fiamm (Italian?)which was mounted to the top of the forks and pointed downwards. With the "Prince of Darkness" electrics providing the power, the horn drew enough current to melt things!

Thanks for the tip. I'm right in the middle of hanging one of those Fiamm blasters. Looks like it's relay time, huh? I did test it with alligator clips and wires directly to the battery. Pretty good blast, so I imagine it's drawing a fair amount of current.

Tweny-some years ago I mounted a pair of Fiamm conchshell horns up under the front of the tank, on the coil bracket: 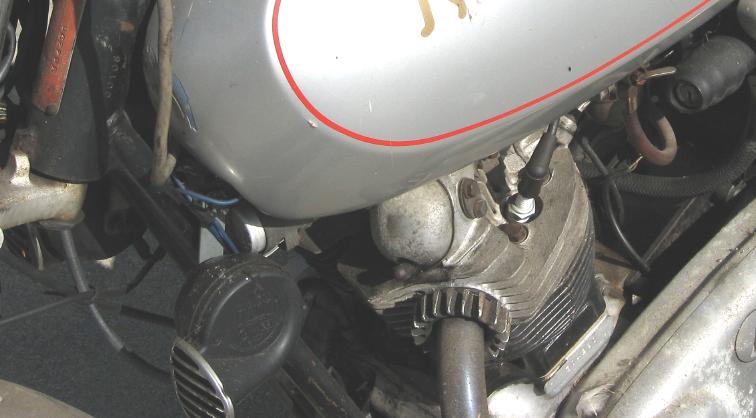 Here's another view with the tank removed 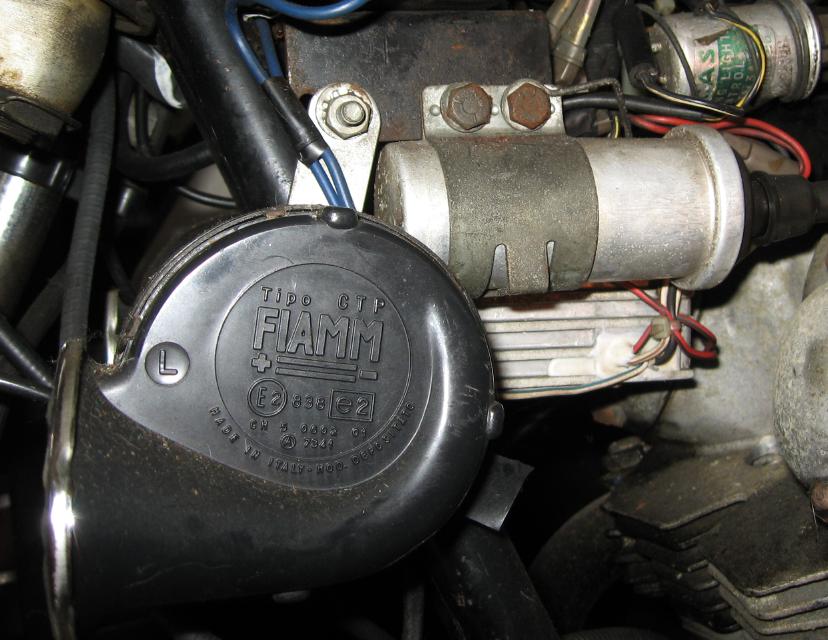 And yes, with Fiamm or Stebel horns, you do need to use a relay.

That Commando horn and where they hid it is a joke. An expert on them reckons the factory built the bike around the horn!

Mind you wouldnt change it - think it sounds rather cool 8) Nothing like a bee in a bucket :wink:

I mean ~ unless you are aiming for Concours.. go to a junk yard .. get a japanese horn, ( they are loud and reliable) and find a slot... and bolt it on!!!

I gave up on the Lucas horns. Had two of them fail. Going with Fiamm El Grande compact. 130 db @ 4". Its LOUD. It will mount in the original location with a modified bracket. Have to use a relay and a seperate fused circuit for it draws 5 amps.

I've had motorized vehicles for over fifty years and never did I experience a horn failure except with the Norton. I sometimes question my choice of motorcycles.

Santa damn well better have a new BMW K1200 GT in his sleigh for me.

I have dual Fiamms inside the fairing of my cafe racer pointed forward. Of course, using a relay to prevent melting the Lucas switches. These things are so loud that when a kid stepped off the curb in front of me he nearly jumped out of his skin when I hit the horn! I have a single Fiamm to mount on the Interstate and am torn on whether to mount it in the stock position, behind the foot rest plate like Scheffy G., or from the coil bracket.

My aesthetic side says the stock position is least intrusive, but my practical side says a horn should be mounted in front, pointing forward.

I just used a Harley Type horn, which is plenty loud. Cost me $20 and I mounted it in the standard position and did not have to use a relay. I usually end up using my middle finger anyway while riding along side the offending automobile. Much more effective than blasting the horn. :twisted:

No matter which horn you decide on using, I suggest moving it from the stock location. Aside from being barely audible, this location can lead to bigger issues.

Many years ago, while zipping down the road on my '72 Combat, the stock horn decided to go awol. The bolt that secured the horn vibrated loose. (imagine that?) :lol:

The horn dropped down and began to make a nasty sound when the chain promptly started chewing. No problem hearing the horn then!

Luckily, the chain guard did it's job. It kept the horn from lodging and possbly locking the rear wheel.