I'm finally getting to the point in the restoration where it's time to pick up an exhaust so i'm starting to shop around. Does anybody have any recomendations as to who has the best systems for a reasonable price? I usually get most of my stuff from Old Britts but it looks like they've been sold out of most of their systems for a while now (except the Viking systems which are waaaaay out of my price range).
Only reason i ask is because i've seen mentioned on the board a few times problems with fitting and having the kicker hit the pipes at the bottom of the stroke, and i'd like installation to be as much of a "plug and play" operation as possible. Plus the range of prices leads me to believe there are more than a few manufacturers. Thus far i've been checking out big-bore systems from RGM and CommandoSpecialties (eBay), but i'm open to any and all suggestions...

Stan carries Tom Epperson's stainless mufflers, which have a continuous taper. My set interfered with the kicker until I switched to a Mk3. Stan's a great guy and carries quality stuff, but if you don't want to deal with the kicker issue, you should avoid these mufflers.

I have a set of Toga mufflers that look really nice, but I haven't installed them yet. I have found that the belled end (Mk3 type) non crossover pipes are the easiest to fit as you have more adjustment room and stay tight without the rattling safety rings. However, the last set I bought discolored in a couple weeks. I believe Raber's may carry these. You might want to talk to Mike Partridge at Walridge Motors, he has been able to supply some hard to find pipes (P11, SS, low level Commando) and might have some suggestions.

If you are looking for cross-over type pipes, I suggest you find an original set and have them re-chromed as very few of the aftermarket type are acceptable in the aftermarket arena. I plan on re-chroming my belled end pipes as well.

I guess this information isn't really positive, but maybe will help avoid an expensive mistake.

You have two obvious choices, new, or used. Pre-1970 units have a tighter bend from the head and sit higher and closer to the frame rails. Dunstall pipes & "S" pipes are an option. After market, in general, are problematic.

Ron L said:
Stan carries Tom Epperson's stainless mufflers, which have a continuous taper. My set interfered with the kicker until I switched to a Mk3. Stan's a great guy and carries quality stuff, but if you don't want to deal with the kicker issue, you should avoid these mufflers.

I have a set of Toga mufflers that look really nice, but I haven't installed them yet. I have found that the belled end (Mk3 type) non crossover pipes are the easiest to fit as you have more adjustment room and stay tight without the rattling safety rings. However, the last set I bought discolored in a couple weeks.

I guess this information isn't really positive, but maybe will help avoid an expensive mistake.
Click to expand...

Are you speaking of Epco? Iw as about to order a set of their newer 1/2" bore SS silencers.

Yes, the shop is about 40 miles from here. Take a look at the muffler on the website and you will see that it tapers continuously to the clamp. This causes a slight interference with the kickstarter. I haven't seen their 1 1/2 inch set, but the 1 3/8 will hit the kicker. That being said, they are well made and I have had this set for at least 10 years.

Chinese chrome turns blue in one season, even with a well tuned engine. Some of the aftermarket headpipes are awful in their fit on the right side. Here's one I tried (Emgo):

And the obvious difference in bend comparing a factory right side 750 pipe to the Emgo:

I've heard that Commandos make more power with 1-3/8" than with 1-1/2" headpipes, tho I have no personal experience.

I do know that not all mufflers are created equal. I recently replaced a broken silencer on one side with a DomiRacer unit and the difference is noticeable both in exhaust note and performance. It's way too quiet and I've lost power across the whole power band.

Gonna install a pair of Wassel mufflers today and report back. These are the "seamless" design (no visible welds) and they're gorgeous. I hope they performm and sound as good as they look.

Speaking of EMGO headers and Wassell mufflers, that's what I'm currently running on my 750! I bought the headers from a sleazy ebay merchant who insisted they were "British made". I was naive enough at the time to believe him. They fit ok, but I am using a Mk3 kickstart lever. So far, in three seasons of use, they've turned yellow but not purple.

My Wassell mufflers look and sound great, but they've developed a rattle. It sounds like something has broken loose inside them.

The mufflers that came on the bike were an earlier version of EMGOs. Unlike the current ones, they were actually very quiet, too quiet for most people it seems. The chrome (what was left of it) was horrible. I've been thinking about sandblasting them and painting them flat black for the 850. Quiet pipes are nice for touring bikes, which is what I have in mind for it 8)

It seems all the pattern parts leave something to be desired...

Not all original 750 pipes are like the one you are holding. I believe these were supplied until sometime in 1972. They tend to fit closer to the frame. I know my '73 came with the straight fitted flanges, rather than the angled. (I still have them). The distance to the first bend and the amount of inward twist varies greatly in aftermarket pipes. Bob Schanz once told me that in a container of Triumph pipes from Wassell he was lucky to find two with the same bends, not to mention the container he received that was made with metric tubing. You couldn't get a muffler over the end of the pipe. Point is, British made doesn't mean it is going to fit any better.

I recently bought an EMGO pipe (to replace some road rash) and I don't like it at all. I can't seem to find the pipes I had before. The EMGO are not as nice, crude welds, bad fitting (had to file the weld bead inside the exhaust to fit the pipe into it) and one broke after only a couple of hours use. 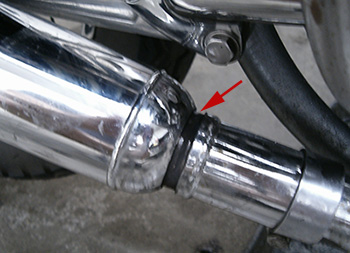 I am looking for another set of pipes for my 850 and don't want these. Any secret stash anywhere, or can anyone identify them? 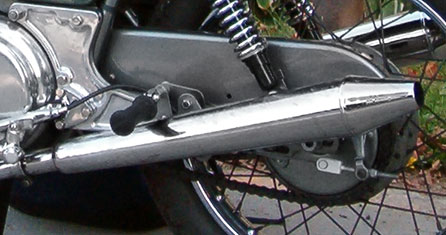 Note the one piece construction at the narrow end.

ps - sorry about the image quality. Do not adjust your set.

Your mystery muffs look a lot like my Wassells. Mine, like yours, are seamless at the small end but have a weld line at the reverse cone. A photo of the mounting area would help...

I seem to remember a Union Jack on the box flap, but everything seems to have one stuck somewhere when dealing with a Norton, if only to cover up the Made in China.
:lol:

Scheffy.G said:
Does anybody have any recomendations as to who has the best systems for a reasonable price?
Click to expand...

My personal recommendation would be a TOGA system, as they are good quality for the price and are made in the UK (Birmingham).

Scheffy.G said:
Thus far i've been checking out big-bore systems from RGM and CommandoSpecialties (eBay), but i'm open to any and all suggestions...
Click to expand...

Note that Commando Specialties now has a website up and running --I often see their parts selling on Ebay for higher than you can obtain them directly off their website. http://commandospecialties.com/

Also, Matt at Colorado Norton Works apparently has plans for a stainless exhaust system. I found this on their "Coming Soon" page of the website:

By the description - and as long as they are competitive price-wise - it may be a great way to go. But then one goes on to read: "This system will be available for delivery February-March, 2007," so there may be some serious delay in getting them. Either way, I'll definitely be calling him in a few weeks to obtain the status (and price).

I just put on a Wassell system that I got from Commando Specialties (prices have since increased somewhat). They sell the headpipes and the mufflers separately. Quality and fit are good.

I got a chance to compare to their lower-quality system as they initially sent those mufflers by mistake - they were very quick to apologize and rectify the error. The Wassells have no weld-seams and overall look/feel is much better.

Sound is improved over the stock system, although this may in part be due to my having replaced the stock 850 system (with balance pipe) with
a 750-style system without balance pipe. Got 750-style exhaust nuts too (much deeper threads) and that's another worthwhile change IMHO.

Thanks for all the recommendations/tips guys. Ended up getting the 1.5" big bore system from Commando Specialties - looks like a beautiful system on the ad so we'll see what it looks like in person.
For mounting I have the MKIII-design exhaust nuts - I was under the impression these were an improvement over the old versions? Thought I also read somewhere that the MKIII nut designs don't require the lock tabs as well - can someone confirm this? It was a while ago so it's possible i'm just making it up...

The exhaust nuts are the same for all 850's. The pipes on a Mk3 have a belled end that requires a matching insert for the head and a beveled collet for inside the nut. These allow some rotation and alignment and will hold secure when tightened. The '73-'74 850's used the standard flanged pipe with the crush ring and square collets inside the nut. These square collets allow the use of these nuts with either cross-over or non-crossover pipes. You cannot use the 750 style nuts with cross-over pipes.

If the Commando Specialties pipes are belled end, you will need the Mk3 collets and inserts.