Narrow slippery tires and open faced helmet date the photo (early honda 4). But look at the lean angle he's pulling off with his knees tucked in and nearly dragging the pipes. Sorry he's not on a Norton but he was still a hero to many.

Buggsy…….I recollect a guy telling me he 'done seen' Mann change a flattrack tire with his bare hands

I read he once cut the cast off a broken arm or leg and went out and made the Main.

And to settle the question of who drug a knee first, here's John Surtees on a Vincent. 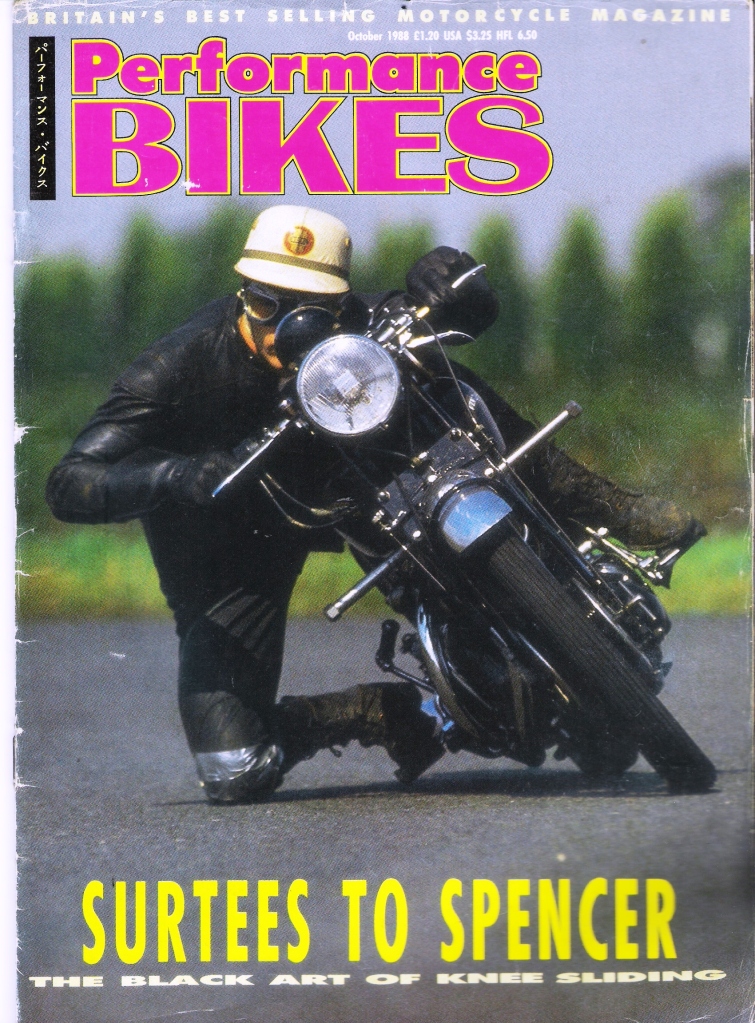 That article is 1988
I know for sure we were dragging our knees at Willow springs and Laguna Seca around 1984. Leathers didn't have knee pads then. I tied a piece of curved UHMW on each knee.

Looks like John is using a crash bar cross piece on his Vincent to minimize damage if he loses it.

This is how they do it now:

Let's not forget a certain Mr. Hailwood on arguably the most amazing motorcycle ever built IMHO -
Hondas RC 166

The pic looks older than that.

Barry Sheene is said to be the first as far as knee pucks etc and advertising brands on his leathers.

An article by Revzilla says KR was the first to have knee pucks and he claimed to have copied the style from Jarno Saarinen. Of course, KR and Sheene were bitter rivals and possibly Roberts would never admit to copying anything from Bazza, even to this day.

I saw Dick Mann race a BSA 500 single at a big autocross at Road Atlanta in the early 70's. He was fairly old on an outdated bike, but he was impressive and did pretty well.
I'll never forget the sound of that thumper contrasting all the 2 stokes.
Jaydee

I remember an early printed discussion about hanging out your knee. It was claimed that not only did it help determine and stabilize but throwing the knee out helped brake and begin your turn.

The steering geometry affects the angle of lean. It is possible to get the bike to turn with less lean, if it oversteers when you gas it in corners. When you use extreme angles of lean, you become much more tyre dependent. The caster effect of motorcycle handling is not really predictable. What you think might work, is not necessarily the case and changing it can be dangerous. Some guys push the fork yokes down the staunchions to get the bike to turn quicker. But when you brake, that also reduces the rake and makes the bike more stable.

Over the years, power went up. That forced chassis designers to use wider wheels and tires and that, in turn, meant quicker front end geometry to offset the fact that the tire contact patches were moving away from the center line of the bike. Another consequence of rising power was a transfer of weight from the rear wheel and toward the front wheel.

When I switch from my Commando to my CBR1000RR, the Honda understeers. At an easy pace, I have to dip a shoulder to get it to turn in, bite, and not push. Pick up the pace and have to hang off, moderately. Riding the Honda, I miss the rock solid feel of the Commando's front wheel but the Honda, with less weight on the rear wheel (and wider tire), can lay down far far more power before drifting/spinning out.

I've always heard that " King" Kenny Roberts was the first to change turning posture in racing from sitting straight with the bike to counterbalancing to the inside on fast curves. This was back when he was racing the monstrous two stroke 750 Yamaha.
As speed is increased on any given radius turn, the motorcycle (in order to maintain that radius ) lean angle must increase. Likewise, at a given speed on any curve with a decreasing radius, the motorcycle ( in order to maintain that speed) lean angle must increase. With motorcycle, pavement, temperature and tire characteristics being the limiting factors regarding how far the motorcycle can lean, the only way to increase speed and go faster through the curve is to keep the motorcycle more upright and transfer the riders weight to the inside, thereby reducing the lean angle limitations of the motorcycle. This is a great skill to use on the street as well as the track, even though street speeds might not be as high. Keeping the motorcycle upright on an off camber turn or anytime you're dragging foot pegs, pipes, luggage or even on slippery roads where you don't necessarily feel comfortable leaning the full motorcycle weight you can change your posture. The only other option to reduce the lean angle is to reduce speed and racers don't like to reduce speed. Those rascals are still coming up with ways to go faster.
Likewise on slow turns that are fairly tight adjust your posture so that your weight is to the outside of the turn (counter balancing to the outside) and the motorcycle lean is greater than the rider.
I've never had to lean as much as Fabio Quarteraro in the above picture. If you see me leaning that far, you'll know I've crashed again. Most street riding situations only require a change of your upper body posture to the outside or inside of a turn to counter balance or counter weight the motorcycle. You shouldn't need to drag your knees or elbows on the street.
This stuff really works. I never believe all that I'm told and I don't expect you to either. I go out and practice and experiment with a skill or a (supposed) fact until I know what's true. Every day on the motorcycle is practice day. I've been riding for fifty three years, but when someone asks" When did you learn how to ride?" I guess I'm still learning. I certainly don't want to come across as some kind of "know it all" but I taught motorcycle rider education for thirty years and I think I've got plenty of riding experience. I evaluate the people I see riding and I evaluate myself. I've seen a lot of riders with three months riding experience thirty times in a row. They've never improved and are very proud to say "I learned how to ride thirty years ago". They usually don't welcome any advice.
Just passing on some help, I hope.
Charlie.

acotrel said:
But when you brake, that also reduces the rake and makes the bike more stable.
Click to expand...

I think you have it wrong again, when you use the front brake, the forks compress which reduces both the rake and trail. This makes the bike momentarily "less stable". The bike may turn in faster, but it is NOT inherently more stable....

JS
the photo of Dick Mann only tells part of the story. You yourself will probably recall the quality of the tyres back then, compared to those currently used by MotoGP teams. Had Dick Mann had tyres like the present day ones, he would have cornered with the present day best. Put tyres with that old rubber on the modern bikes and see just how far the likes of Rossi and the others can lean over before the tyres let go.

Re comments on how to ride and similar, I doubt many riders conform to any kind of pattern with their riding techniques. Certainly during my years being involved with road racing , and working with champions, both World and National, I can say they were the most different in everything they did relative to their racing, all did it their own way.
Regarding leaning off and dragging knees on the ground, years ago a Rhodesian rider, Ray Amm, when racing works Nortons, would often move his body on top of the machine in a corner, rather than going in the same direction as the angle of bank. He got results, the method worked for him, but he was the only rider I ever saw use this particular technique.

Supermoto riders are taught to stay upright and lean the machine over, which seems counterintuitive with MotoGP guys dragging elbows. Makes for an interesting mix of cornering styles with mixed classes such as in AHRMA racing.

When KR rode the TZ750 flat tracker replica at Indy a few years ago, his first comment afterwards was, "I wish we had these tires back in '75" (when he won the Indy Mile in a dramatic, come-from-behind, last-lap charge)

So while it may seem like all the geometric and hp differences make modern bikes so much faster, it's actually been advances in tire technology that allowed those changes to be utilized.

Roberts copied Sheene who copied his brother in law, Paul smart. As for john Surtees... no one else will ever win the f1 world title and the premier class motor cycle title again. The man should have been knighted.

o0norton0o said:
I think you have it wrong again, when you use the front brake, the forks compress which reduces both the rake and trail. This makes the bike momentarily "less stable". The bike may turn in faster, but it is NOT inherently more stable....
Click to expand...

The next time you are in a road race, ease your front brake on in the middle of a corner and see where you go. When the front goes down, you run wide. When you brake, the bike becomes more stable otherwise you would crash - when you accelerate in a corner, the rear goes down and the front comes up and the bike either runs wide (understeers) or it tightens it's line (oversteers). The way my bike is set up, it simply flashes straight into corners and when you are halfway around, get straight back onto the gas - the bike does the rest. All I do is operate the brakes, gears and throttle. I don't need to consciously steer the bike. All I do is put my head where I want to go and it is there. If I reverse-steered going into a corner, I would crash.
You must log in or register to reply here.
Share:
Facebook Reddit Pinterest Tumblr WhatsApp Email Link