Build a strong motor with the stock cast iron crank with no rev limiter.
Yup, that's the counter weight under the bike.
It exploded apart and made a fast exit. 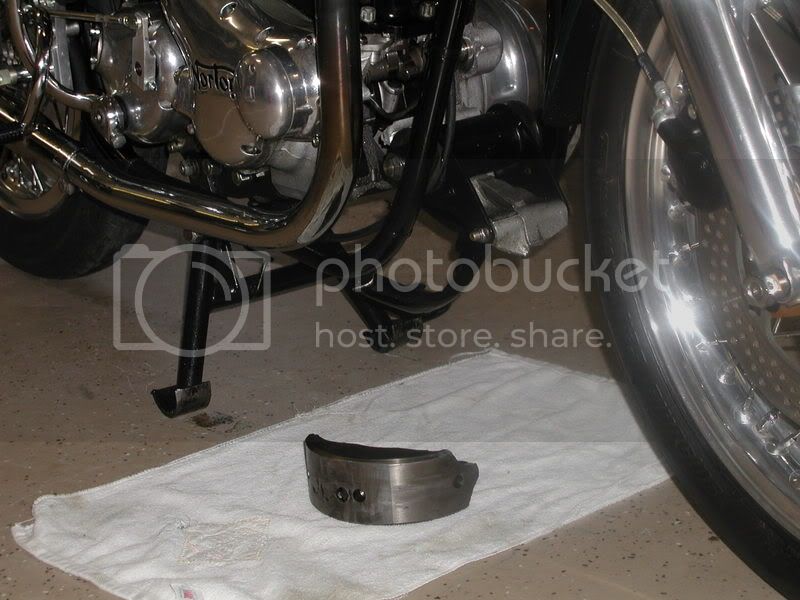 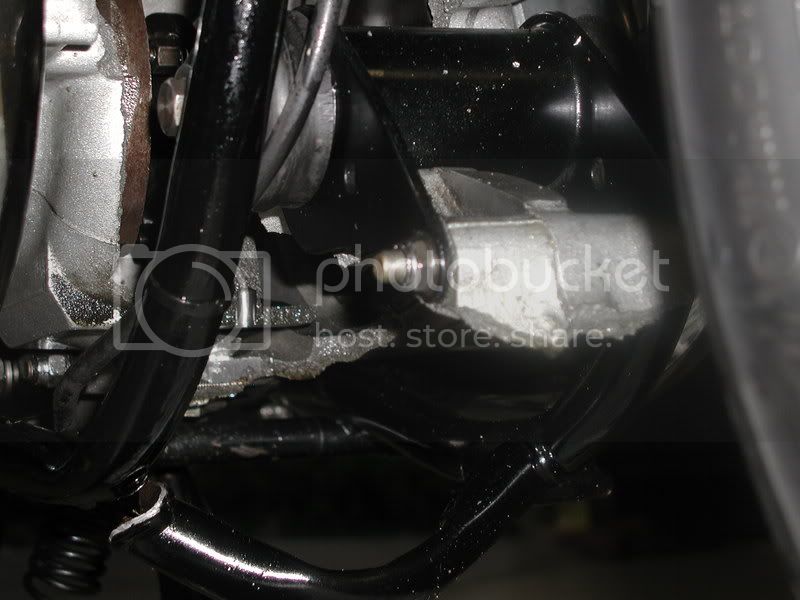 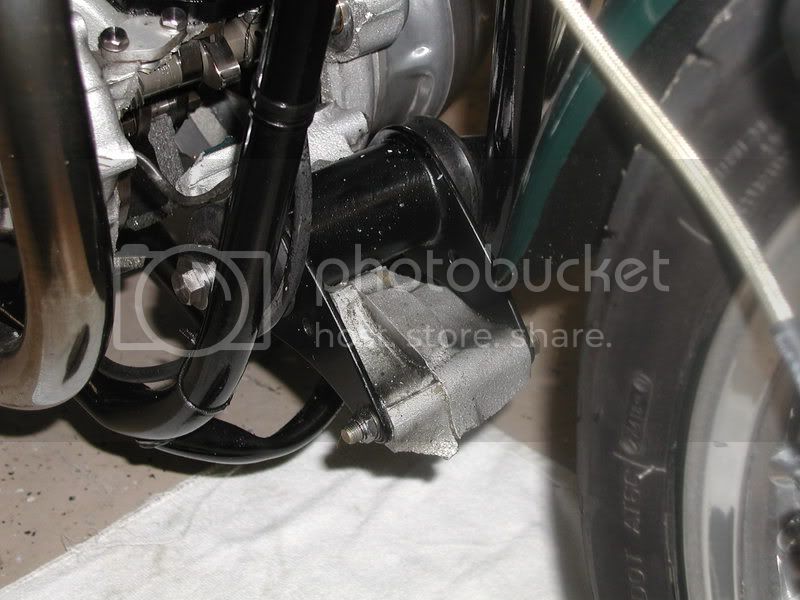 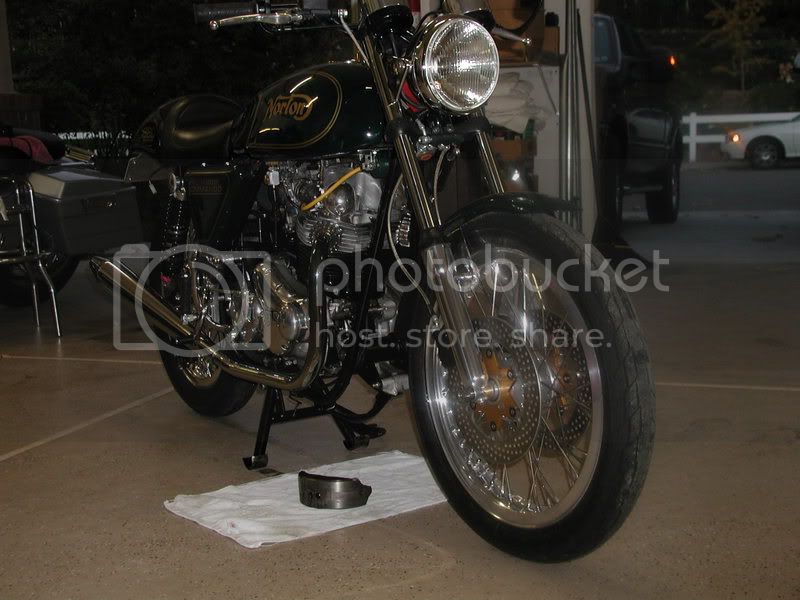 Is that a Kenny Dreer 880?? What kind of R's were you turning when it decided to part company with the crank?

So sorry to see that Michael. I know the feeling only too well. Get back on the road soon...Billet crank on the shopping list?

Aside from the obvious fact that you must have a guardian angel, to have not gotten badly hurt by this occurance.......what actually caused such a thing to happen?
I take it the crank was stock...is there some other type of crank you should have used? How fast were you turning the motor when this occured and by "strong"...what do you mean? Is this something that happens more often to stock motors, or is this only something that can happen when a person has built the motor to well exceed the standard output and should have done all the "improvements" and not just some of them?

My questions are sort of directed towards the Dunstall motor I will soon be trying to get running....it appears to have a standard head...but I was planning to do a few of the improvements, as long as it was apart anyway.....so what have I got to really take into account...in doing this motor, to avoid what has unfortunately has happened to yours?

Any info apprieciated...and best wishes to a speedy recovery... :wink:

I've never seen a Commando Flywheel do that before, usually they break on the journals.

Did the crack start across the narrow part of the web where the (extra ?) balancing hole was made ?

I'd be fascinated to know at what rpm it let go. Do you have an electronic tacho ?

Bummer!
Sorry to see such a mess. Just glad no one was hurt. Machines heal faster.
Sincere condolences.

79x100 said:
Did the crack start across the narrow part of the web where the (extra ?) balancing hole was made ?
Click to expand...

I thought the same.

What an absolute shame Michael :cry: that's a really special looking bike, it hurts when a magnificent piece of machinery ends up in that state, if you picked up the counterweight off the floor and looked at the bike from a normal standing position you wouldn't know there was anything wrong.

Is it too late to ask how the front end mod worked for ya? I know a few people who use a nice big round of 6150 steel in place of the lump on the floor. This is the second abject lesson as to why. It's just a little scary to think that that piece could have made the fast exit anywhere through the 360 degrees.
The first lesson was a racer vintage racing took out the cam and broke the transmission housing. looks like you still have both although you will be checking the cam now? I am thinking 7000 on the rev limiter for the next beast. At least we all know you have fun on your bike now.

Yup, it's the Dreer 880. I was little busy landing the front wheel to notice what the revs were, I guess they were a bunch.
I was returning from a Vintage Bike gathering along with a buddy on his very choice CBX, I decided to show him how the English do it American style, and pulled a massive rolling wheelie. I obviously overreved it trying to land it softly. It let loose just as I was touching down reaching for second gear.
I can assure you when it let loose my bottom side sucked the seat all the way up to my throat.

My buddy, an ex road racer, saw the whole thing said it was the coolest, most violent bike motor explosion he had ever seen, and yet it was basically a non issue for me as I just coasted to a stop. For which I am very grateful.

It happened several weeks ago and for days I was upset and annoyed that it happened. I was pointing fingers everywhere, then I read this.

"Consists of a NEW flywheel made from high tensile steel (the standard cast iron flywheel can be explosive, resulting in total engine destruction)."
That's from Steve Maney's web site. I am still annoyed, but at least I understand a little more.

I am so annoyed I don't even know what I want to do. I may sell it as is, maybe not. The thing is there were only 43 of these ever built.
It is the talk were ever it goes.

In the mean time I bought another little toy to occupy myself with.

I questioned whether to share this experience or not but I figured maybe it will help someone out.
These are old motorcycles that have limitations and need to be treated accordingly.

Micheal, I am new to this forum, and regret that my first post is to this sad thread, but when I saw those pictures I felt I had to write to offer my condolences. I know a little about how you must feel, having once thrown a rod through the case in my 1969 T-120.

This is the second time I have seen a Commando in this condition, with the case blown out, and half the crank laying on the ground. The first time was several years ago, on our annual British bike ride. He was on a georgeous, just completed, Combat in Featherbed cafe. I was on my near stock '71 Roadster. He was about 5 bike lengths in front of me. I could clearly hear his engine. He had just changed up to third,accelerating in the fat part of the torque band (not close to an overrev),when it happened. I heard it blow, and had to swerve to miss his engine bits, and oil slick. I think I was more shaken than he, at least until he saw what had happened to his engine!

I waited with him until the sweep truck came by to pick him up, and I can tell you, looking at that engine made me queasy, in the way that some people get queasy when they see blood.So much so that I nearly put my own Commando on that sweep truck. It's a good thing I didn't, because by the end of the day, that truck was full of broken BSAs, Triumphs, and even one Vincent! My Norton,of course made the rest of the trip with nary a glitch.

I never saw him again, but I did see the bike,fully repaired, at a show a few years later. I coudn't connect with the owner though, so was never able to find out why the crank broke. I do know it was not spinning excessive rpm when it happened. A faulty casting maybe?
Sorry about your bike, but please don't sell it. You will regret it later.
Repair it, and keep it forever. It will be a lot cheaper than trying to buy another one 10 or 15 years from now!

Michael,Sincerest commiserations on your misfortune,I'm really glad that you were not hurt -- bodily!, however, the last line of your last posting tells the story, old machinery needs to be treated with care and respect,I hope that you will go ahead and rebuild to enjoy many years of NORTON pleasure.Ride safely. James

I'm so sorry to read about your big bang. I'd like to encourage you to rebuild it. Would be a shame to sell off such a rare and unique bike.

In the meantime, I hope you still have one of the other Commandos to ride!

Thanks everyone for your kind words.
I am not the first nor the last too blow a crank, it's just painful.

To answer some of your questions, I don't know if I rebuild if I'll go with a stock crank, billet crank or a Steve Maney crank.
It blew apart at the bolts.
Yes, I have an electronic tach.

I was upset that it took out the lower frame member, but I guess that is better than exiting out the rear taking the gear box and locking up the drive train!!

As far as another Commando to ride, not right now. I have two 750 projects. The Dreer WAS the rider.

Still contemplating what to do.

Here's a few more shots of the crank. 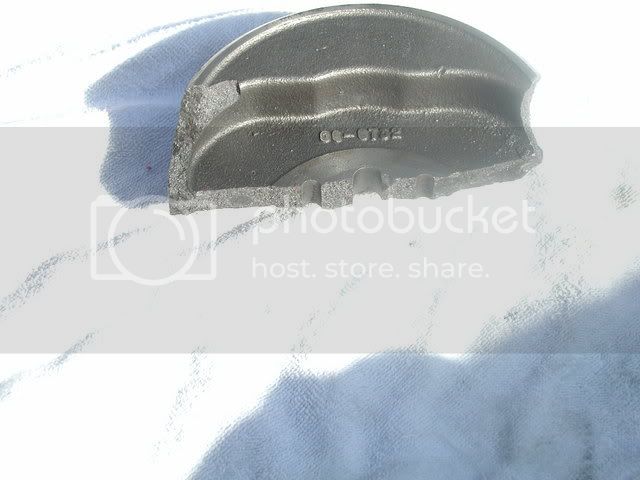 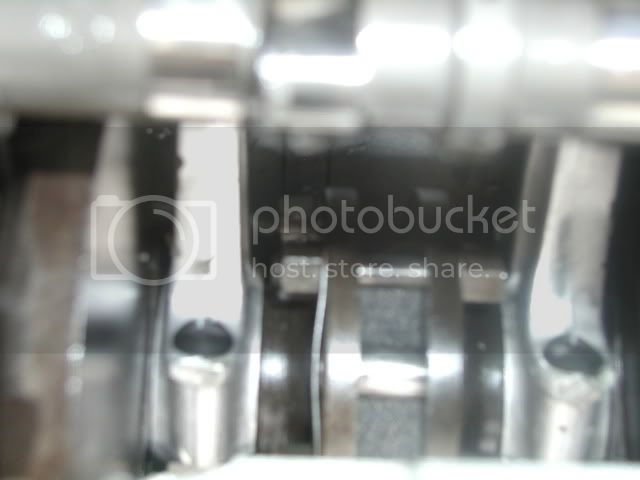 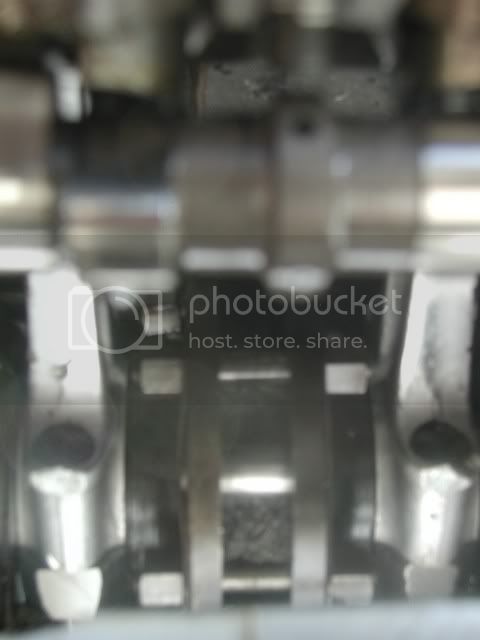 Isn't that something the way the lower crossover tube took that hit? Judging by that bit, I'll bet the left and right tubes are ever-so-slightly tweaked inward as well. No biggie, but look for cracked paint/powdercoat at the nearest joints.

Yuck. What a bloddy mess. Hey, it happens, and it's still fun; just that it's EXPENSIVE fun.

You sound like you have the right attitude; it also shows in that you didn't take your favorite ball-peen hammer to the tank and engine covers to vent your frustration (I've seen that before, it ain't pretty).

Guys this bike was sold about ten months ago on eBay as is. Michael did a good job describing it's condition and it's on to the new owner. Maybe Michael knows if it was made to run again.

It looks like one of the prototypes. We were testing on a high speed circuit at the Motor Industries Research Association facility. The first Commandos had a 1/4" final drive chain. At a continuous 100 mph for a full tank of gas, the chain needed about 1/3 of the available adjustment.

The inevitable "one more go" occurred without an adjustment. At about 105 mph on the banked part of the track, the split link failed. Throttle wide open, of course, and no resistance on the sprocket. The tachometer needle was bent at the end where it hit the stop.

As best we could figure, the rpm got high enough to allow valve float, one valve hit a piston and cracked it. The piston jammed in the bore, so the wrist-pin ripped through it on the down stroke, then the bent end of the connecting rod punched out the side of the crankcase. Instant boat anchor!

Finally we went to a 3/8 chain, which the Atlas had used for years.