We actually have herds of Javalina that move back and forth across our backyard regularly. I've emptied out my Colt Woodsman (.22LR) on them many times without so much as a squeal; I don't think a rivet stem via blowgun will even interest them... 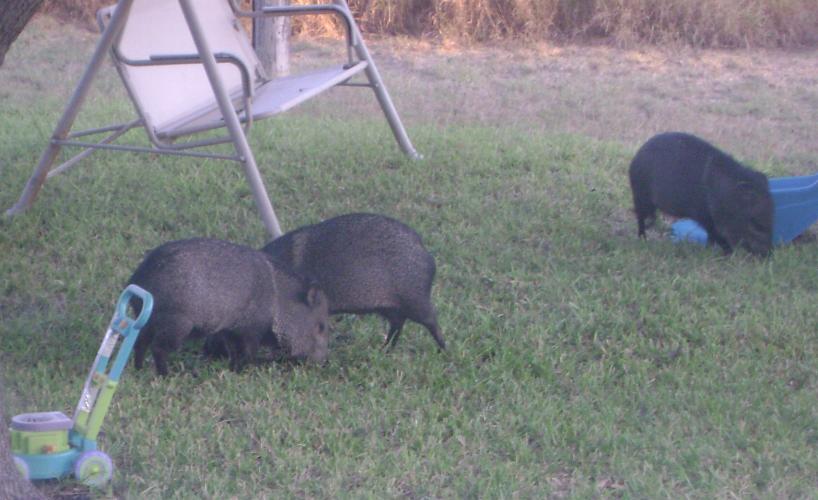 However, a well placed arrow... 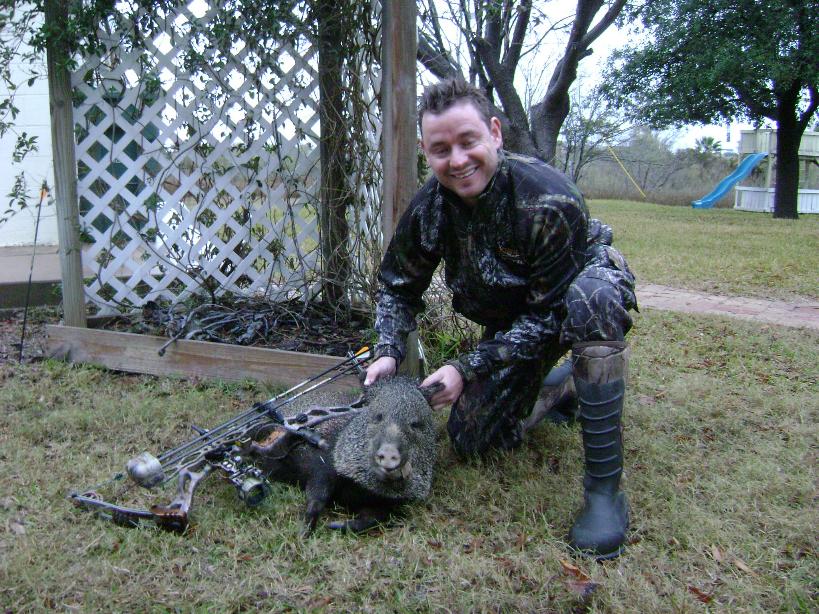 That Javalina is laying right where Joseph and one of the wise men are standing at the moment...

grandpaul said:
We actually have herds of Javalina that move back and forth across our backyard regularly. I've emptied out my Colt Woodsman (.22LR) on them many times without so much as a squeal; I don't think a rivet stem via blowgun will even interest them...

That Javalina is laying right where Joseph and one of the wise men are standing at the moment...
Click to expand...

Bacon sandwiches in the morning for breakfast then?

Bernhard said:
Bacon sandwiches in the morning for breakfast then?
Click to expand...

The hunter was a friend of a friend who only wanted the hide for mounting. I got all the meat, we ate half and gave away half. Around here, we eat EVERYTHING we kill or catch.

How far did your friend have to walk before the pig dropped ? Here in Nova Scotia other than folks in our one City .... rural dwellers learn early to own a deep freeze and a cold room in basement to store what we can shoot, trap , catch and grow etc. , been like this since the Ship Hector .... once coal & cod were no longer king , had to find alternate ways to survive .... I guess that pig would travel quite a distance after being hit given their speed , eh ....

Obviously, in reading this thread anyone, even Slick, LOL, can see there are many uses for pop rivet stems. Therefore, I will keep saving them. Ya ever know, they might be useful someday

Craig said:
How far did your friend have to walk before the pig dropped ? .... I guess that pig would travel quite a distance after being hit given their speed , eh ....
Click to expand...

Not at all. He let out a mighty squeal, flopped around a bit, and expired on the spot. Left a puddle of blood at the base of our kids' slide.

The guy was using those expanding arrowheads that flare out razors on impact. Sliced the heart, lungs, and spine all in one blow. Perfect shot.

Just thought of another good use for pop rivet stems:

Take a medium-large Javalina ham, season lightly in a roasting pan, then use pop rivet stems to pin cherries all over it. Encircle each cherry with a pineapple slice. Also poke about 2 dozen cloves in all the empty spaces left over. Make a glaze with brown sugar and butter, smear liberally over the entire ham. Bake at 325F for 20 minutes per pound (basting every 20 minutes). About 3-1/2 - 4 hours.

Extract all pop rivet stems before serving, the garnishings will stay in place.

You will thank me for this one.

[ordinary ham from your grocer will work in place of the Javalina ham]
Last edited: Dec 30, 2018

I will be passing that recipe over to the kitchen boss today , thanks , looking forward to a taste ....

Craig said:
I will be passing that recipe over to the kitchen boss today , thanks , looking forward to a taste ....
Click to expand...

If you need any rivet stems, there are several sources...

GrandPaul, if you had come up with that use for pop rivet stems before I closed this contest, you would be the proud owner of two boxes of pop rivets in vintage boxes!

Perhaps eskasteve will share with you out of pity.

It's ok, I'm all set for rivets in all sizes.

eskasteve said:
I own a professional grade rivet tool and it's contributed to many rivet failures. The cost of that bad boy makes it even worse. I think that it laughs at me every time that I drag it out of the tool box.
Click to expand...

I use my trusty old Craftsman. I have a newer one, but the old one works better. 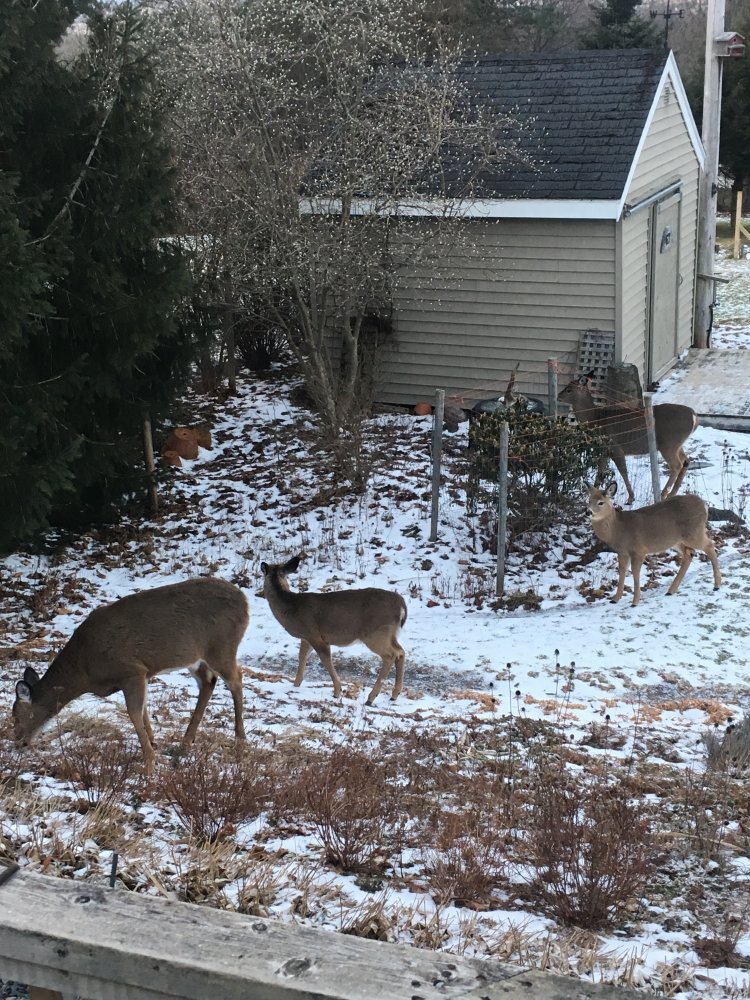 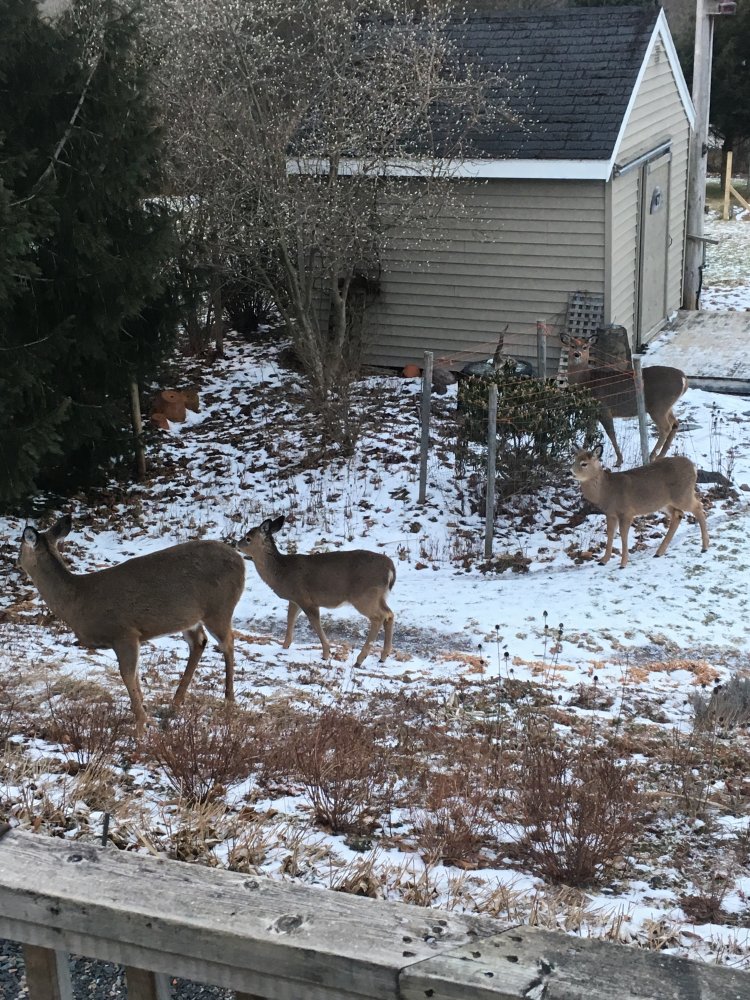 Here are some future meals , though Doe harvest is limited here ... photo taken 5 minutes ago ... damn deer eating all our greenery even when it brown ....
Craig

Craig said:
...deer eating all our greenery even when it brown ....
Click to expand...

Yep, around here they are like giant rats, leaving poop all over the yard. We finally fenced it in enough so the kids no longer need to scrape their shoes off before coming inside the house.

My property has a chunk of the oldest road in the county. It started as a deer path, then the natives chased the deer and then the white people chased the natives up and down this road that runs along a creek to the river. I figure the deer were here first and the rest of us are johnny-come-latelies. My dogs pretty well keep them away from the house and yard, but I had a speckled fawn nearly run into the garage when we first moved in.

Thousands of deer are taken legally every season and probably thousands more by poachers, so overpopulation only becomes an issue in the areas when city folks have moved in and don't care for or allow hunting. Like the folks on the Gulf who live with hurricanes, the Californians who live where there are mudslides, wildfires and earthquakes, it's just a part of the deal. If I didn't love it here, I'd move.

Of course, what do I know? I save pop rivet stems.

Danno said:
Of course, what do I know? I save pop rivet stems.
Click to expand...

You save 'em and I enter a contest to win some. Maybe we are disturbed as my wife has alluded to.

Not the first time I've been accused of that.

I'm in danger of being moved against my will; my wyfe wants to buy a house with brick walls and a concrete foundation, and I don't blame her.

As this is the "General Classic Motorcycle Discussion" section, I think I can turn this thread around. IF we move, I'm going to have to move a bunch of classic motorcycles...

Not to disrespect your wife but she seems to be somewhat of an elitist as is my wife. My wife even demands that precious garage space is to be used to park her car instead of more motorcycles. How selfish is that?
(the word motorcycle is used in this post)
You must log in or register to reply here.
Share:
Facebook Reddit Pinterest Tumblr WhatsApp Email Link
Top