contours said:
What is your weight, BikerBore? Just wondering if I could benefit from some adjustments.
Click to expand...

If you want to trying my settings they're:

Given how hard the rear springs are I'd recommended removing all the preload (no rings showing).

Front preload I cannot remember at there was quite a bit off adding a turn or three then taking it away until got sag right. I'd say you'd want to set your own sag anyway.

And you found the stock settings too hard or too soft?

contours said:
And you found the stock settings too hard or too soft?
Click to expand...

Oh - that is a good reference then. I am around 170 LBs and find the suspension a bit bouncy. Makes sense now.

Mean while......!! back in the civilized world we use Kilograms as defined by International Bureau of Weights.

Bluey72e said:
Mean while......!! back in the civilized world we use Kilograms as defined by International Bureau of Weights.

It's a British bike so I used a British weight scale

Missing the days when we had 240 pennies to the pound (£)

how about starting a new thread, like 6000 miles one, where those who have found a good set of settings can list them along with their weight. Need to have headings for click direction etc!

Bluey72e said:
I haven't found any Imperial bolts on the 961 yet (about to get spammed by the nerds pointing them all out)

I've been riding a bit now with the softer rear springs, and I'm really happy with them. The rear no longer bounces me out of the seat on bumps, and I can now get the sag in the right range with reasonable pre-load adjustment. Rear pre-load is now at 2 rings showing, compression is 4 clicks out (minimum limit), and rebound is 20 clicks out. The front is on minimum pre-load, with 16 clicks out on compression and 18 on rebound. I'm still experimenting, but these settings are working pretty well.

I suspect a slightly softer front spring would be better, but not sure it's worth the effort. I have to keep reminding myself that this isn't a race bike, and it should be set up for "brisk" street riding, not the race track. Race tracks are generally much smoother than some of the bumpier roads I ride.

Good discussion. The information in the factory service manual is also pretty detailed. I'd suggest starting with the values in the service manual. I've found it easier to start working with the front forks first, and once they are sorted to move on to the rear. I'd also suggest when making compression and rebound changes in the forks, make a significant change, like 4 or 5 clicks to see what effect it has. That should tell you which direction to go. Then you can refine it in smaller increments. It's pretty hard to tell any difference in a one click change. It also seems simpler to me to work with the front compression adjustment first. I reduce it in stages until it gets close to bottoming on extreme braking, and then add just a little back in to have some margin. You can then work on the rebound setting. I keep backing it out until the front end starts to feel a little unstable under hard cornering. On a race bike, that might be where you want it, but on a street bike I crank in just enough rebound to make it feel solid in the corners. At the rear, I also work on compression first, mostly putting in enough that the bike doesn't squat too much under hard acceleration, but not so much that it kicks me off the seat in the bumps. The Ohlins rear shocks only offer 4 clicks of total adjustment, so it's pretty easy to find the best setting. With the stock stiff springs, unless you're carrying a heavy load, you'll probably end up with 4 clicks out, the minimum amount of compression damping you can get. With a passenger and/or luggage, you might need more. To sort the rear rebound setting, I have a bumpy road I use for testing, and I mostly just play with settings until the bike feels like it is tracking the bumps as best it can. With too much rebound damping, the rear will pump down over a series of bumps, and feel really harsh. Might even feel it loosing traction as it bounces off the bumps. With too little rebound, the rear end feels like a pogo stick.

Optimizing suspension settings is really an iterative process. You start by getting the sag settings somewhere in the acceptable range, then work on damping adjustments. But you might later find yourself changing the preload settings for one reason or another (heavier loads, more or less squat or dive, or softer in the bumpy stuff, or more stable at high speed on smooth tracks, or?), and then you might have to revisit the damping settings to suit. There really isn't any "one size fits all" setting. Getting the fine adjustments right depends a lot on both how and where you ride. The right settings for a track day addict aren't likely to be the best for touring in the twisty mountain roads or freeway flying with a passenger. In the end, it comes down to what works for you.

Fortunately, on a street bike, you can play with the settings to your heart's content with no risk to life and limb unless you really push the limits. It gets a little more critical on a race track.

At least we don't have to worry about having both high speed and low speed damping settings to adjust, like the high end race (and some street) bikes have. I'm not sure I'd ever get that all sorted out. Actually, I'm not sure I really have it sorted out with what I have now. But it's kind of fun trying, and unlike engine mods, it doesn't cost anything.

Hi Ken
a query on the fork height adjustment - would raising the rear shocks via the bottom mount/lock nut have a similar handling effect?
Wary here of reducing clearance to the oil cooler, i have given that a good bash with the front guard on one occasion.
thanks
Iain.

raising the rear should have pretty much the same effect as lowering the front. In theory, it's a bit different because it also changes the swing arm droop angle, and hence the degree of squat and dive under acceleration and braking. But in real world street riding you will probably not notice any effect from that.

I had good luck with the oil cooler issue by shortening the hoses to it enough to pull it back parallel to the down tubes. So far no problems with fender interference, but I haven't tried it with stoppies yet. I've seen other solutions that include custom brackets to pull it in even further at the bottom.

Thanks, i certainly don't use all 80hp so definitely a real world street rider. Will have a play with the shocks at some point.
I was toying with getting a couple of elbows and cutting those into the lines to pull the cooler back, also "one day".
If you do test it with stoppies don't forget to post photo's

ntst8 said:
I was toying with getting a couple of elbows and cutting those into the lines to pull the cooler back, also "one day".
Click to expand...

On mine, simply shortening, re routing, and cable tying the hoses pulled the cooler out of the way of the front mudguard.

Thanks, that's two for just shortening the hoses.
Although i do like nice neat straight runs with tidy right angle turns - time will tell

I shortened my hoses but I still didn't have clearance. I noticed that some of my cooling fins had been badly bent out of shape by suicidal bugs so I went for a custom bracket/fly swat to keep my cooler protected and up against the frame.. see thread https://www.accessnorton.com/NortonCommando/front-end-clonk.25054/page-3 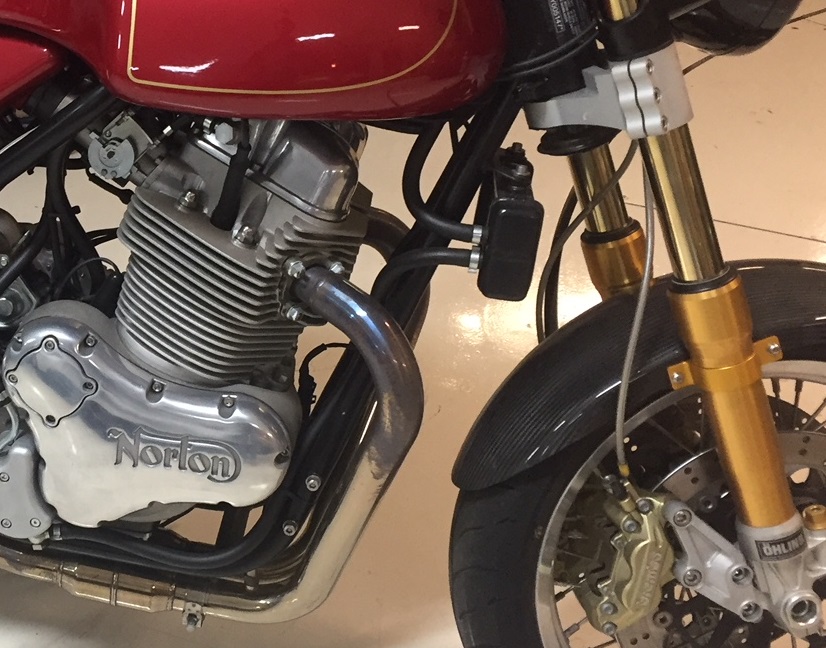 After shortening and zip tying hoses 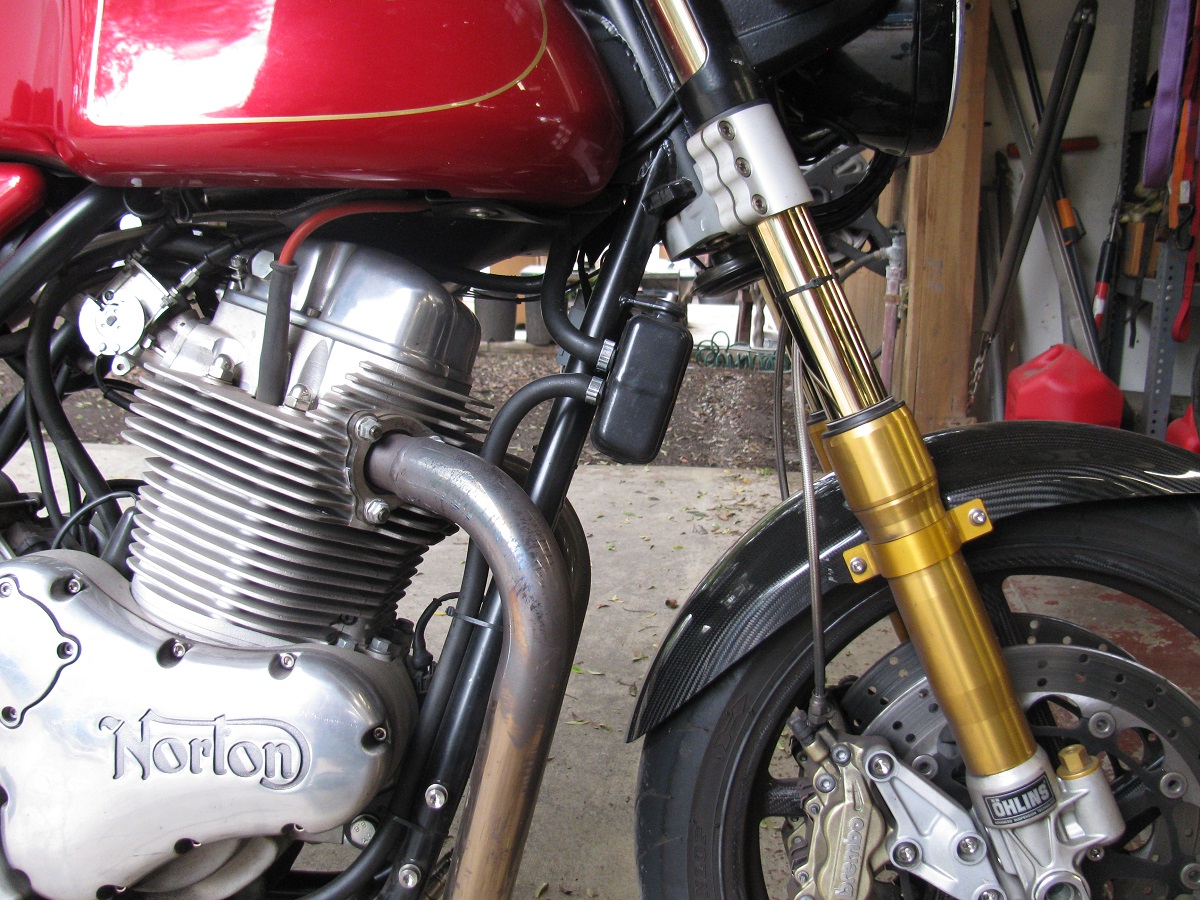 That was enough improvement for me, so I left it at that. So far no interference between fender and cooler.