I got quite a few comments about the panniers I set up for our recent NOCNZ rally, and I was so happy with how easy they were to set up and use, I decided to post a mini ride report on them for the 1500 mi/5 day trip I took. 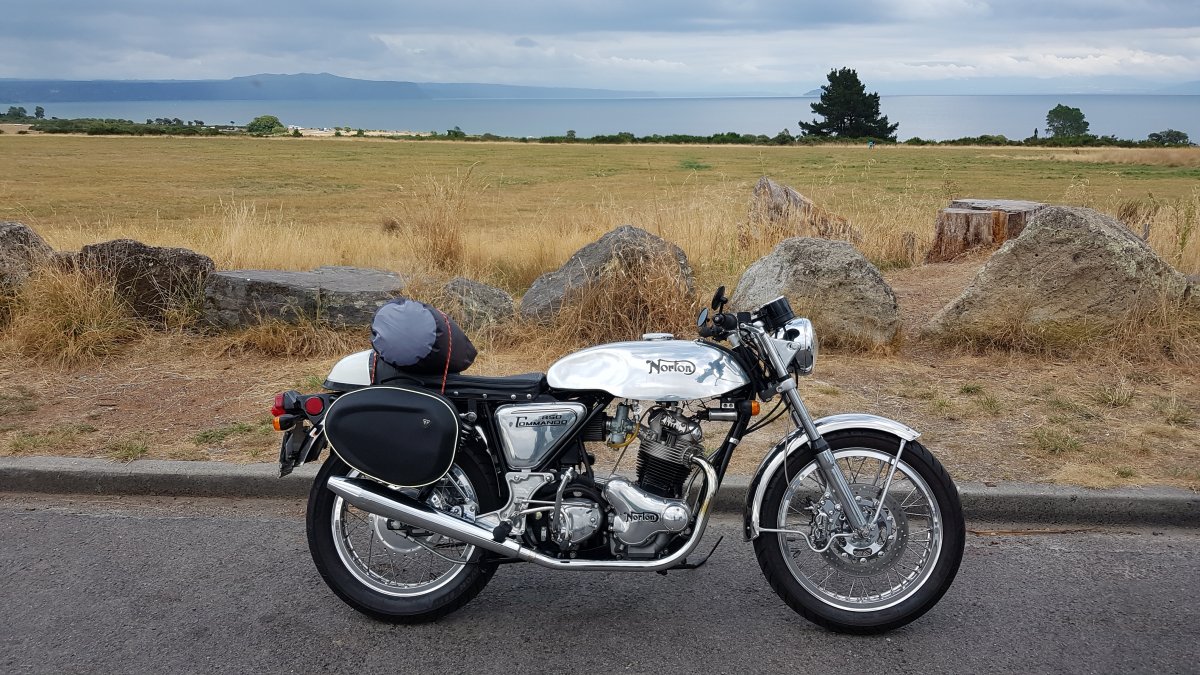 I got the idea for using these from @worntorn as he posted a while back that he thought that they would bolt up nicely, and reviewed them positively when used on his Thruxton R.

They are Triumph Nylon Panniers, part number A9518150. Be careful with the p/n as there are several for these style panniers, and they only differ in the mounting brackets. This particular variant is designed for the Thruxton 1200 and Thruxton 1200R.

I got them from the US off of ebay from Moon Motorsports, in MN, for $180 US plus $10 shipping in the continental US. It cost me about that much again for shipping+GST to land them in NZ, but since the same items are $899 NZ and special order here, it was a deal. If you are in the US, shop around and it will be a steal.

The panniers provide 30 litres of storage capacity in total, with each pannier capable of holding 15 litres. The panniers include an internal drawstring divider in the main section, a zipped inner pocket and a mesh Velcro-closed pocket in the pannier lid for those smaller items. 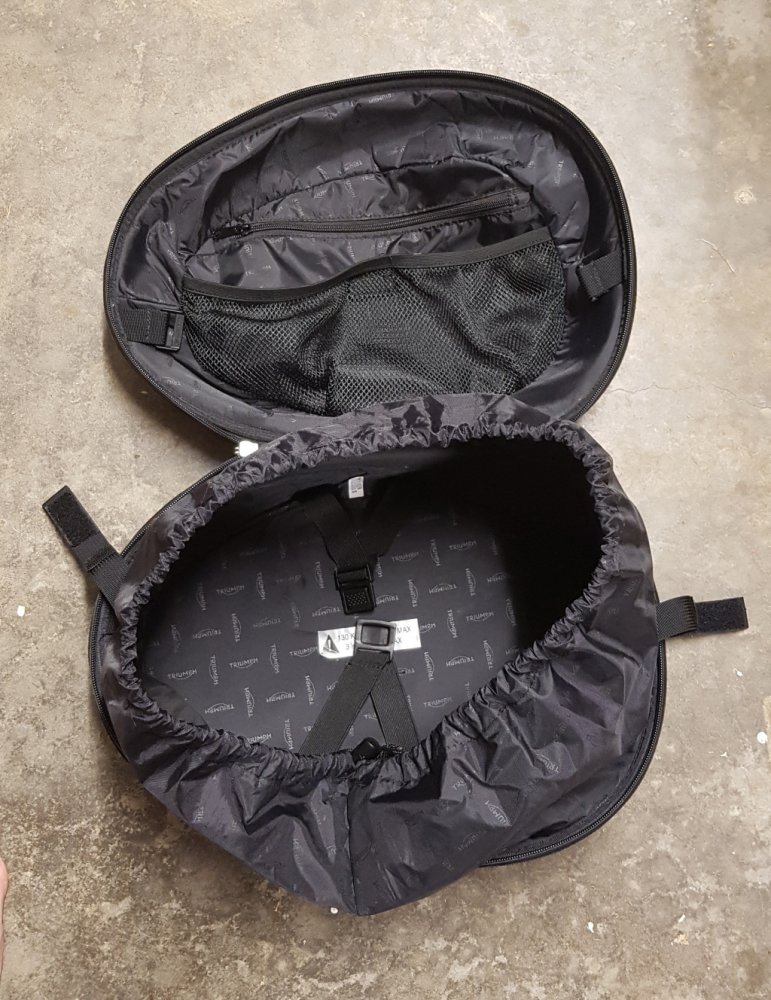 I had no problem with a fitting a weeks worth of gear (for warm weather, but including some long johns and a light sweater) in the two bags, including a quart of oil, a small spray can of chain lube, a bit of extra tools that I wanted quick access to, two tie downs for the ferry, and a water bottle. For longer trips, I can see just doing laundry at a hotel once a week, no problem.

I also had a small 15L dry bag for my sleeping bag, a pair of shoes, and a towel. This made a very nice lumbar rest, and the mounting frame for the panniers gave a very good lashing point to bungie the dry bag across the seat. If you need rain gear in addition to your normal riding gear, you would likely need to have additional storage for that from your panniers. I ride mostly in a Klim Badlands Pro suit, so that was not an issue for me.
The kit comes complete with a Rain Cover for riding in harsher conditions and all necessary mounting hardware.

I lost one of the elastic closing covers after about a half hour at 70ish mph, so I am not impressed with them. However, one of the five days of the trip was steady hard rain all day, and while I had packed almost everything in the panniers in large Ziploc bags, there was no water ingress whatsoever. Which is more than I can say for my boots. I was very impressed with their weather proofing, and I would not hesitate to use them in inclement weather without the covers. Next time, I will just give them a good spray with Scotchguard as insurance.

The panniers were very straightforward to set up, and Triumph claims 18 minutes for install on the Thruxtons, which I believe, since they provide all the hardware (metric) to do the job, and it is only four bolts per side.

For the Commando, you need to slightly enlarge the mounting holes for 3/8” bolts and the brackets will then bolt straight up to the outside of the upper shock mount and the inside of the pillion peg (which I don’t have on my bike since I have a solo seat now). Since I have a big drill press, this only took a few minutes. I think you could leave the bottom one, and mount it to the muffler bracket, but I didn’t like the idea of traveling long distance with that additional load on the muffler iso’s, which are already prone to failure. 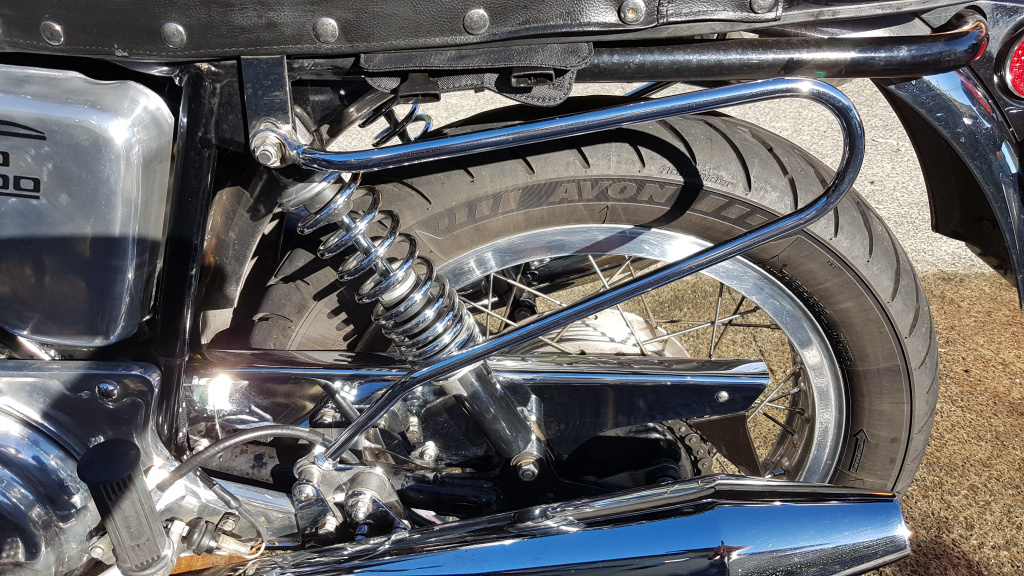 As you see, you will have to replace the knurled seat knobs with a nyloc nut, however, since the pannier bracket has a spoon shape that would foul the knob. I used a nyloc nut I had on hand, as I felt that should the nut work loose then the nylon would catch on the outer lip of the seat bracket as the split pins would. The flat spoon shape of the top mount of the pannier bracket allowed me to not use the outer lipped washer as well. If you want quick access under the seat, and don’t want to pull the tools out from the side cover (if you have them there) then what I did was use one of the mesh pocket to keep a 9/16 box wrench. Which I never needed, of course. 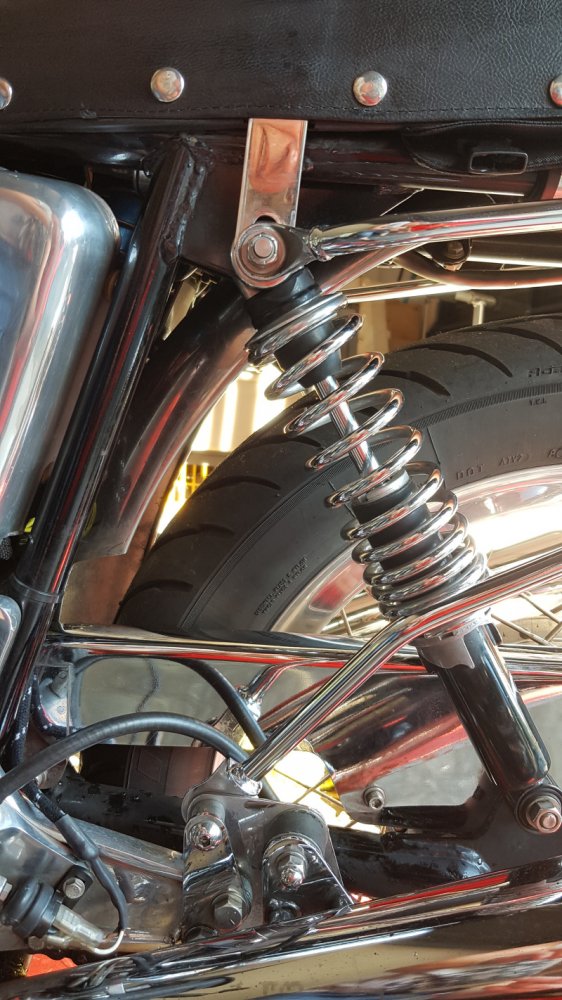 The bags have a separate detachable mounting harness featuring a quick-release system for your convenience that runs under the seat. It really takes about 15 seconds to get them on/off the bike. They are very secure, and at ~80 mph they were stable as. 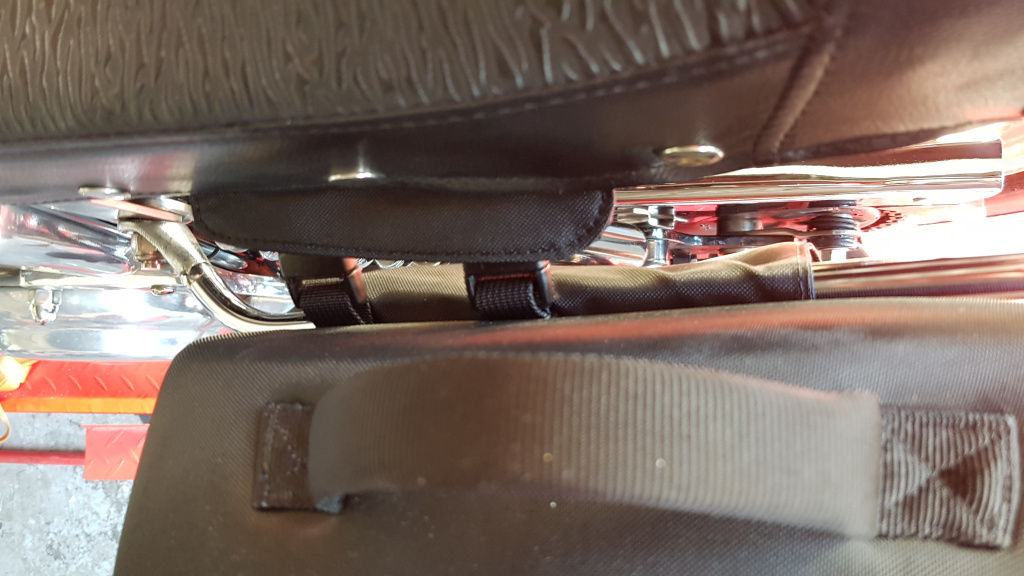 I used some 25mm p-clamps to attach them to the seat loop at the rear. Because of the length of them, and how they would mount on a Thruxton, I had to angle the clamp quite far down to take up the slack a bit. However, this was fine and not really apparent. I had hoped to do this on the front as well, but as you can see this would not work due to the shock mount gussets. My hump seat sits right on the frame rails, so they ended up resting on the harness, not ideal, but no biggie. I think they would likely not do this with a stock seat. 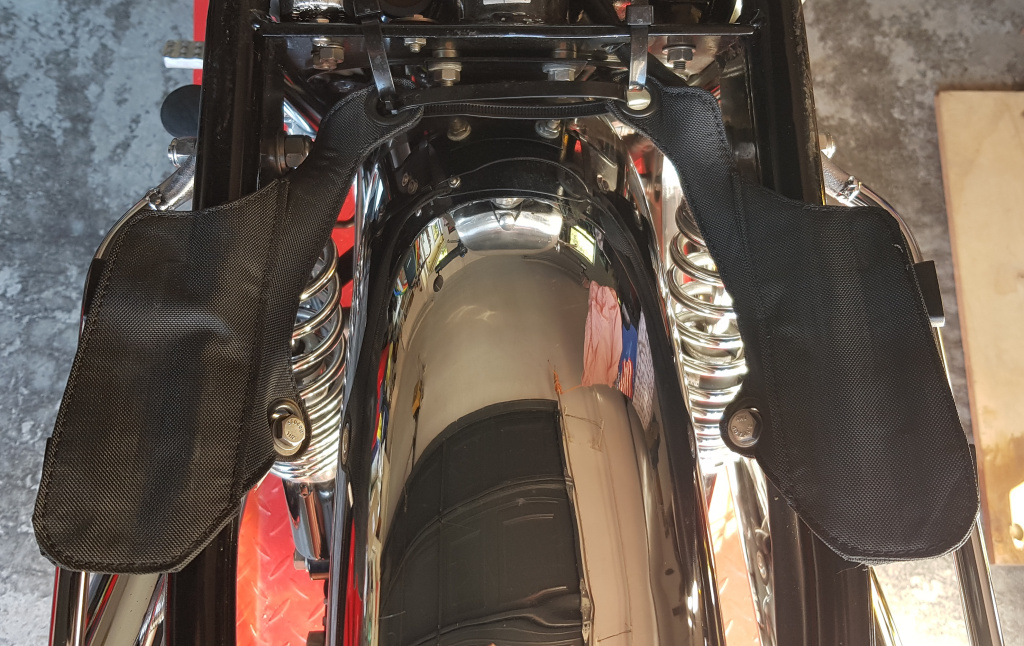 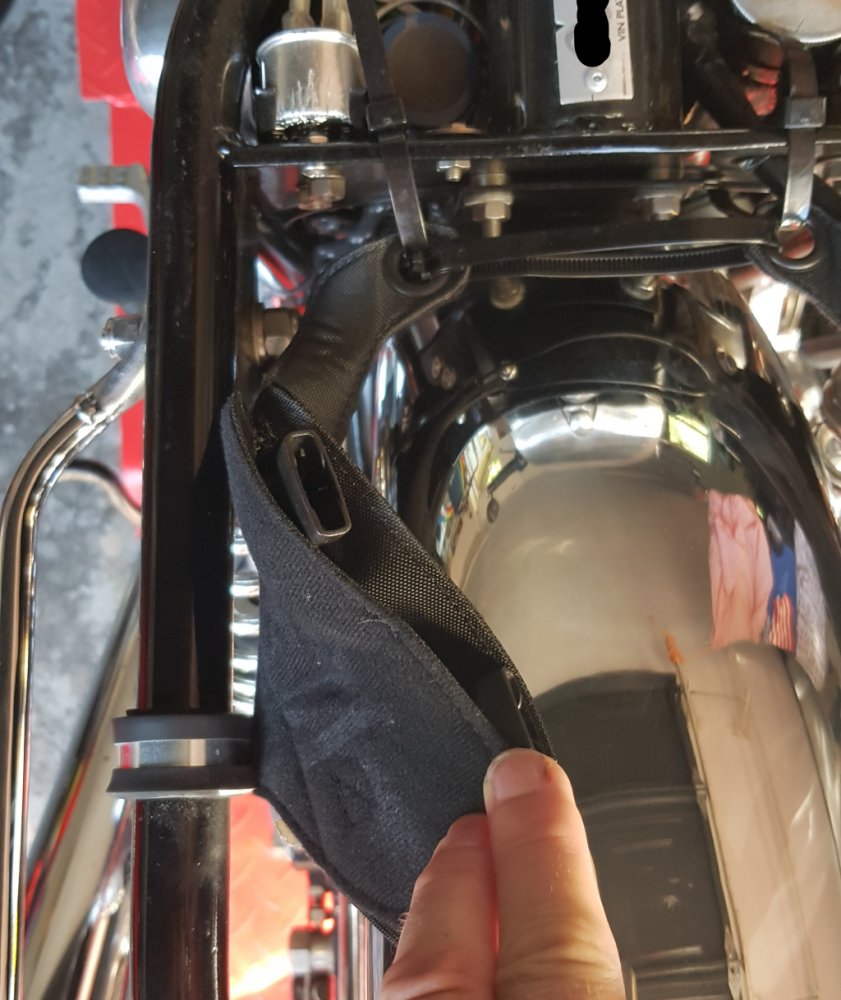 I wanted a day to ride them to/from work on the motorway and I had literally two days after I received the panniers before I had to leave for the rally (NZ post was the slowest I have ever had a package come from the US, and they had them for a month!). So, I did a 11pm solution and used some heavy removable zip ties to secure the front mounting points. This worked very well. I lashed them together across, and also around the frame plate at the rear of the spine tube. They didn’t come loose, but I would probably look at fabricating up some sort of metal bracket attached to the inner of shock mount for the next ride.

Hope this is useful info for someone looking for an excellent storage solution.
Last edited: Mar 3, 2019

That was great.
Cheers,
Thomas

Nice report thanks.
The bags and brackets might be viable option, with a little work, for the 961.

ntst8 said:
Nice report thanks.
The bags and brackets might be viable option, with a little work, for the 961.
Click to expand...

Next time you are up in AKL with the 961 if you swing by we can mock it up and see.