How I spent my summer vacation....

Well, not exactly, but I did get to spend 4 or 5 days straight in the shop this summer. Anyway here's my '75 850 cafe racer as it has looked since I built it about 15years ago. 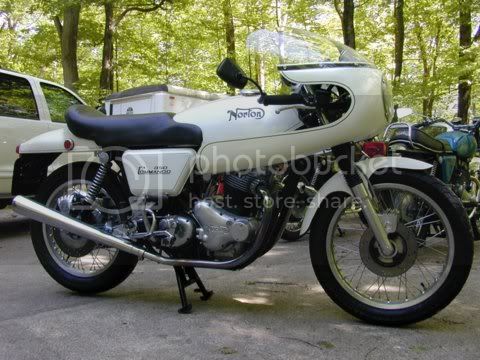 It needed some upgrades and wasn't getting used much, so it went on the work table late last winter. I'm nearly ready to take it out for a shake down (waiting on a couple minor items) but had to take it off the lift to helicoil a fender stud hole in the front fork. So I rolled it out and took a couple shots. 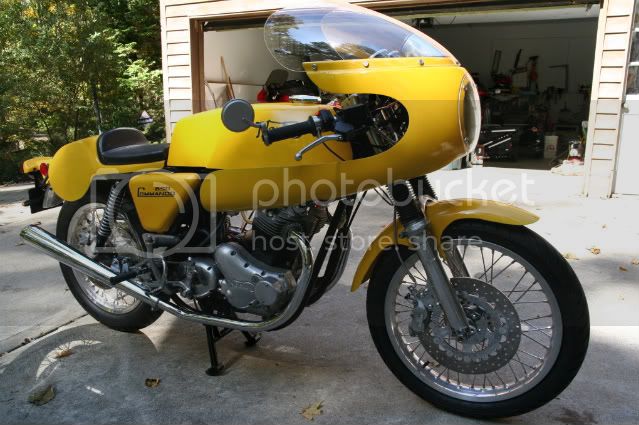 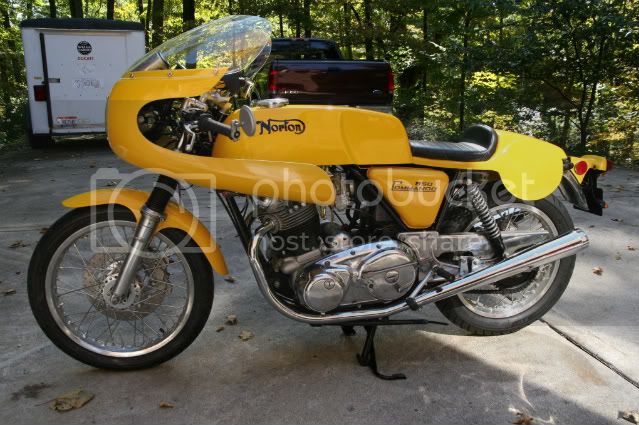 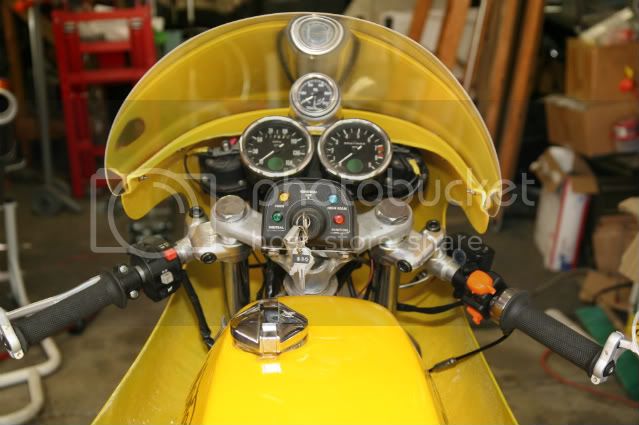 It's certainly not the aggressive refurb that Grand Paul is attempting with the monoshock, but it got new brakes, switchgear, wiring harness, bodywork, oil tank, front end with brace and RaceTech emulators, lace a new front wheel, handlebars, etc. One of those projects that was going to be a simple tank and seat change but just kept going.
In defense, this was not the only project this summer. Although it's not a Norton, I had to upgrade the grandkids ride from this.. 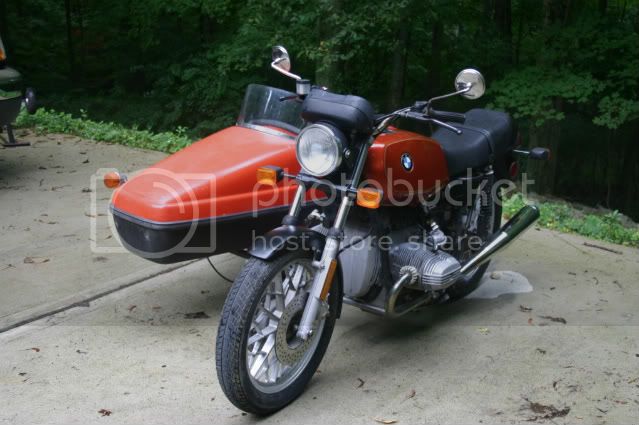 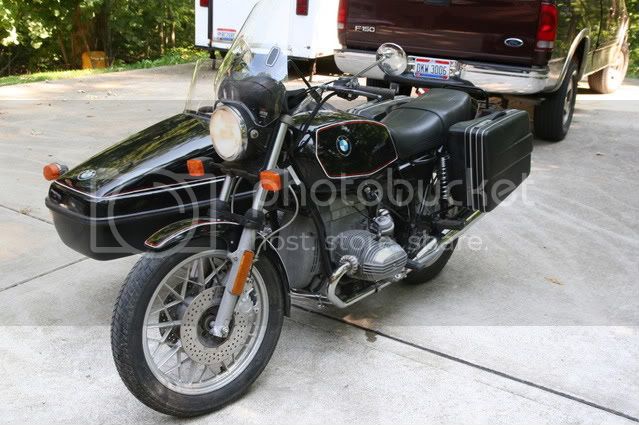 Wow! Nice work! Your original white Norton looked really nice so I'd have to say the biggest improvement in looks alone is the beemer. That's not to say the yellow isn't nice though, it looks great. My next one will be yellow too.

Ron , No hiding from the cops now aye. All white gets you disappearing out of the minds eye and harder to describe. This work took some guts. Your safer in one way being seen, hard to say "I didn't see him" . What # do you have in mind?

Well thanks, but that picture is from several years ago. When I rolled it on the lift, the paint was chipped in places and the chrome on the Bub Conti-replicas was very dull. Plus I wanted to try to improve the front end. I had to get rid of those cheesy Dunstall brakes. The motor is plenty potent, but between feeling like I was sitting 6 inches above the bike and the brakes, fast cornering was not at all comfortable. I dropped the tire sizes from 100/90-19 Dunlop 591 at the front to 90/90-19 AM26 and from 120/80-18 rear to a 110/90-19 AM26. I'm anxious to see if I improved it or not.

The sale of the Dunstall front end and wheel financed the entire re-furb. Got to use creative financing in this economy.

Does anyone know of a shop that will/can rechrome the Bub mufflers? I really liked the simple lines and the tone. The chrome just wasn't very good. Too bad they don't make them any more.

You know I get all gooey when I see Dunstall cafe bikes; I've always liked "school bus yellow" since my oldest brother painted his '68 Yahamama Big Bear 250 scrambler way back in '70 (he had crashed it on a hairy wheelie gone over the top, and so repainted it on the rebuild)

Very classy bikes. is that a Velorex hack?

Yes, it's a 562 and its light weight matches the little R65 nicely. And "hack" described this one! I don't know the age of the rig, but it's pre-'80. The PO had cobbled the mounts and it was impossible to set the toe-in. Luckily parts are available from Velorex USA and a new front mount got it sorted.

I remember an INOA rally at Dick Klamfoth's (Honda Hills) where there was a fellow from Colorado ripping about with a car on his Commando. It inspired a buddy of mine to mount a Spirit (California Side Car Co.) on his '71 for a while. After working with this one on the R65, I would not recommend it. I think they were both lucky the lightweight frame tubes didn't bend or break.

The late Bob Schanz (DomiRacer) used to have a G12 Matchless with a car that he rode for a number of years.

Stunning! I like the tight instrument grouping and those look like good switches. Nicely hidden blinkers. Where did you get the mirrors from? Is that tank fiberglass and what did you coat it with if you did? You did the right thing with that big front disk.

Thanks, Jean.
The switchgear is Ducati. The mirrors are the cheapies being sold on eBay. I am surprised at how well finished they seem to be. They have a ball mount that is clamped by a set screw. Time will tell as to how well they work.
The tank is a fiberglass one I picked up a couple years ago and was unused. It was yellow gelcoat so I matched the paint to that and only clearcoated the tank I coated it inside with Caswell epoxy.
I'm running the same front and rear disc setup as my Interstate. This one uses a QTMI/Brembo (CNW type) disc, but the one on the Interstate is a similar Brembo without the chrome center. They work quite well . I have a 13 mm Magura master cylinder on this one.

Did you have to beef up the BMW frame? Those bikes look classic now.

Did you have to beef up the BMW frame?
Click to expand...

There is a small subframe that bolts to both left and right frame tubes at the motor mount bolts. This holds the lower mount. It was on the rig when I got it. Most sidecar gurus do not recommend mounting a car to a /6 or later BMW without a subframe.

That acually was why I bought the Chang. I figuered I'd get the sturdy frame and when the engine finally toasted I'd install a BMW. A couple of my friends are running BMWs with subframes with no problems at all.
At this point it looks like this Chang engine may still be running when I retire to New Zealand, if they are still easy to come by I may have new bike built with a left hand sidecar and a BMW engine with electric starter.
Unless I am too shot to start it I'd like to ship my current Norton over, and maybe one of my Goldwings.

When the Commando was introduced and people found out "no more Featherbeds", you could probably have heard the howls from the sidecar community this side of the Atlantic. The Atlas was a real favorite of theirs. Norton specifically said in their sales materials that "attaching a sidecar to a Commando would almost certailny result in a frame failure and also voided the warranty".

I hadn't been at N-V very long when we got a letter from an Atlas owner complaining bitterly about the rotten gas mileage and top speed of his bike - "nothing near what they get in the magazine test rides!" It was so bad, he was invited to visit the factory so they could figure out what the problems were. When he showed up, he was pulling a double-adult sidecar with a small third seat in back for a child!

frankdamp said:
...- "nothing near what they get in the magazine test rides!" It was so bad, he was invited to visit the factory so they could figure out what the problems were. When he showed up, he was pulling a double-adult sidecar with a small third seat in back for a child!
Click to expand...