bentrod said:
Deep down I guess the Commando was and still is my favorite.
Click to expand...

My guess is, it came down to the TYPE of riding you actually do the MOST of. THAT probably determined which bike you kept. I'll bet you don't do a lot of long-distance / highway riding...

GP, you are correct, my last long distance ride was cross country NY to Calif and back on the R90. That was about 10 years ago. I'm pushing 76 years old so my long distance riding has past.

I owned an R90S for three months. I always lusted after them. Those three months shattered the dream for me. First, I was scared of scratching the one-off Daytona Orange paint work. Second, it wasn’t happy below 50mph as it had very tall first and second gears. Third, my wrists didn’t like the bar position. I’m probably in the minority, but I love the /5 gearbox and bar/seat positions. Also I never worry about banging it up a little and riding it on junky winter days.
Here they are together:

Can you gas a BMW really hard when it is cranked over ? I always believed that the 30s Rennsports must have been kept very vertical. Although Troy Corser did OK at Goodwood.

I rode an R100RS in the early 80's , it was easily the worst big motorcycle I've ever ridden. Vibrated worse than a Triumph twin, slow, and looked like a sack of shite. i'd rather ride a Honda C90

I remember riding my R75/6 slowly through the local downtown area, looking in the shop store windows and on seeing my reflection thinking “What a nerd”.

However, after 44 years of ownership and many thousands of miles of reliable riding – what an excellent motorcycle. Quiet, stable and relative vibration free it’s a nice platform for traveling. I love my Commando but its hard to beat the beemer for reliable cruising. 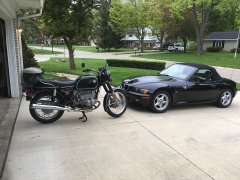 My R100GS airhead build quality is impressive. Built to last forever and cross the earth. The Commando, well...... built to rebuild, or to stay running until the end of the warranty? But smaller, lighter, better looking, better sounding and a bit more dynamic to ride, IMO. Different tools in the shed.

[QUOTE="daveh, post: 283673, member: 867"
I have to say I was pleasantly surprised at both the handling and performance of the 75/6, as I didn't expect either to be that good. It doesn't wallow, even with the original shocks (which will be replaced), the steering is neutral and it carves a nice, tight arc in corners. The performance is surprisingly good for its time, too. But the old Beemer weighs a ton, and the lack of torque and that slow, clunky gearbox eventually get to you. There's not much you can do about either, whereas there is a lot you can do with a Commando.
[/QUOTE]

Old thread, but let's get the facts right.

I'd say for the robustness of the build and the separate cylinders and heads, the beemer has a surprisingly low weight.

trident sam said:
I rode an R100RS in the early 80's , it was easily the worst big motorcycle I've ever ridden. Vibrated worse than a Triumph twin, slow, ...
Click to expand...

Did you try cruising it at 80+ on the open road? THAT is where they shine.

In that realm, most BMWs are just breathing gently, no stresses whatsoever (if you have some sort of nominal windscreen).

Then try cruising on a Commando or Trident at 80 all day. I did it once, on my MkIII Interstate - 620 miles from morning till a while after dark, thru the Texas hill country. FANTASTIC ride, but at 80, the Commando was VERY busy and vibrating enough to ruin an exhaust port thread ($$). Trident is very similar, but even twitchier...

Trident sam wrote: "I rode an R100RS in the early 80's , it was easily the worst big motorcycle I've ever ridden. Vibrated worse than a Triumph twin, slow, and looked like a sack of shite. i'd rather ride a Honda C90"

Gosh. Where to begin. I had a 1978 R100RS. Low rpm vibe, yes. But above idle, the faster you went, the smoother it got. I recall doing about 105mph with panniers loaded for camping and it felt rock solid and like it could do it all day long.
It didn't have the snort of a Norton, but then if you want that, then ride your Norton.
Looks are personal, but the low silouette fairing and streamlined seat still look cool.

en.wikipedia.org
First production bike designed in a wind tunnel, and it looks it.
One of the few bikes I sold and I regret it.

grandpaul said:
Did you try cruising it at 80+ on the open road? THAT is where they shine.

In that realm, most BMWs are just breathing gently, no stresses whatsoever (if you have some sort of nominal windscreen).

Then try cruising on a Commando or Trident at 80 all day. I did it once, on my MkIII Interstate - 620 miles from morning till a while after dark, thru the Texas hill country. FANTASTIC ride, but at 80, the Commando was VERY busy and vibrating enough to ruin an exhaust port thread ($$). Trident is very similar, but even twitchier...
Click to expand...

I've been riding Tridents and Commandos for 40 years and twitchy is not a word I'd describe either of them. I've also ridden that sort of mileage in a day, Trident turning at about 5000 rpm and Commando 4 1/2, bit of a sore arse maybe but nothing I couldn't put up with. If you ruined an exhaust port thread, then the rose should have been tighter.

trident sam said:
I've been riding Tridents and Commandos for 40 years ... Trident turning at about 5000 rpm
Click to expand...

But did you cruise the BMW for more than a couple of minutes at highway speed and/or above? I've gotta say, if I had the choice in THAT mode, (highway for all day) it would be the Beemer every time...

Many of these comments illustrate what most of us know: that one motorcycle is not enough for all types of riding. I currently own both, a '72 750 Roadster and a '76 R75/6, and enjoy riding both of them for different reasons. I have a 19t sprocket on the Norton which kicks the RPMs up at high speeds but provides some low end acceleration. The BMW is not as fast through the gears, but it's not bad. It has a lower geared final drive, 37/11, which I believe was an option over the standard 32/10, and provides some decent pickup, especially without luggage. I would call the Norton a "sport bike" and the BMW a "sport touring bike" to use some current terminology.

In 1981 I rode two up with first wife time from northern burbs of Detroit to the National BMW Rally being held at the Loretta Lynn Dude Ranch – west of Nashville – about 620 miles. We drove straight thru – stopping for gas, food and biology.

My R75/6 was loaded. Krauser bags filled, Eclipse tank bag and 130# of wife on back. The speed limit recommended for “full” Krauser bags was 80mph I believe. We observed that, but in reverse and used 80mph as our lower speed limit. Probably foolish – but I was young and invincible.

Bottom line. 620 miles, two up, loaded bike, 10 hours of riding in +80F and the bike never faulted. The ex would fall asleep at times and I would know as the bike started to list to one side. Not many bikes in those days could be that good on the road. Still have it, still ride it.

I have both Norton and BMW. I see the Norton as the motorcycle that I'd take for a morning or afternoon of very spirited, stress relieving back roads; it responds more quickly to my inputs, presents a more sexy silhouette, it is easier for me to swing a leg over and it has all that sand cast polished aluminum; the quintessential picture of the expression; "Perfect Imperfections". The Norton was built be people capable of making mistakes (just like me), so it gives me the opportunity to participate in the "build" process.

I think of my R90S as the two-wheeled-business-jet. I take it for long rides with nights on the road, I never think about it breaking down. I did change the riding position by adding dog-legs moving the handlebar higher and further back. When I built it I installed the factory 336 cam which makes itself known beyond 3500 RPM; if I had it to do over again I would have kept the standard cam. It will cruise all day at 100MPH or more; I proved this to myself on a 300 mile day from Sugar Loaf mountain in Maine, into Canada, back through Jackman, down to Skowhegan and back to Sugar Loaf. It doesn't handle as smartly as the Norton, but is as reliable as a rock . 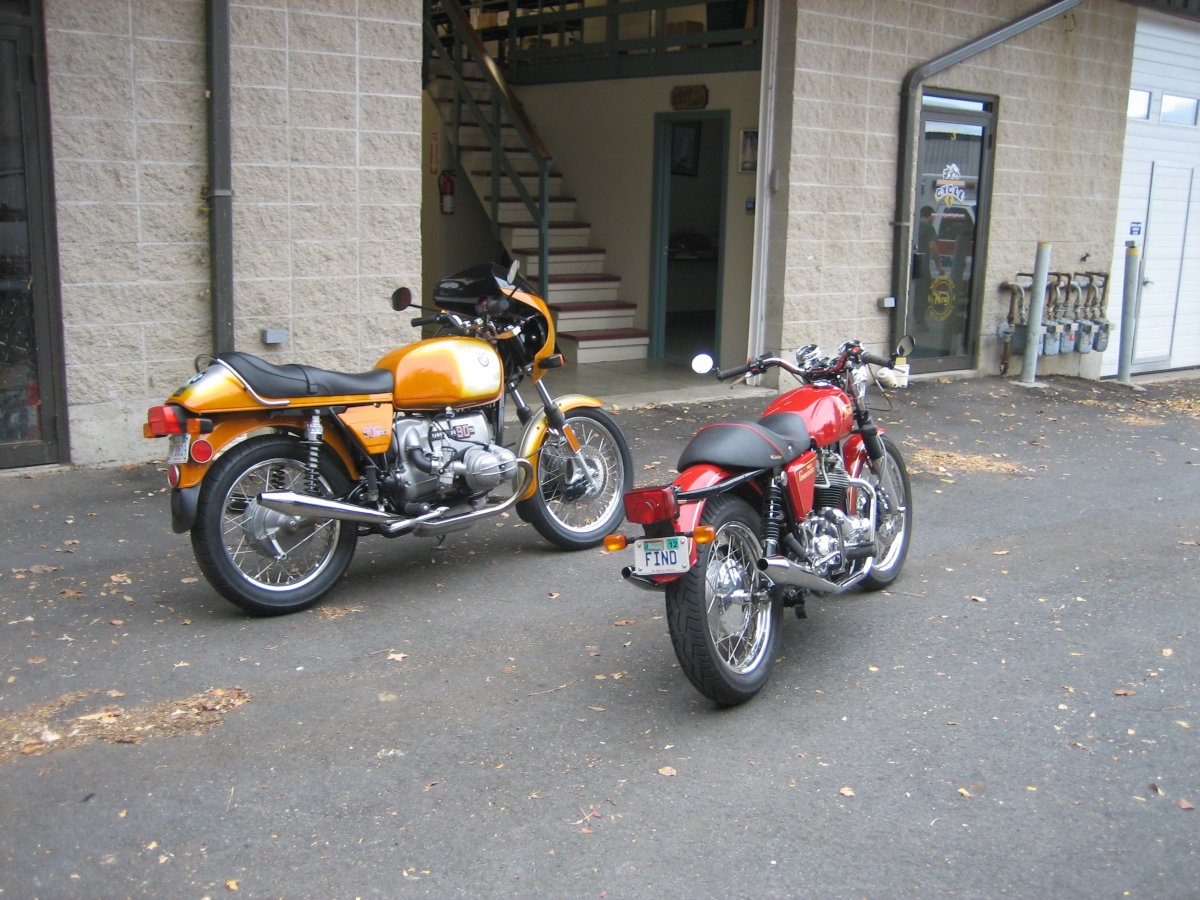 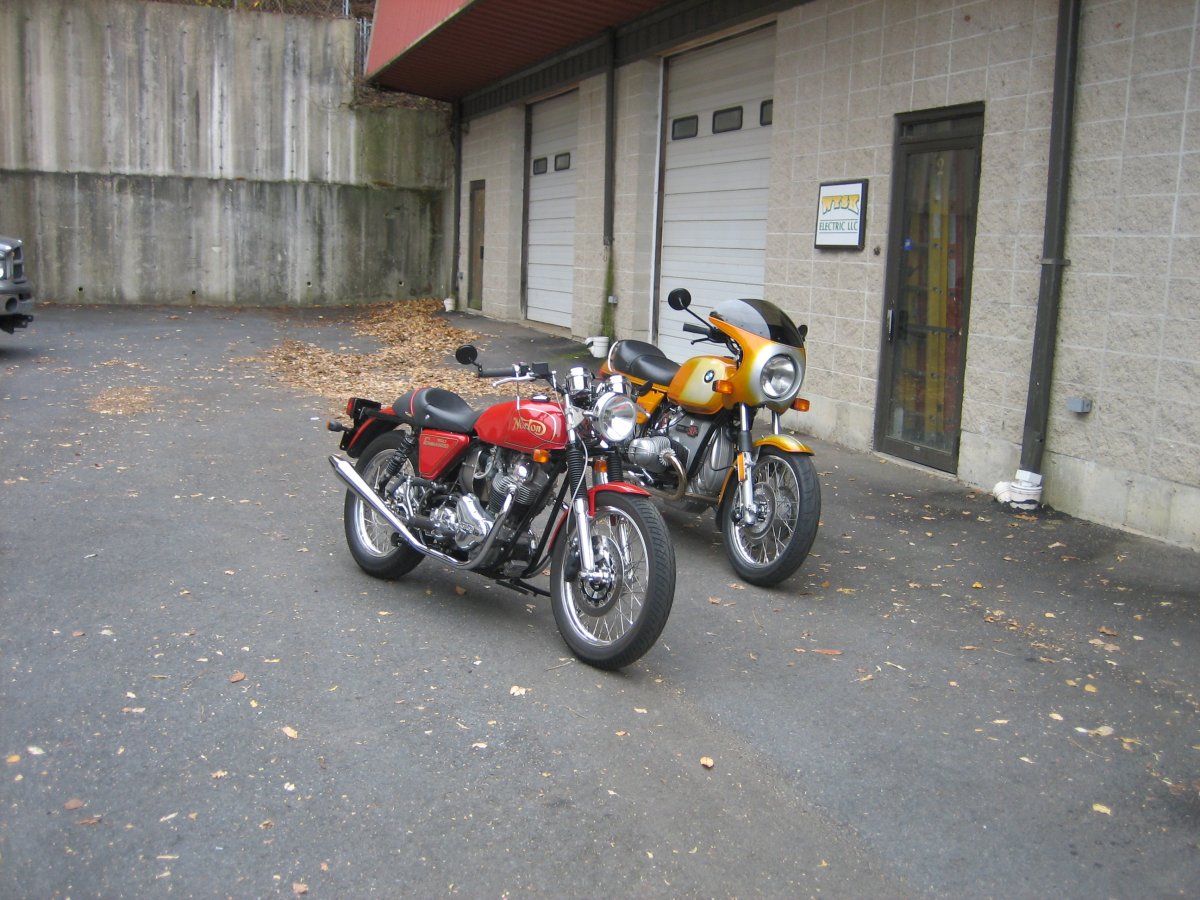 A couple of nice looking rides there RS.
Isn't there a law or at least a rule of not allowing Norton mufflers on BMw's?

MichaelB said:
Isn't there a law or at least a rule of not allowing Norton mufflers on BMw's?
Click to expand...

Yeah, maybe there should be in SOME cases... 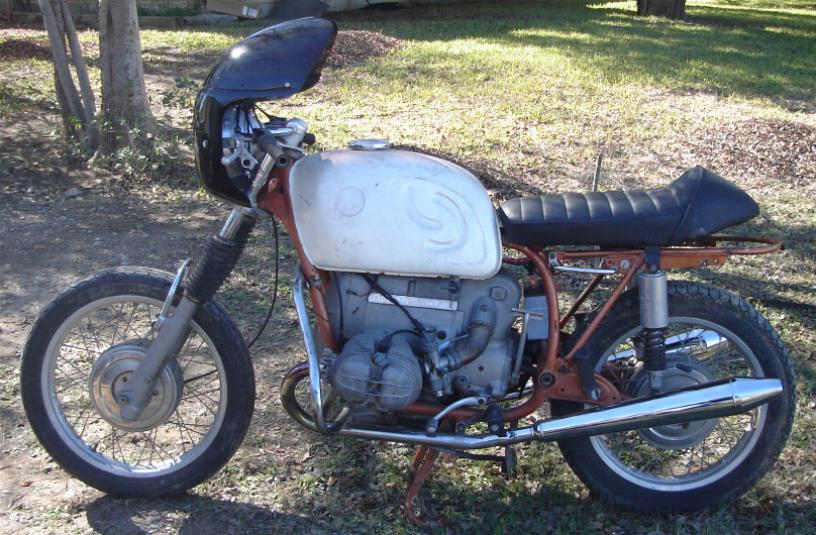 Those are two great looking bikes RoadScholar. They really complement each other.

I took the /5 to the store tonight and it was the smoothest, most modern , quietest and best braking bike I could remember. Then again, I could remember only riding the Matchless single earlier in the day. For its time, BMW really got it right.
You must log in or register to reply here.
Share:
Facebook Reddit Pinterest Tumblr WhatsApp Email Link