I really like your Yamaha. It has obviously not been stuffed around with.

I'll be getting around to refurbishing THIS one sooner, rather than later.

1980 KZ1000 "standard" (A4) with Tracy 2000 quarter fairing and Mac headers (V&H headers int he photo have been replaced). I also have the original exhaust in very good condition which will be going back on the bike. I'm the only owner, bought it with 32 miles on the clock in 1985, It had been in the dealer's warehouse in a corner after one of his sons had ridden it around one weekend 5 years earlier.

Just needs the usual flush & make-run, plus tires. They sure aren't making these any more...

I have ridden Z900 Kawasaki. They look big, but feel like an old British 350. I expected them to feel cumbersome, but they are very easy to ride in comparison to some other bikes. Back in my day a few of the kids had Z900s and Z1000s and thought they were huge - I don't think they had experienced many other bikes except for Japanese two-strokes. My Triton felt as though it was much larger. An Eddie Lawson replica Kawasaki would not be all bad.

The Z900 feels completely unhinged compared to the KZ1000. The old Z bikes felt like they wanted to toss you off when you went over bridges with expansion joints, the KZ is firmly planetd. But, yes, still big and heavy (although the almost 100HP feels real nice)

When I rode the Z900, I had only ridden old British and American bikes. The Z900 was faster but different. I rode a new BSA Rocket Three, it did a wheel-stand when I turned the throttle at walking speed - waste of space ! While it was going upwards, it was not going forwards.

I have Classic Japanese bikes a 72 Lavender GT 750 and a Green 76 Z900a both are totally like new try buying one of these. A Honda CB 750 recently sold for £ 52,000 could it be that people who wanted these bikes in the 70s can now afford them hence the cost, I also have 70s British bikes. Maybe we see life through rose tinted glasses as whenever i ride any of these bikes the certainly feel nothing like they did in the 70s or maybe its just me.

Just avoid at all costs paying ott inflated prices for an early "so called sandcast" CB750- the crankcases NEVER went anywhere near a grain of sand!

As far as i am aware therefore no such things as sandcastle CB750s remember at an
early meeting at i think the T T or Brands a C B 750 crash and Honda trying to get to the crash first due to the fire seem to remember someone said the engine castings were Magnesium and Titainuim i think.

john clark said:
... T T or Brands a C B 750 crash and Honda trying to get to the crash first due to the fire seem to remember someone said the engine castings were Magnesium and Titainuim i think.
Click to expand...

I rode a CB750 when they first appeared in Australia. What was good about it was it did not rattle or leak oil. But in every other way, they were a waste of space until they had CB450 pistons fitted. I can remember racing against them at Calder Raceway and weaving my way through them on my 500cc Triton. The CR750 was not all bad, but nasty to ride. These days the CB750s in historic racing are mostly 1100cc capacity and run methanol. They still handle like bags of shit. The last time I raced, I rode my Seeley 850 up under the four leaders in a race, at turn two on Winton. They were all out on the ripple strip.
That KZ Kawasaki has got merit. A good guy on a good one of those, would be hard to beat. In the old days, most of them never had real race cams fitted. Yoshimura stuff was very mild.

Like any other bikes, a CB750 can be made to run and handle quite nicely. all it takes is money.

For what it's worth, I sold the KZ1000 to a guy that restores the sought-after classic suberbikes and sends them back to Japan. Got a check on FedEx for $7,400 the day after we talked on the phone. Didn't have to do SQUAT to the bike, except air up the tires to push it out to the truck a few weeks later. I already miss it, but life goes on, and I've still got at least a dozen bikes to sell. I'm pretty sure the buyer will get over $20K for it, but he'll EARN it, the bike was sitting for over 10 years (although it was in a garage, with a cover)

The biggest advantages of the early Japanese bikes were:

They didn't leak oil. They didn't need kicking into life (even the small ones had electric start). They were reliable and didn't need a lot of "fettling". You wheeled it out of the shed, sat on it, put the key in and started it and then rode away.

Even the prototype Commandos didn't do those things. You had to "tickle" the carbs and kick it into life. Also, things used to get out of adjustment fairly quickly. A lot of the ancillary gear was not up to the loads imposed on it. When I was doing the development testing, we ran a scheme where I rode from 04:00 to noon, then the works mechanics had it until 16:00. The second test rider then rode from 16:00 to midnight and the mechanics got it back for another 4 hours before I came back at 04:00 for my next day. We ran this schedule until we'd put 20,000 miles on the bike. Two other riders did the same on the other prototype.

Once the reliability had improved, we were doing around 450 miles a day in 8 hours riding.

Got to agree Frank , remember as a 14 year old in Scotland all of us school lads noses pressed to our local bike shop in Hamilton window in 1969 to see this new 4 cylinder 4 carb electric start reliable bike but i still bought a Commando when i got old enough.

In the early 1970s, a friend of mine worked for a dealer doing pre-delivery on Commandos and Kawasaki two-strokes ( H1 and H2). They use to take then to Richmond Boulevard in Melbourne to test ride them. The Commandos were as quick as the H2 two strokes, which surprises me. An H2 in road racing back then was almost the equal of a Z900, all other things being equal. I liked the Z900 I rode, but it gave nothing like the adrenalin rush a Commando can give it's rider. The funny thing is that these days, I hate the adrenalin rush because it can make you make mistakes.

I never got the adrenalin rush when I was working at N-V, despite the performance we enjoyed. I think it was because I was always listening for potential "gotchas", of which we regularly got a lot. Even with the testing on the AJS "Stormer", there were always "gotchas".

The most puzzling one on the Stormer was a ringing noise from the engine. Eventually, I persuaded Peter Inchley that we should take the cylinder off to examine it. Much to everyone's surprise, we found a series of ridges about 60 thousandths deep around about half the circumference of the liner, centered on the exhaust port and about every 1/10" apart, from below the exhaust port to just below the head. Several of the cooling fins were cracked and a couple were missing.

We'd been running the bike as a typical street machine, using 2-stoke mix fuel. Pete figured the ridges were instantaneous welds between the rings and the barrel, caused by the high temperatures. We switched to Castrol "R" for a while, with a new barrel installed and the problem went away. The only snag was that "R" is vegetable-based and doesn't dissolve in gasoline, so you had to shake the bike from side to side to re-mix it if had stood for more than an hour.

I assume they fixed the issue for production. I'd left for Boeing a couple of weeks after the temporary fix was made and never got the full story.

I'd like to find a Stormer over here somewhere, to use as a run-about, but at 77, I'm not sure DW would approve!!

I added this to the stable just about a year ago -1990 Honda GB 500 - always regretted not buying one when new - ( would have been cheaper too ! ) Available in the USA for about one year only -1990. Many languished on showroom floors for a year or more and were deeply discounted to move them . Was about to bid on one remotely through Mecum when a buddy of mine found this one for me . I called the dealer and asked if they would take a deposit to hold it till the following week pending my traveling there and seeing it and approving - no problem . Well one look and a ride and it came home with me.

Completely original except for tires and battery and nearly showroom new condition.

Honda obviously took some styling clues from Velocette . It is a real joy to ride but possibly the most cold blooded bike I have ever ridden - very unhappy until it is very warm .

Thanks for looking _ RT

Richard Tool said:
I added this to the stable just about a year ago -1990 Honda GB 500 - always regretted not buying one when new - ( would have been cheaper too ! ) Available in the USA for about one year only -1990. Many languished on showroom floors for a year or more and were deeply discounted to move them . Was about to bid on one remotely through Mecum when a buddy of mine found this one for me . I called the dealer and asked if they would take a deposit to hold it till the following week pending my traveling there and seeing it and approving - no problem . Well one look and a ride and it came home with me.

Completely original except for tires and battery and nearly showroom new condition.

Honda obviously took some styling clues from Velocette . It is a real joy to ride but possibly the most cold blooded bike I have ever ridden - very unhappy until it is very warm .

Beautiful bike, there was a GB500 for sale on CL not too long ago in the tri-state area. It would show up when I searched for "Norton"! Great looking bike and rare, nice to see one in such great shape. 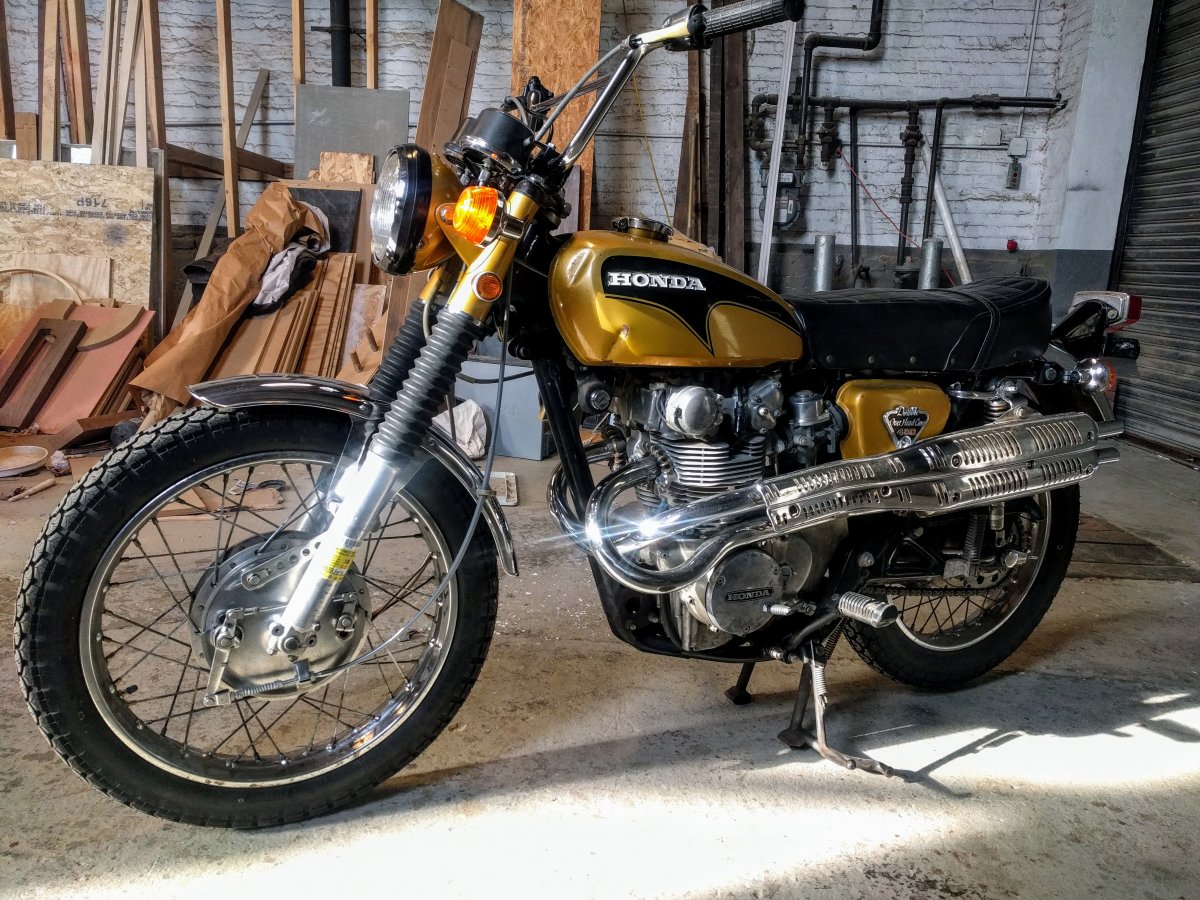 Nice ! Seems you and I may be kindred spirits !
Had a CB 350 that came my way a few years back for a hundred bucks . I bought it sight unseen as it was in a horse barn buried under the winters supply of hay . Had to wait till the nags had chewed their way through most of it before I could get at it .
Decided against redoing it as my heart was in the Norton’s.
Put it up on Craig’s List for two hundred bucks and the phone rang off the hook within an hour . A young service man came for it with his younger brother - they were going to do it together as a project. He had just returned from a Combat tour in the Mideast. He handed me the cash and I handed it right back to him along with the title . Helped him load the bike and thanked him for his service . God Bless him .
Last edited: Aug 17, 2019
You must log in or register to reply here.
Share:
Facebook Reddit Pinterest Tumblr WhatsApp Email Link
Top