Ashamed to be British?

Caned? No.. we dumped corporal punishment too, for better or worse?

EstuaryBoy said:
Caned? No.. we dumped corporal punishment too, for better or worse?
Click to expand...

If you think that ccapitol punishment works as a deterrent to violent crime, full stop, just look at this. 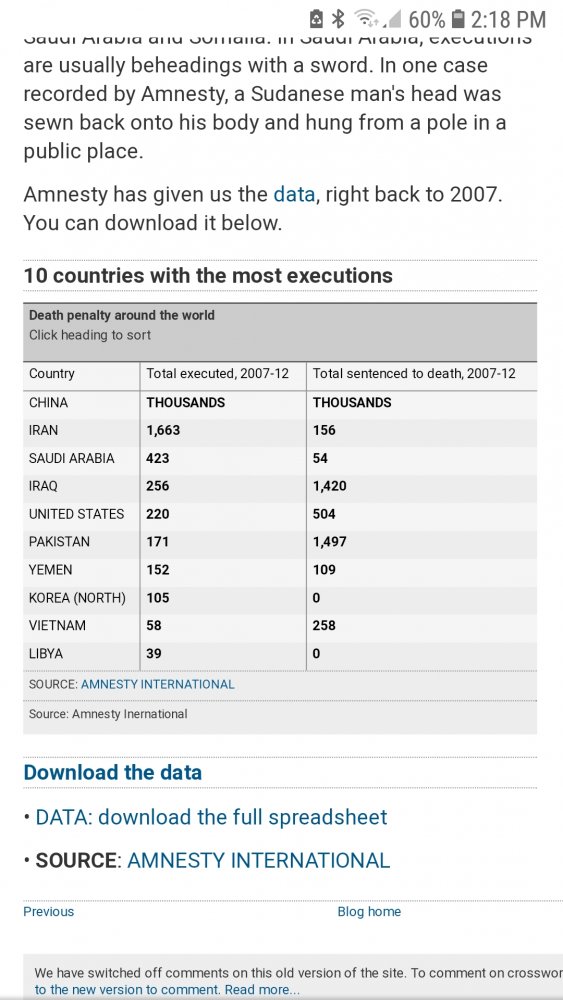 Vs the cost of keeping them in prison for life?? And those it doesn't deter get their just rewards....

Don't get me wrong, I am not necessarily opposed to capital punishment. But, it is a punishment NOT a deterrent.

We digress but while on the subject, isn't it our whole penal system that needs a rethink. As for our prisons, I've had billets a lot worse, seen jail's that would make your toes curl but still full so maybe not the deterrent intended. Physicopathic criminals won't be deterred whatever you do to them, career criminals see it as a risk of the job and I knew of one petty criminal that treat our system as a way to avoid the winter cold. No easy answers but we can't continue as is!

gortnipper said:
Don't get me wrong, I am not necessarily opposed to capital punishment. But, it is a punishment NOT a deterrent.
Click to expand...

Punishment is how some see it. Personally I see that kind of ‘an eye for an eye’ as uncivilised and barbaric (tho I’d think differently if it were mine who were victims).
My belief is a purely practical one. Putting them down is the best way to prevent repeat offending and is therefore the best way to protect wider society.
A dog that bites gets put down because it cannot be changed and will always be a danger. Same basic principle.

Yes, it's a thorny subject that has been swept under the carpet for far too long, alas the the carpet is no longer big enough...

As an aside I did try an online search as to why: 'Capital' punishment, given the many uses of the word, but alas an explanation (if there is one) eludes me...

I believe it comes from the Latin word for the head and initially referred to death by beheading.

ntst8 said:
I believe it comes from the Latin word for the head and initially referred to death by beheading.
Click to expand...

That's a capital explanation, with correct use of capital letters, writing this from my bunk here in one of HM Navy's capital warships, before I go and check how much capital I have as we're docking in one of the World's capital cities soon..
(thanks for replying, you can see why I queried, perhaps)

ntst8 said:
I believe it comes from the Latin word for the head and initially referred to death by beheading.
Click to expand...

So not because they were carried out in London then...

Please curb this distasteful post. How many soldiers were court martialed over the centuries for desertion by their leaders for false interpretation of their stated grounds.
How many people have been sentenced to torture and death because of their colour, thoughts or again misinterpretation of
the investigations.
These people cannot be brought back or the wounds healed on
the bereaved.
Be glad you live in a country where you may not be hunted down YET so long as others have no word in the matters.

distasteful to you. that's the whole point. we chose to disagree. that's what a forum is!!!!

Apologies if some comments here appear: 'distasteful' to an outside observer. I almost responded with: 'If thine eye offends thee.. pluck it out' but that would be glib and to little purpose.
Bottom line (for me, at least) is I do wonder if the rest of the world realise that this is a new and alien (and distasteful) phenomenon for the UK, (the scale of events, the ineffectual response and seemingly acquiescent attitude of local authorities and police) and the sense of shock, anger, frustration and outrage that many here feel?
Media coverage is frankly awful too, whilst I don't condone violence from either side, the numbers need questioning: This weekend: six police officers injured, 'over a hundred arrests'.. Last weekend: Over eighty police injured, property vandalised, few (if any, reports show no numbers) arrested.... Why the disparity??
Questions NEED to be asked, it IS a crying shame it has come to these scenes, lockdown frustrates many but there are few if any excuses for what we are witnessing..
Last edited: Jun 14, 2020

My son is an engineer and working from home. He has nightmares because he has a very good idea about what can happen if Covid 19 gets away. He is not even anywhere near an ICU with people dying around him. Some things are psychologically very bad, especially if you have never been anywhere where you could get killed in an instant.
In one of my jobs I was standing over a vat full of nitroglycerine while the nitration was proceeding. Which is OK as long as nothing goes wrong - if it did, you would never know you had ever been here. So Covid 19 does not particularly worry me. My ex did not know what I did at work. And other people do worse.
Last edited: Jun 14, 2020

After getting out of service I took some college courses in the early 70's. Did a research paper on Capital Punishment, I came to the conclusion that the death penalty dose not deter crime but dose cut down on repeat offenders.

rweb said:
After getting out of service I took some college courses in the early 70's. Did a research paper on Capital Punishment, I came to the conclusion that the death penalty dose not deter crime but dose cut down on repeat offenders.
Click to expand...

In Victorian times 90 percent of murderers had witnessed a public execution.