It should indeed. I've already fitted a Hyde 7 plate clutch kit that cost me about £100 not long after I bought the bike. The clutch only has 9,000 miles on it from new and there isn't any wear on the internal spines etc. If I could trial things free of charge such as another 7 plate clutch kit just to make sure that they aren't the issue I would keep trying a bit longer.

Fast Eddie said:
The posts above talk about new Barnet plain plates, maybe give them a try?
Click to expand...

That's not a bad idea. Just out of interest, can you buy them in the UK. I can't seem to find any availability. I know that they are available in the USA.

Fast Eddie said:
And forgive me if this has already been mentioned, but you are using an oil compatible with a wet clutch?
Click to expand...

Yes.
I'm going to try fitting a shim on the taper first to rectify the positioning problem. If I can get this to work, it will be quick and cost pennies. After that I may look at copper coating or hard chroming the taper to achieve the same effect, but that's a bit more fannying about.

Matchless said:
I think you are doing the right thing as at best the Triumph clutch is borderline, & at worst totally inadequate being basically a 650 clutch.
Click to expand...

Yes, that's really why I'm looking at getting the Commando clutch fitted. If I manage it, at least there won't be any clutch slip or other commonly found Triumph clutch problems. Tonight I've found that I can get all of the slack out of the chain (the Commando chain wheel has one less tooth on it) but the chain tensioner has to be near to its maximum limit of tensioning.

It's good to know the chain tension issue is do able. All you need now is a cush drive in the rear hub.

Ref are Barnet plates available in U.K... I don’t know.

If your original clutch only had 9,000 miles on it, why not clean it all up and re-fit that for a free test ?

Fast Eddie said:
If your original clutch only had 9,000 miles on it, why not clean it all up and re-fit that for a free test ?
Click to expand...

Because I've already done that 3 times before, albeit not this year, which is really why I decided to look at this option.
I understand why you've suggested this and appreciate your encouragement, but I've cleaned, re-cleaned, put 650 springs in replaced them with 750 springs, then tightened them up to their maximum and quite frankly have no love left for this clutch.

Matchless said:
All you need now is a cush drive in the rear hub.
Click to expand...

Nooooooooo. Well ok, I may think about it.

Matchless said:
It's good to know the chain tension issue is do able.
Click to expand...

Maybe a new chain would take a bit of slack out as well.
I also rang the chain man about putting a half link in the primary chain. He said that he was unable to do it with the duplex Iwis big pin chain, but had another chain that he stocks available which was not quite as good quality that he was able to fit a half link into. So another possible option.

Hmmm... I feel for yer. I’d be the same I guess. But it still doesn’t nail it though does it? The clutch SHOULD work.

However I can tell yer this... the Triumph clutch actuator mechanism works brilliantly with the Norton clutch (the TTI box uses a Triumph actuator....)

Strange, there are only so many things it could be and you seem to have accounted for all of them. FWIW, I fitted a 7 plate kit from LP Williams a few years back, that in addition to the alloy basket and pressure plate they also sell. I've never had slipping issues, and just running plain ol' castrol 20/50 MC oil. 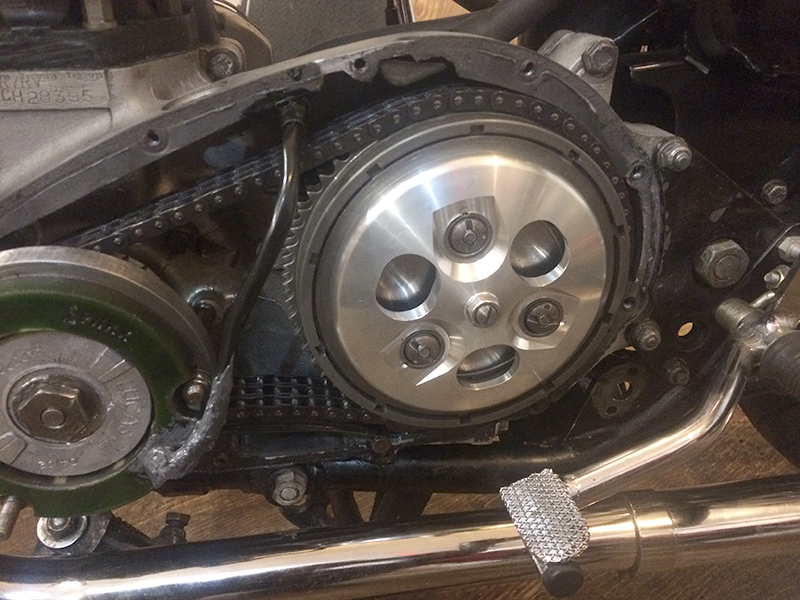 I think half the problem with the Triumph clutch is that in order to make room for the cush drive rubbers they only fitted three springs. Jap clutches of the same era were much better, but I have never seen one with three springs, usually five or six giving a far more even pressure on the plates. I may be talking bollocks of course but Bob Newby clutches don't seem to slip, & guess how many springs they have?

I might be talking bollox too, but I had always put the change from 4 spring to 3 spring down to the fact that the 3 spring is easier to adjust and get the pressure plate true. This makes or breaks a Triumph clutch action and is much more difficult to do with 4 springs.

I’m not defending the Triumph clutch per se, I agree with you that it is borderline, to put it politely. BUT it SHOULD work. Especially with a 7 plate conversion. Double especially on a stock bike that’s not being caned mercilessly...

I believe Emgo cork lined plates are available. Cork is a good clutch material in an oily situation.

The Pre-unit four spring shock absorber spider is not as strong as the three spring and it breaks.

The Pre-unit four spring shock absorber spider is not as strong as the three spring and it breaks.
Click to expand...

You mean Norton 750s produce that much torque that they can break them!

Bernhard said:
You mean Norton 750s produce that much torque that they can break them!
Click to expand...

I haven’t heard of anyone driving a Triumph clutch with a Norton engine.

Getting the clutch to run parallel can be a pain, which is why it's important to have an adjustment tool that serves the two functions needed for the process 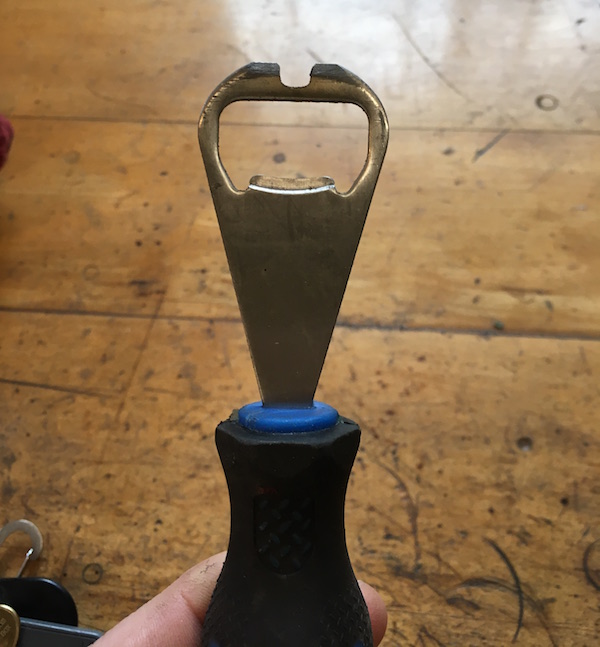 acadian said:
Getting the clutch to run parallel can be a pain, which is why it's important to have an adjustment tool that serves the two functions needed for the process

I agree with that but I've never seen that tool before, it could be a dual purpose tool also used as a bottle opener?

Well I've done it (with a little help from my friends). My T140 now has a Norton clutch!

Using the flawed "Norton clutch centre machined to fit Triumph main shaft" that I discussed in a previous post, what has been done is the chainwheel has been re-positioned relative to the clutch centre by 0.090" by my friend who is an engineer. Simply described, this has been done with some machining on my friends lathe and a spacer that sits between the circlip on the clutch centre and the bearing in the chain wheel. I have also removed the 0.010" crankshaft sprocket shim to reduce the distance that the chainwheel needed moving.

I have given the T140 a run for a few miles (on private land m'lord) and the clutch seems to be working fine. Due to the bike being SORNED (which means that it is not road legal for our non UK residents reading this) I have been unable to get it stonkingly hot with a pillion and ride it up a hill on full throttle to check that there isn't any clutch slip. I'll do that sometime later this year when it is MOT'd.

It has certainly been a dogs arse having to alter stuff to fit. If I were to do it again, I'd get the "Norton clutch centre with a pilot hole" and get the taper cut correctly by an engineer. This also presents it's own problems but they are surmountable.

Nicely done, I hope it fixes the problem. What friction plates have you used?

Esmerela said:
Nicely done, I hope it fixes the problem. What friction plates have you used?
Click to expand...

Hi Kate, I've used 4 Surflex plates. I've used Surflex when my Commando was a 920 without any slipping issues as well. Having said that, I had the thinner pressure plate in the 920, so maybe I had 5 Surflex plates in. I can't remember?

Glad to see you finally got there. When I fitted the Norton clutch/belt drive I bored the pc chaincase threaded bung out to clear the adjuster. Let us know how it stands up to a few miles of abuse

C’mon, get it on the road and tell us how the clutch has worked out. It looks great, we’re dying to know...

I have 3 other bikes in the garage to ride.

Fast Eddie said:
C’mon, get it on the road and tell us how the clutch has worked out. It looks great, we’re dying to know...
Click to expand...