Mines 387lbs. Or it was. Hoping it’ll be closer to 370lbs when nailed back together this time.

In road race configuration, shown here, my featherbed/Commando race bike was (after a lot of work) exactly at 300 lbs dry. 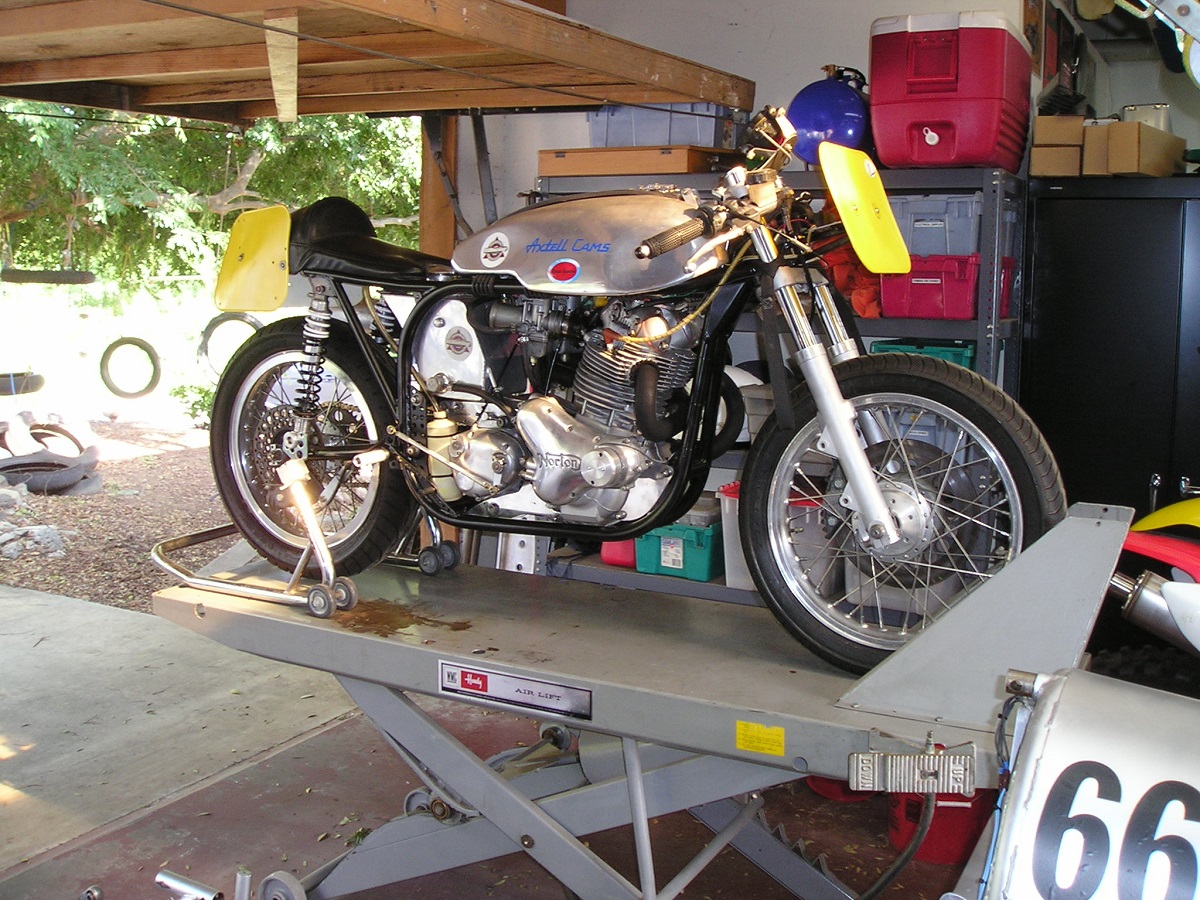 My Featherbed/Commando be around the 300lb weight or really close to it, one day I will get it fully weight and be sure of the real weight with full oil and 1/2 a tank of fuel.
Since building the Featherbed it has lost a lot of weight over 38 years since I convered it.

Without using an alloy barrel, I think 300 is pretty difficult to achieve with a roadgoer, featherbed or Commando framed.

Even Ludwig with all of his other clever and labour intense weight savings tricks just made 302 lbs dry ( chime in if I'm wrong Ludwig) with Alloy barrel.

worntorn said:
Without using an alloy barrel, I think 300 is pretty difficult to achieve with a roadgoer, featherbed or Commando framed.

Even Ludwig with all of his other clever and labour intense weight savings tricks just made 302 lbs dry ( chime in if I'm wrong Ludwig) with Alloy barrel.

True. Besides that, I have replaced a lot of steel with titanium or aluminum to get down to that number. Also, it has belt drive and no alternator, both large weight reductions.

And this one, the ex-Jim Schmidt bike with a 920 Commando iron cylinder engine tipped the scales at 330 lbs ready-to-race. A the 1990 AMA National at Willow Springs we had to clamp a 25 lb. lead brick to the bottom of the front down tubes to make the AMA 350 lb. minimum for the class. Actually, it helped a lot in reducing the front end chatter. 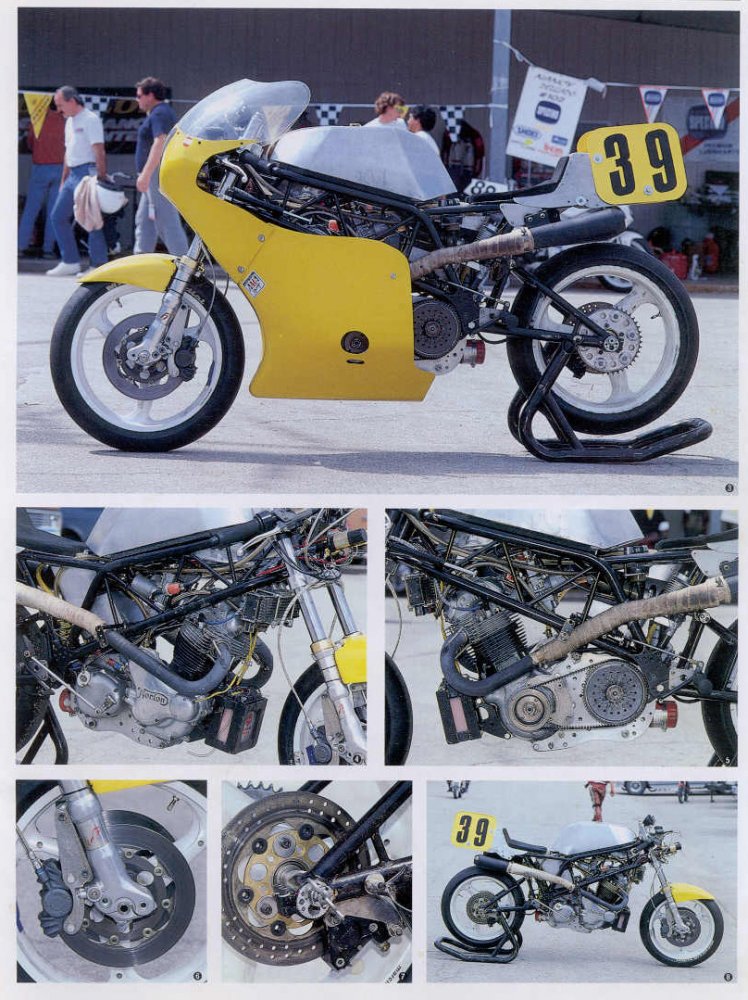 Near stock 650ss with wheels in the air , 408 lbs.
The fuel tank is half full, plus there is the weight of the oil, so book weight of 395 dry is honest.
It has a Newby belt drive which knocks off a bit, but also has an oversized battery at the moment, so it should be about stock weight.

Yes it does and I have been shaving weight off it for over 38 years since building it but I be happy if its close to 300lbs, we can all dream lol, but I am not going to drill holes everywhere to make it even lighter, but at the moment I am happy with its weight.

lcrken said:
True. Besides that, I have replaced a lot of steel with titanium or aluminum to get down to that number. Also, it has belt drive and no alternator, both large weight reductions.

Maney barrels are 11lbs lighter than stock according to my scales, crank is 7lbs lighter, hence my target to be at around 370lbs this time with my 920 build.

I’ve also got lighter yokes, clip ons and mudguards, but slightly heavier shocks (Maxton vs Falcon), gearbox (TTI) and crank cases (Maney). So we’ll see how it all pans out.

FWIW, my 387lbs is a full wet weight (full Roadster tank and oils etc). Not sure what the estimated dry weight would be.

The lightest belt drive has to be the Newby Racing unit.
Aside from having all lightweight components, it does away with the heavy Commando clutch centre.

I have to check my scales.
I just weighed myself on an expensive, but not necessarily accurate bathroom scale -220 lbs

It's a bit like dynos, find the dyno which gives the biggest number and the scale that gives the lowest number, then the male mind will be happy!

Nigel, your bike at 387 wet is approximately 48 lbs lighter than the book weight ( 415 dry, 435+- wet)
You must have removed quite a lot of gear from it, the belt drive with Commando type clutch is probably good for 7 or 8 pounds, alloy rims about 1 pound each, not sure on the fork differences. It still has the heavy iron barrel at the 387 number , correct?

Glen,
The saving you quote is very close to what I’d estimated as I totted up the weight of stuff being thrown away!

Off the top of my head, the savings are due to:
Alloy rims
Alloy rear sets
Maney style pipe (less than half weight of stock set up)
No Z plates and associated detritus (stock z plates and footrests inc all fasteners are very heavy).
Lighter front brake and mudguard
Not stock air filter
Removed stock coils and brackets
No centre stand
Sounds daft but: custom wire harness and Tri Spark removes a surprising amount of weight
No ign key lock
No indicators
Lighter switchgear
Belt drive and Barnet plates
Lighter headlamp brackets
And, of course... a Shorai battery !!

Yes, still have heavy stock barrels and crank, hence am looking forward to the 18lbs saving there!

Currently looking at options to replace the heavy primary case, but not decided on that yet.

As we both know, I’m only playing at it. For real inspiration look to Ludwig’s work.

Thats a lot of weight removed alright.
Do you recall the centre stand weight?

With spring, bushes and bolts, call it 5lbs.

Of course, as the stand is under the engine, the weight saving is counter productive regard low C of G !

I know it’s obvious, but the thing with weight saving is it’s too easy to look at each saving and think ‘yeah but that’s not gonna make any difference’ but if you say that every time you don’t save any weight!

Building a meaningfully lighter bike ain’t easy. I’ll be glad if I can break the 370lbs barrier, but doubt I’ll improve much on that. From then the only chance is lightening the area above the seat...!

The scales are sorted and the hanging scale is right on, the cheap bathroom scale is close and the expensive German bathroom scale reads low by about 5%. Germans eat a lot of meat and they might prefer a scale that reads about 5% low .

I used 44 pound bags of feed to check all of the scales. Feed companies do not want to be accused of cheating the buyer but they don't want to give anything away either.
So they fill exactly what is marked on the sack.
The hanging scale has them right at 44.7 pounds, the .7 being the weight of the plastic sack. Adding bags gave consistent readings of 44.7 lbs per bag added, right up to ten bags at 447 lbs.
The earlier wonky 238 lb for my weight was caused by me jostling around on platform while weighing myself. A more stable platform gave a reading 231, almost the same as the cheap bathroom scale, which is quite accurate. I'm now satisfied that this hanging scale is accurate +- 1 pound.
This is good as I like to weigh things and the transfer station scale charges $15 a pop, plus I don't really know if their expensive scale is as accurate as they claim it is on small weights.

Here is a 1949 Vincent twin, wheels in air. 463.5 lbs with about 1 gallon of gas in the tank.
Vincent advertised the weight of their new twin as "450 lbs dry , a 1000 V twin at the weight of a 500"
Remove the gallon of gas and 5 litres of oil and the 450 figure is good.
450 dry is a pretty decent number for a current model 1000 sport bike. Not bad for a fully suspended 1949 machine built for comfortable touring.
This one has Buchanan Sun alloys, very nice wheels but no lighter than stock.

Interesting to see how accurate the original claim by Vincent was!

That’s quite good considering they are electric start and fitted with a huge Harley Davidson battery etc!

Thruxton R with wheels in air, full tank, fairing and pannier racks, 479 lb.
Triumphs claim of 448 lbs dry also looks right.
My plans for this bike are to remove the cat (-7lbs), remove tubes ( -4 lbs) and perhaps find some lighter silencers. Although I like the look and sound ( straight thru) of these stockers, at 6.3 lb each they are a bit heavy.
It could also use a Shorai battery to shed a few lbs as the charging system produces over 13.1 v at idle.
There's not a huge saving there as Triumph has used an auto decompressor type cam, tiny starter and small conventional battery to get this 1200 running. Could possibly drop 3 lbs with the Li battery, but then I have to put up with sluggish starting at cool temps and other weird Li battery idiosyncrasies.

Glen, those pipes will sound VERY different just by removing the cat. Cats take out a lot of noise. The standard, road legal silencers on my R9T were straight through cos the cat stopped most of the noise !

I'm a bit concerned that it will be too loud.
With the high speed miles I tend to log on this thing, the relative quietude is nice.
Loud bikes are really tiring on a longhaul.
I can always put it back to stock if it's too loud
Claimed Power gains with the x pipe are in the 4 HP range and fall firmly in the camp of " maybe"
Already more than enough power with the cat in place.
Peer pressure made me buy the x pipe!