So I’ve been sorting out an old racer it’s interesting running Grayson cases and about 830cc. I’ve got a 5 speed triumph cluster in a box and could do with some advice on the gearing. I’ll be running a triumph conical rear which I think the lowest I can go down to on the sprocket is 46/45?
I will ride it on the road but want it good for the track. I’m thinking a 22 engine sprocket (Norton crank) 21 gearbox sprocket (cant find a 22 but), standard clutch basket and then go up a bit on the back wheel. Which would then give me easy up or down fine changes?

Has anyone ran a similar set up and can advise me please?

Also thinking of running 2 34mm Mk2 concentrics (have a set of 30’s) any tips on jets would be great.

Thats a lot of fancy numbers !

Wots yer inteded RED LINE . 7.200 was Std. knorton , seeing thats the crank .
A triumph will rev a mite past that .

I suppose its even got mufflers .

Hi Lanks
Stacey Kilworth ran this set up with BHR & CRMC for many years. Fast bike fast rider. He is on facebook.
Also Fast Eddie on these pages ran a big 8 valve T140. He might be able to point you in the right direction.
Chris

Just saw you other querie . Inane speculations await , there .

Need to see some pictures of the machine .

Setting up so you present minimal frontal area , tucked in comfortably , is important , up past ' the Ton ' .

Your gearing depends on the circuit and whether your motor is built to deliver top end power or built to deliver torque. Triumph motors last much longer and go faster if they are built to pull hard rather than gain power by increasing the revs. (do not over-port the cylinder head). If your motor is built to pull, you will not know how fast your bike will go until you raise the overall gearing, but in saying that, you need close ratio gears to get maximum acceleration up through the gears. The close 5 speed Triumph box is pretty good, but there are two pairs of gears available which move 2nd and 3rd gears closer together and up towards 4th. For a small circuit, I would start by running a 24 tooth engine sprocket, 18 tooth on the countershaft, and 38 on the back. But what you use on public roads will probably need to be very different to what you use on the track.

Don't know what all those sprocket numbers add up to, but the 830cc engine suggests some extra power and especially torque, so my experience may not translate. On my 750 5 speed racer, when I used a Triumph spool hub rear, I got two brake drums with integral sprockets, one with 46 teeth, one with 43. With a 20 tooth counter, and a 2 to 1 primary ratio, that gave 4.6 and 4.3 gearing, respectively. The 4.3 was right for Daytona, or maybe Willow, or maybe a few other fast places, Roebling say, and that was about all the gear it would pull, hi 120's mph at 7300 or so at Daytona. But that much gear made first fairly tall and slow off the line with lots of clutch slipping to get going, and also lengthened second perhaps too much and made the gap between second and third noticeable. For most tracks, I used the 4.6 gearing--that gave a shorter first for starts, a shorter but raceable second, and less noticeable gap to third, and let me use third in tighter corners, and was all around faster. The bike spends only a second or two or three at most tracks at peak revs in top, so the benefit of tall gearing is limited, but it sure went around the track quicker with the gearing shortened to 4.6--and I think the game is lap times, not top speed, most places. Don't know what sort of engine you have, but your optimal gearing may be different than 4.6 with all that displacement, you will have to try your gearing out to find an optimum. The trouble with this whole stock parts setup was, it was very heavy, and difficult and slow to change, and did not offer ready options. Simply put, it was a whole bunch of cast iron on a race bike.

Not that you care about this part, but then I got rid of all those heavy and limiting stock parts, put Newby belt drive and a Barnes dirt track quick change hub on the rear, with narrower 520 aluminum sprockets and lighter 520 chain, and with the different Newby primary ratio, I was able to use smaller, lighter sprockets both ends--18-38 for 4.3 gearing if I remember correctly-- and as a bonus I could shorten the chain several links, and with these changes I lost more than 10 pounds of weight in the rotating drive train and got far more gearing adjustability, changeable easily and quickly in the pits. I still didn't vary greatly from 4.3 to 4.6 gearing, but moved around in between more. For what it is worth.
Last edited: Apr 17, 2020

For about ten years, I raced my 500cc short stroke Triton against one of my mates who has a T120 650cc Triton. It has the only pre-unit Triumph 650 engine in Victoria, which was raced in the 1950s which has never blown up. His bike is extremely fast. I once rode it and blew-off a good H2 Kawasaki two-stroke on the front straight at Calder Raceway. He never revs it over 6,500 RPM. It has standard size inlet ports and he runs very high gearing. He has tried a lot of different cams, and found the best are still the E3134 with the R type followers
Last edited: Apr 15, 2022

acotrel said:
For about ten years, I raced my 500cc short stroke Triton against one of my mates who has a T120 650cc Triton. It has the only pre-unit Triumph 650 engine in Victoria, which was raced in the 1950s which has never blown up. His bike is extremely fast. I once rode it and blew-off a good H2 Kawasaki two-stroke on the front straight at Calder Raceway. He never revs it over 6,500 RPM. It has standard size inlet ports and he runs very high gearing. He has tried a lot of different cams, and found the best are still the E3134 with the R type followers
Click to expand...

Just noticed your post. I have photos of my own bike but not my mates, I will post after 8 Novrmbrr

For Bathurst, the engine sprocket on a 650 Triumph would be 25 tooth. The way to make a 650 Triumph go without blowing up is to have small inlet ports and make the motor pull rather than rev. 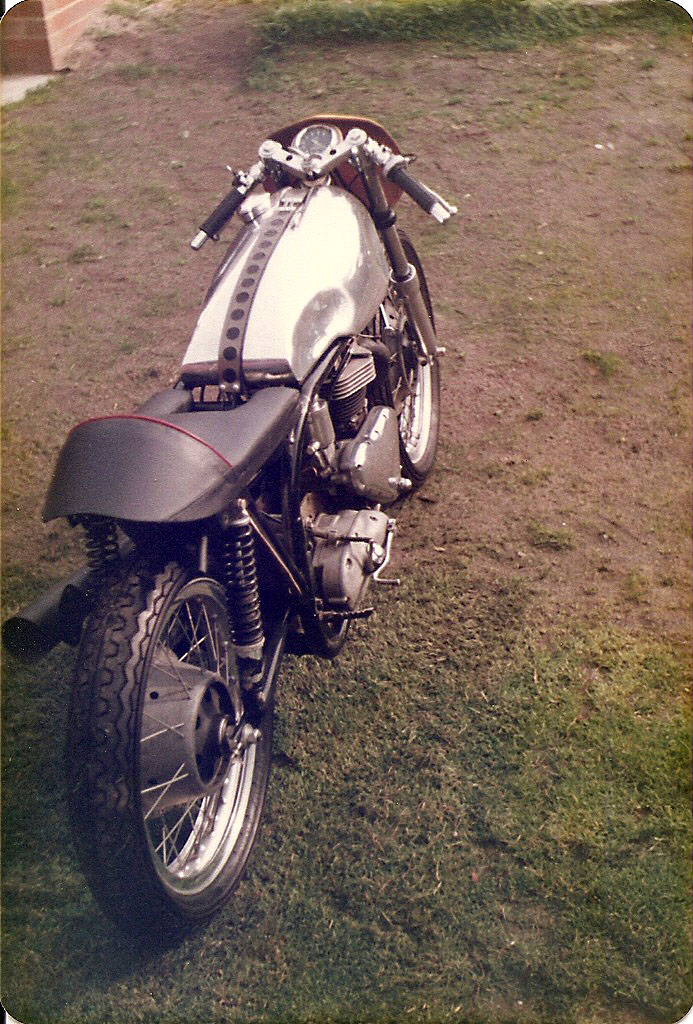 And who obeyed factory redlines . Not many 70's youths . 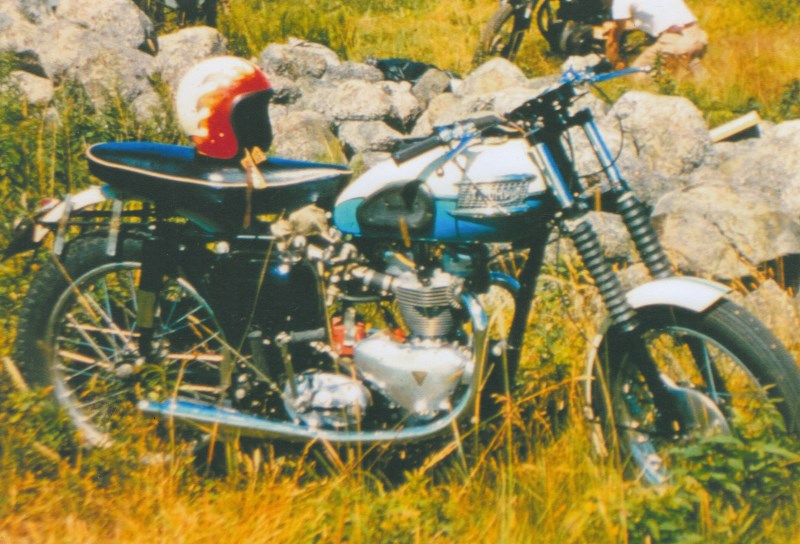 In the fall of 1956, Triumph built in their competition shop 144 T100R engines with 9 to 1 pistons, 3134 cams with R followers, dual carb Delta head with rubber tube mounted 1” GP carbs with large remote floatbowl, racing magneto, and old pattern tach drive. When an order came in for either a road racer (T100RS) or a flat tracker (T100RR) the engines were built into swingarm or rigid frames with appropriate exhaust, oil and fuel tanks, wheels and brakes, fenders, seats and gearbox. Triumph built 78 T100RR and 66 T100RS bikes.

This bike was ordered in December 1956 by Colquhoun Motorcycles, Halifax, NS, and built January 17th and left the factory February 1st. It was sold to Mr. Mike Chu at Shearwater Naval Air Base and he raced it at the first Atlantic Road Races at Scoudouc airport in NB. Four other T100Rs were delivered to Canada of which at least two more were T100RS road racers. One was raced by Mr. Don Haddow to win the 1957 expert championship at Harewood, ON.
Click to expand... 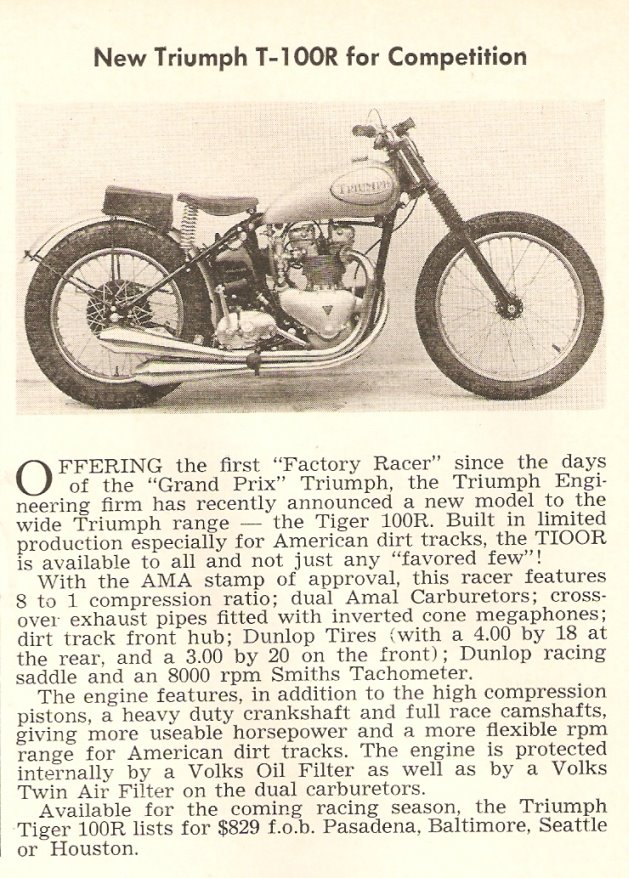 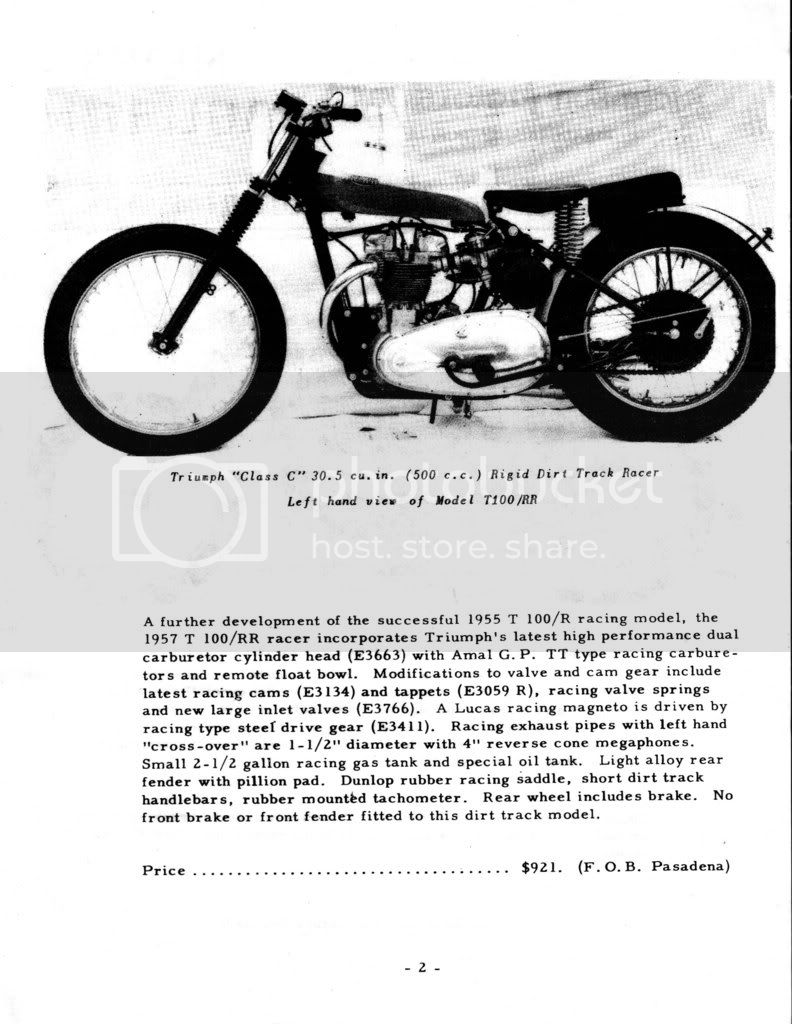 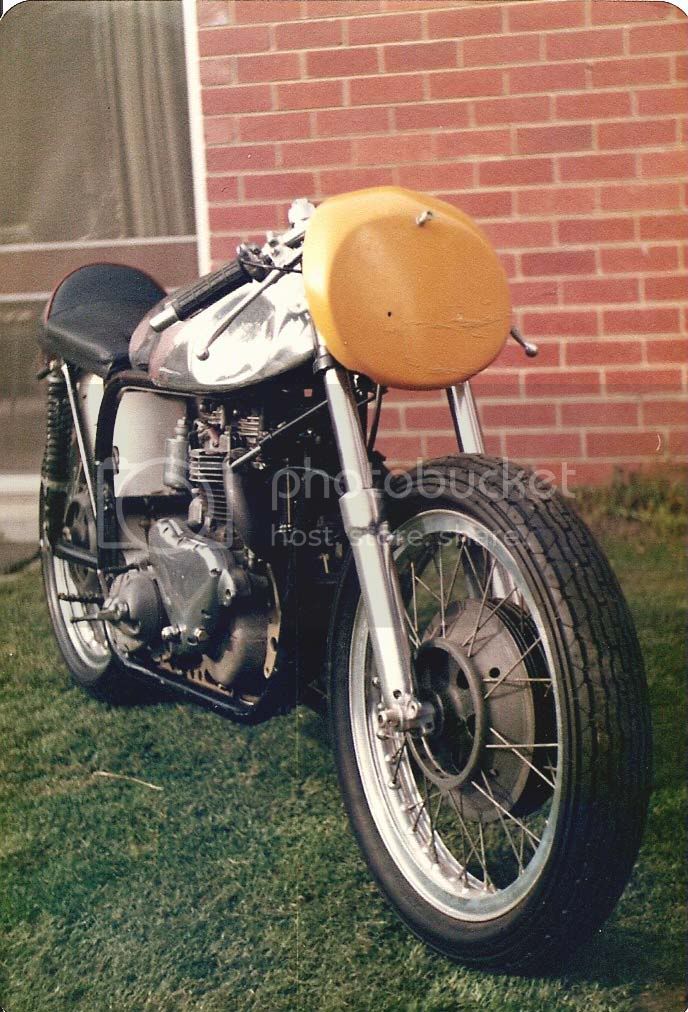 The valve gear in a Triumph twin can run at 10,500 RPM if it is lightened and the cam has less lift, longer timings and a slower lift rate. With a 650 motor, other things usually fail before you reach those revs. My 500cc Triton was a short stroked 650 - 63mm. It was fast, but nasty to ride - just a pain in the backside. Its only advantage, was it was indestructible.
You must log in or register to reply here.
Share:
Facebook Reddit Pinterest Tumblr WhatsApp Email Share Link