Been redoing a head and found a couple of handy tips when removing and reinstalling the rocker spindles.
Use a slide hammer to remove the spindles. The one that removes the auto-advance unit also fits the tappet spindles.
Either heat the entire head or use local heat from a MAP torch on the bosses to make the spindle slide out easier.
Put the spindles in the freezer before reinstalling.
install the plain washer first with a bit of grease, then rocker arm, then thackery washer on the inside.
Use a 1/2" diameter bolt to get everything aligned.
Either heat the entire head or use spot heat again.
Tap the spindle in with the flats facing out from the center of the head. Front flats facing front of bike, rear flats to rear of bike.
Leave about 1/4 inch of the spindle sticking out, you should still be able to turn it with a screw driver at this point, if not pull it out a little more.
Install the inner tappet cover plate with the ears loosely. I use the studs from the front rocker covers. Line the spindle up so the ears match the slot in the spindle.
Now with a punch on the cover plate drive the spindle the rest of the way home. It should be either flush or slightly recessed. Using the cover plate to drive it home keeps the spindle from rotating out of position.
Last edited: Aug 5, 2020

htown16 said:
The one that removes the auto-advance unit also fits the tappet spindles.
Click to expand...

Only the aftermarket ?? HARRIS rockers??(LAB will know) have 5/16-22 BSF
I have only one set of the aftermarket ones and dozens of scrolled and plain with flat and all are CEI threads
Last edited: Aug 5, 2020

I'll have to check my puller. I think it has different threads on each end of the pull rod. I've used it without problems several times.

I have two slide hammers both have different threads on either end.

If memory serves me right, one is from Andover and the other is from RGM

Checked mine, one side is 5/16" Unf (24 tpi). I don't have a cei thread gauge but a 5/16 cei nut threads on the other side easily and it also threads easily into the spindles so I am assuming it is 26 tpi cei. It looks like this below. Good point to bring up. Don't force the wrong end in.

One end is threaded for 24 tpi and the other for 26 tpi so it fits both early and late bikes. Made in Ohio, USA.
www.ebay.com 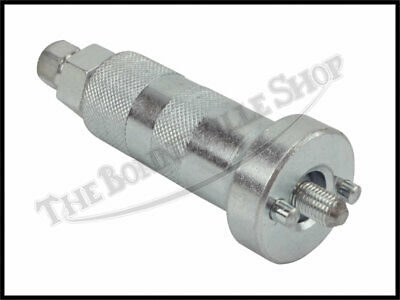 You didn't mention what head you were working on. I've done quite a few RH4 and RH10. (850) They were 5/16" x 26 tpi. I bought an axle for a British bicycle from Ebay, same thread size. Chopped off an end and welded it to an old 3lb. dent puller I had laying around. Pulls them out like a bad tooth. Painless.

Rocker spindles were 26tpi Cycle Thread right from the first Dommies all the way through to the last Commandos.

The only exception was after market ones sold by Les Harris from Devon, England.
They were 22tpi BSF as pointed out by @dynodave

I think I found the threaded gearbox adjuster was the same thread. Luckily my 750 was in bits at the time. My rocker spindles seamed really easy to pull out by hand. Was helpful when I was getting my head on as I found one pushrod had dislodged.

Ideally the shafts should be tight in the head. They shouldn't be easy to remove cold. Always use heat to remove them or they will become loose.