I am looking for information on the Ranger dual seat. In some pictures it appears to have a chrome strip around its lower edge, but all of the versions of it I can find for sale are missing this strip. Is this seat specific to the Ranger, or is it also common to other Norton models and just the mounting arrangement varies? Any comments on the quality and fit of reproduction versions that are available would also be useful.

Hi Norm, Welcome to the P11 forum, I dont know anything about a Ranger seat, but i can post a photo of this special model for reference. I would say it has a chrome strip and a hand grab strap. What research have you done on this? Can you post any links or pictures?

The Ranger 750 seat is based on the seat pan of the Norton N15CS but with a crude,funky bracket added on to attach the seat to the top shock mounting bolts. The original seat does indeed have the chrome edging, similar to the Commando seats. This seat slips over a single peg on the frame just after the fuel tank and fastens by the aforementioned bracket to the top shock bolts.

This seat is completely different from the P11A dual seat, which is an extended version of the single seat of the early P11. The P11A seat has a "tongue" that fits under the fuel tank and two studs at the rear of the seat bolt through the rear fender mounting strap.

That plastic chrome edging is available from your Norton/Triumph parts guy. As Ron stated, it is the G15/N15 pan with a few minor mods to fit the P11 frame. The cover is the same as the late '67/68 G15/N15 (earlier versions had white piping around the top edge of the seat)

Any detail photos of an original Ranger seat?
here is a photo found online, is it correct P11 Ranger seat? - 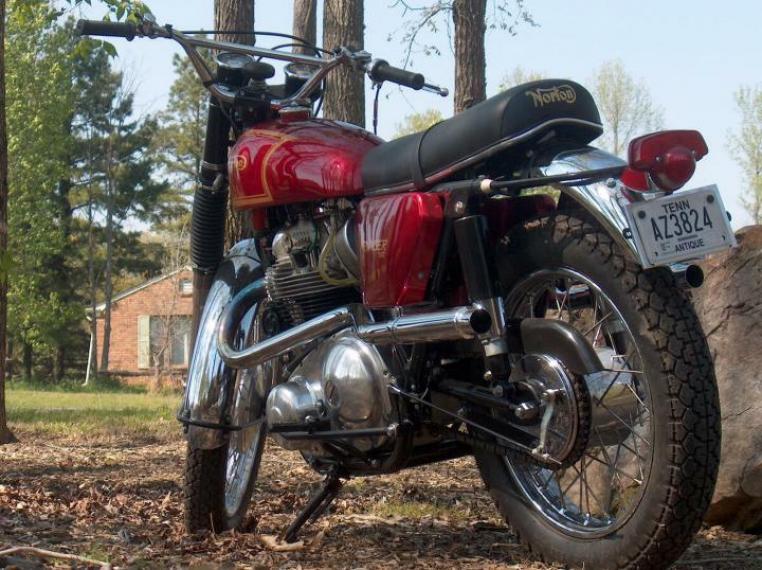 I think you will find several sources just Google searching Norton P11 Ranger dual seat.
It would be nice if anyone would post a picture of an original seat bottom .
Difficult to understand how this seat ties into a Matchless chassis.
Looks like the sheet structure is cut out at the rear which limits support for passenger.
Is this cut out for fender clearance for another use of this seat? 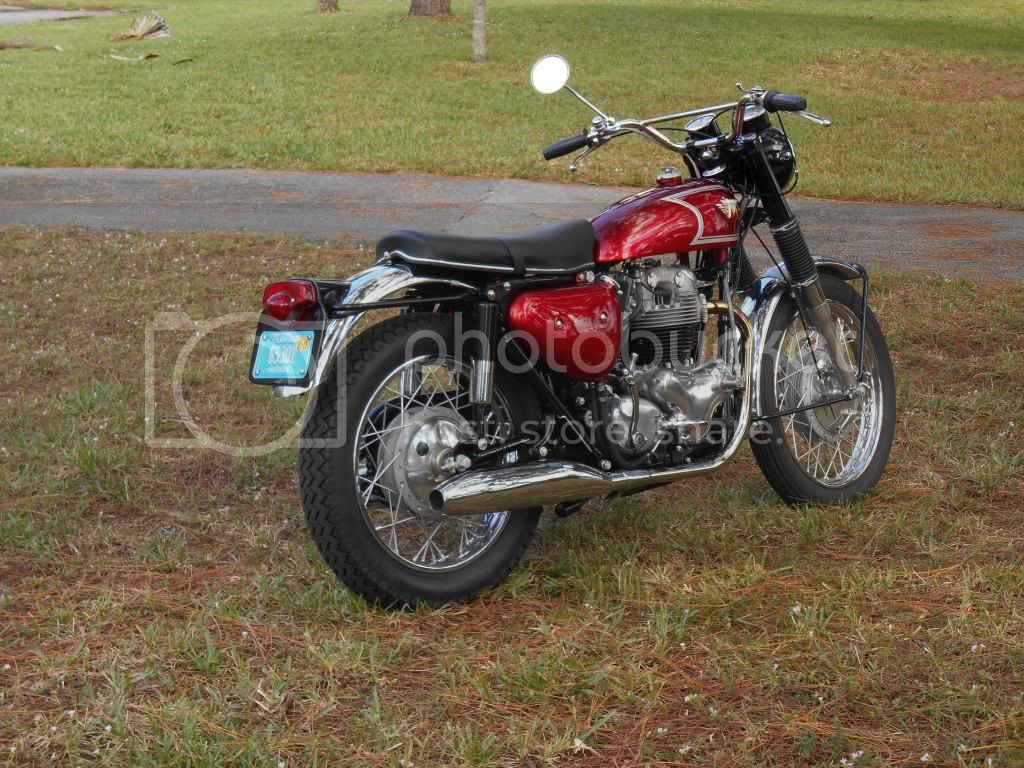 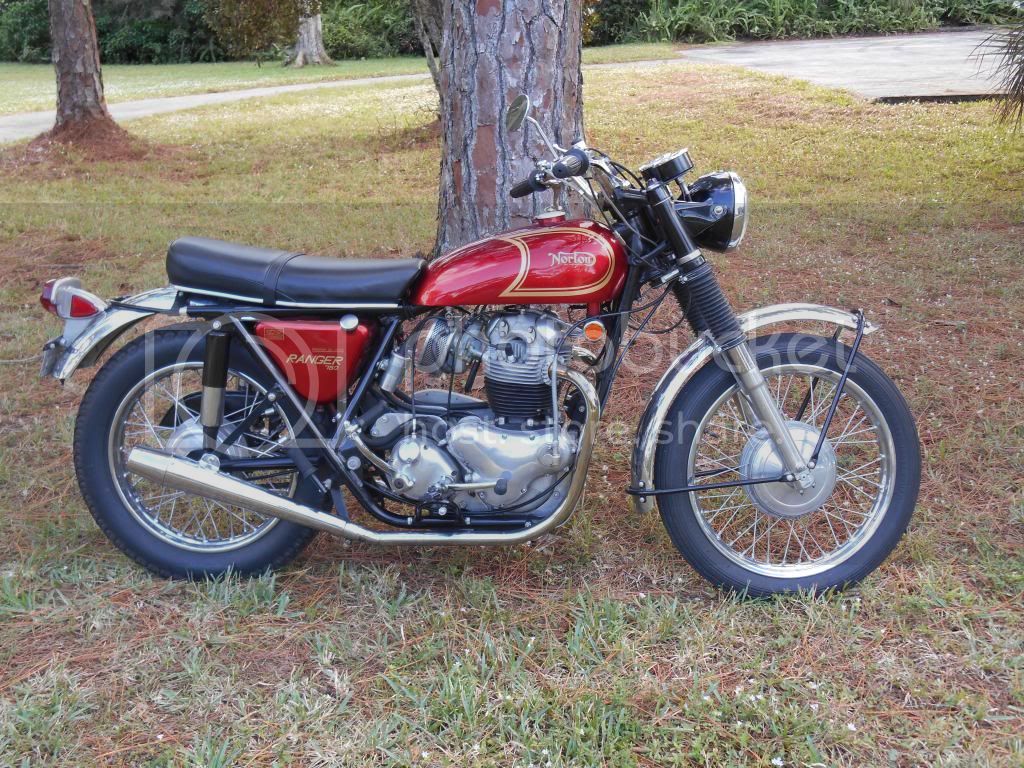 The G15 seat pan and pad are original to the bike, with a new Leighton cover I installed (came with chrome strip in the box). The cover is an exact copy of the cover I removed in cut, but very slightly different in texture. The seat has two slotted tabs at the front spot welded to the pan, which fit over the large stud joining the rear subframe to the main frame, and then is held in place by a 9/16W nut on each side. The rear has a roughly 1" x 3" tab welded on the back, which bolts to the fender with a 5/16 bolt and acorn nut. These three points support the seat, along with the two welded spacers, which rest on the frame
The Ranger seat is a reproduction, as sold by Walridge and is shown in P400s pic. The cover is not quite right, but close. It did not come with the chrome trim - I got that from my local guy, Wes Scott, for about $8. The little Z-bracket shown in this pic is useless. I fabricated a collar - like a wiring harness clamp - out of metal and bolted it to the existing stud on the pan. This slides onto the 'L' shaped pin on the frame, the back end of which is just visible in the pic below just in front of the oil tank. 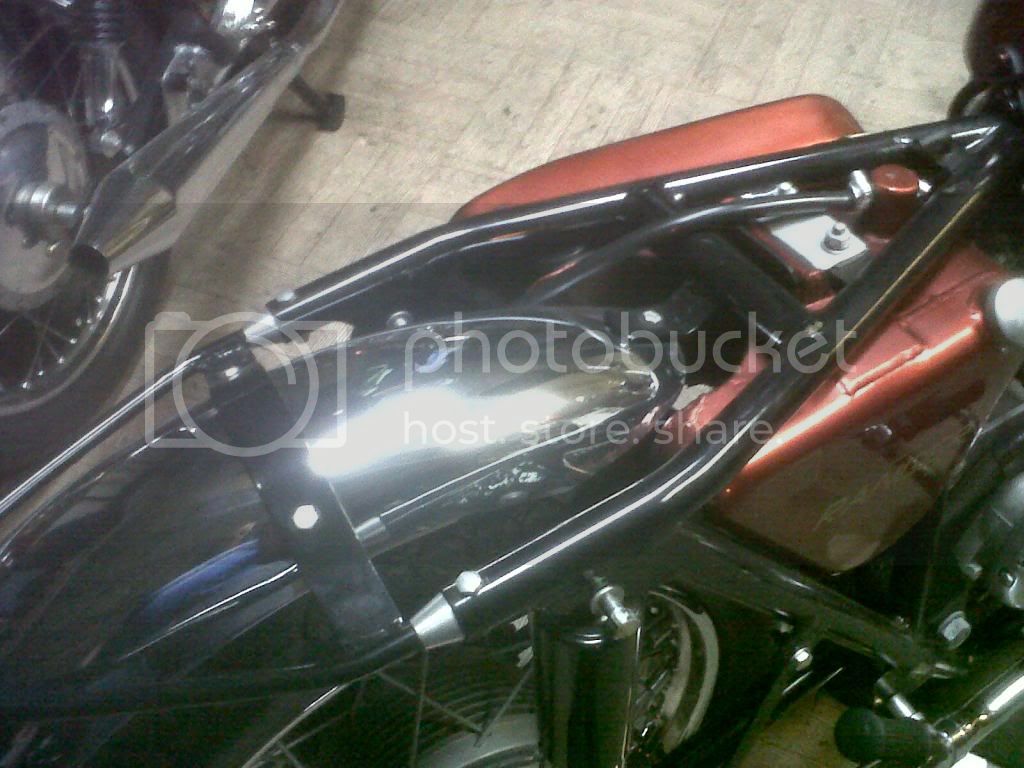 I slid a piece of rubber hose over this pin for a tight, quiet fit.
The two bolt holes shown in P400s pic are for the brackets that support the rear of the seat. There should be two slotted 'L' shaped brackets, but I made a single 'U'-shaped bracket. The rear brackets (or bracket) fit over the shock mount bolts and are locked in place by the nuts. like the G15, the Ranger seat is secured at three points, and the two spacers also rest on the frame

Yes, the pan is notched to clear the fender, and you can see the rear of the seat is arced to match the curve of the fender

Thanks Bill, I imagine your rear Ranger seat bracket U to look like this ?
Maybe the front bracket you use is a "P" clamp style?

Thanks Again for more useful information and pictures.

I have some images of what I have been told is an original Ranger 750 seat and attachment brackets. I'd be glad to post them, as they are a bit different from those already shown. Being a newbie here, however, I am not sure of the procedure for posting images. If someone could enlighten me, I will post them.

That's the word I was looking for!

Yes, the U bracket is similar to what I made from 1/8" flat stock.

The underside of my '69 ranger's seat-


Yes, it has the trim, I believe it to be original.

That looks like an original seat, GP. I don't know about the plate held in place by the same bolts that hold the 'U' bracket in place, but it looks right. The cut of the cover is correct for a Ranger, too - same as a late N15/G15

I recently got an original '61 G80CS. The seat pan is the same. Front brackets are the same as the G15 (nearly identical frame), rear of seat is held in place by a pair of studs through the pan and bolted through a section of gusseted fender.

Hi All,
I am going to attempt to post some images showing what I believe is the OEM method of attaching a Ranger 750 seat to the frame.

All 3 links show the same thing.

Mine has the front pin welded to the frame as in the photos.

Bill, I think that pan may have been bolted to the original seat pan to cover a rusty, deteriorating mess. I haven't removed it for a look...

Did Corbin ever try to make a seat for the P11?
Now I would like to see that.
but this is off topic slightly.
Tom
CNN

grandpaul said:
Mine has the front pin welded to the frame as in the photos.

Bill, I think that pan may have been bolted to the original seat pan to cover a rusty, deteriorating mess. I haven't removed it for a look...
Click to expand...

Paul, the bottom of my Ranger seat is identical to yours. It has the odd looking pan under the bracket as well. I'm not sure what purpose that served.

CanukNortonNut said:
Did Corbin ever try to make a seat for the P11?
Now I would like to see that.
but this is off topic slightly.
Tom
CNN
Click to expand...

I doubt they did, Tom. 3 different seats, each with different sizes and mounting methods, and what was essentially a scrambler. I wouldn't be surprised if the Ranger seat was just a way to get rid of a bunch of extra Matchless seats - the Ranger pan is the same as a late (G3/G80/G15)CS pan, with different mounts.

Ron L said:
Paul, the bottom of my Ranger seat is identical to yours. It has the odd looking pan under the bracket as well. I'm not sure what purpose that served.
Click to expand...

Other than the rear fender bracket and coil bracket that I made, the patches to the mufflers, and a previous owner's re-spray, I believe my bike to be 100% original.

Well, that's a bummer. I wish I could get some advice on how to correctly post pictures.

To wrap up this thread, I 'd like to provide some additional information I received from Mike Partridge. Walridge Motors carries the seat (BS46B), the chrome strip (60-696) and the front rubber grommet (06-7790). I also learned that he rear bracket may be obtained from Bill Giar at 513-528-6023, Cincinnati.