Sam ,get well soon you both,
Having had dengue fever before ,I know what high temps and shaking is all about.
Lost my sense of taste as well for months afterwards.
All the best.

The worst infections I've had were a bout of pneumonia about ten yrs ago after being hypothermic at a sail boat racing event in Florida. Most days at event were well over 28 C, then one day we had storms and heavy rain while out on water, only the pro teams had proper protective clothing handed over from their support boats. I recall not being able to sail the boat properely as concentration began to go. It was the wind chill that did it. Anyways, four days later, after 55 hrs cross country driving, I came down with shivers and high fever. Got on antibiotics for two weeks, bed ridden for nearly two months. Lost about 20 lbs in first two weeks.

Other infection of mention, the week I got my Commando I had come down with Shingles. Helluva thing. Clothing, moving, sleeping all extremely painful for more than a month. Get the vaccine for Shingles! Trust me on this, you do not want that beastie activating in your nerve tracks.

blaisestation said:
Sam ,get well soon you both,
Having had dengue fever before ,I know what high temps and shaking is all about.
Lost my sense of taste as well for months afterwards.
All the best.
Click to expand...

In 89 I was living in a warehouse loft in downtown New Orleans with a couple people, working in restaurants. In July in the heat of summer I caught what I think was Dengue and spent a week in bed with fever, chills, hallucinating and could barely keep down Sprite.

Went back to Seattle a few weeks later and right into a road trip to the Sierras to pick up a motorcycle for.my brother when I noticed first symptoms of Type 1 diabetes.

According to the American Academy of Pediatrics, more than 250,000 pediatric cases of the virus were reported between August 26 and September 2nd, the most recent period for which there is data. That’s a pandemic high. Child cases represented over a quarter of all COVID-19 infections diagnosed during that seven-day period.

The weekly figure now stands nearly 300 times higher than it was in June, when just 8,400 pediatric cases were reported over the span of a week.

The South now accounts for more than half of all new pediatric infections, according to data released by the Centers for Disease Control and Prevention.

In a similar trend, the rate of pediatric hospital admissions per 100,000 people is also at one of its highest points of the pandemic, up by 600% since the Fourth of July, according to federal data. The admission rate is also nearly 308% higher than it was a year ago.

And on a somewhat lighter note, a new Lincoln Project video

gortnipper said:
And on a somewhat lighter note, a new Lincoln Project video

On a more serious note regarding Ivermectin

KiwiShane said:
On a more serious note regarding Ivermectin

Jeeze - you must be a blast at parties!

Ivermectin is the adult tide pod

Had to do a bit of Googling, but I got there in the end !

Still only got 3G after 2 x Ph.
But 4th gear works better on the Manx. Might a booster help 5th gear to go in?

Latest from the Office for National Statistics here in the U.K…

Which means that 99.5% had NOT been double jabbed.

That would seem favourable to the vaccinations I feel.

And although it’s been a sliding scale from Jan to date, we are now in a position where 81% of adults (defined as over 16years) have been double jabbed.

So, we have an 81% double jab rate, and a 0.5% death rate within the double jabbed. Think about that, even if the jabs did nothing we’d expect to see 81% of deaths occurring in the jabbed population. If the jabs are ‘dangerous killer clot shots’ we’d see massive cases of clots, but as demonstrated in an earlier post, we simply are not seeing this.

Frankly, it’s difficult to imagine real world data that could be more favourable to the jabs than this.

As I’ve argued before, whilst the jabs aren’t perfect, I just cannot understand how anyone can think we would have been better off without them given statistics like this.

robs ss said:
Jeeze - you must be a blast at parties!
Click to expand...

Your reliance and conviction on the clot shots..which i may add ARE FAILING RAPIDLY .....Good luck and I wish you all well.
Keep your Trust in the MSM and your Governments and their so called government health experts that recieve massive financial support from the clot shot companies committed to the gene therapy experiment of which you and others are clearly are part of....
The Lincoln Project is a great source of factual information (For brain dead people that have committed them selves to the clot shots)
Goodness knows how many you will need to KEEP TAKING .....rest assured though Pfizer have tablets coming out for you all soon.

Fast Eddie said:
Latest from the Office for National Statistics here in the U.K…

Which means that 99.5% had NOT been double jabbed.

That would seem favourable to the vaccinations I feel.

And although it’s been a sliding scale from Jan to date, we are now in a position where 81% of adults (defined as over 16years) have been double jabbed.

As I’ve argued before, whilst the jabs aren’t perfect, I just cannot understand how anyone can think we would have been better off without them given statistics like this.

From a reprint of an article that appeared in Scientific American.

New research suggests that events happening worldwide are nurturing underlying emotions that make people more willing to believe in conspiracies. Experiments have revealed that feelings of anxiety make people think more conspiratorially. Such feelings, along with a sense of disenfranchisement, currently grip many Americans, according to surveys. In such situations, a conspiracy theory can provide comfort by identifying a convenient scapegoat and thereby making the world seem more straightforward and controllable. “People can assume that if these bad guys weren’t there, then everything would be fine,” Lewandowsky says. “Whereas if you don’t believe in a conspiracy theory, then you just have to say terrible things happen randomly.”

While humans seek solace in conspiracy theories, however, they rarely find it… For one thing, conspiratorial thinking can incite individuals to behave in a way that increases their sense of powerlessness, making them feel even worse. A 2014 study co-authored by Jolley found that people who are presented with conspiracy theories about climate change—scientists are just chasing grant money, for instance—are less likely to plan to vote, whereas a 2017 study reported that believing in work-related conspiracies—such as the idea that managers make decisions to protect their own interests—causes individuals to feel less committed to their job. “It can snowball and become a pretty vicious, nasty cycle of inaction and negative behavior,”

A vicious cycle. Protect yourself. Get off the treadmill. 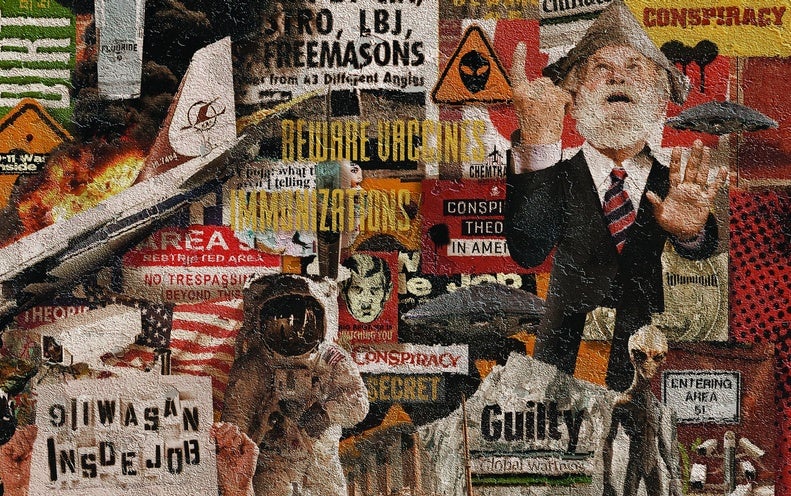 Baseless theories threaten our safety and democracy. It turns out that specific emotions make people prone to such thinking

This all reminds me of the lyrics from a Clash song,
Back in the garage with my bullshit detector !

Not aimed at your last post Mr Nipper.
B)