Looking for a picture or description of the correct hardware of the rear brake pedal mount.
It looks like my pedal has hit my primary cover near the stator area.

Mine has not been messed with (looks about as sophisticated as a 1967 desert bike would), but the only thing keeping the brake lever in a reasonable position is my foot peg when it is down with my foot on the foot peg. You might have to come up with a spacer that goes between the primary cover and foot peg hardware to get the foot peg in a position that prevents the brake lever from coming up as far as the stator hump on the primary cover.

I'll look at mine tomorrow. I did add a piece of vinyl hose held on with a ziptie to prevent the bottom of the foot peg hardware from putting a big dent in my brake lever bar. I'm not a restorer though, so grain of salt goes with anything I've done.

Big nut spacer for foot peg mount. Gonna change that nut to a aluminum spacer when I pull the primary cover off to replace my crank seal and reseal the cover with hylomar and a modern gasket. If you look closely you can see a small mark where the pedal pad hit the primary cover at some point. Probably when the bike was laid over sliding off HWY 9 in the late 70's. Stuff happens.

The stock lever mount on the frame. Not sure this image is of much help though. Kind of a weird angle.

Replaced my bent up oem pedal with a new unit from Eurotrash. My oem bent pedal, was too fragile to repair due to past repairs, and was causing me to lift my foot off the peg to operate. So I saw this pedal on eBay, but the eBay listing would not allow me to order, so I went to Eurotrash website...

This looks a bit different than my arrangement.

I would like to find a source for this safety spring.

Mine does not have that Steve McQueen special spring set up (I understand that is a joke) or the brake switch mount on the frame, but the bike was a disassembled flat tracker before I got it, so the switch mount could have been ground off. My brake switch is on the front brake lever (Magura levers). Schwany special.

That spring reminds me of the return spring for a kick starter or a spring used on some of the foot pegs used on modern motorcycles. Anyway I know I've seen similar. Good luck finding one
Last edited: May 21, 2020 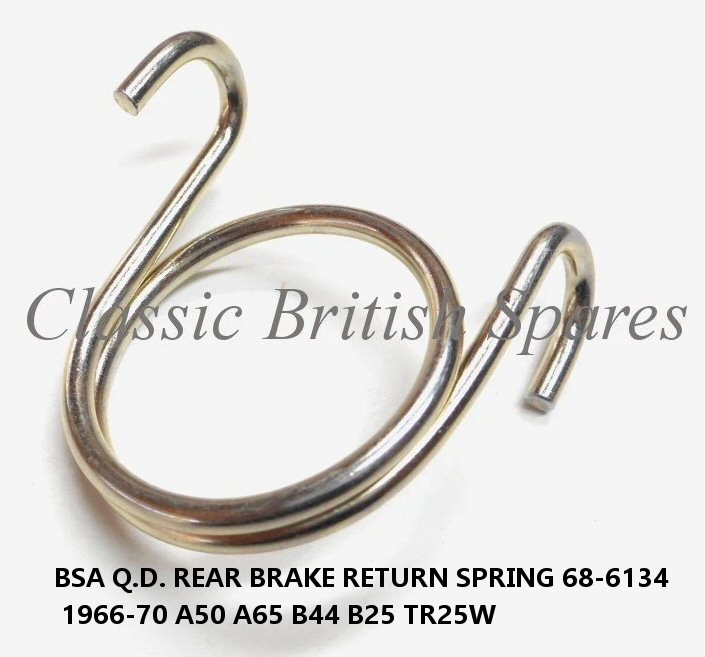