I stumbled upon this while look for Norton flat track info. In the thread on ADVrider, there was some discussion about using a modified Commando frame. Basically, a rigid mounted engine, would damage the frame under racing conditions. Anyone have thoughts?
http://www.flickr.com/photos/33041406@N07/3904594358/

Rob94010 said:
I stumbled upon this while look for Norton flat track info. In the thread on ADVrider, there was some discussion about using a modified Commando frame. Basically, a rigid mounted engine, would damage the frame under racing conditions. Anyone have thoughts?
http://www.flickr.com/photos/33041406@N07/3904594358/
Click to expand... 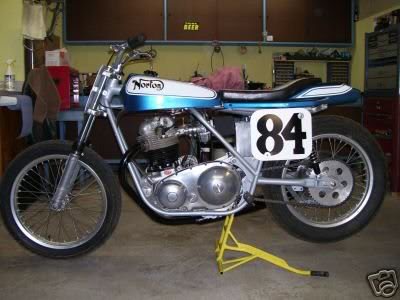 I wouldn't use a stock frame, unless heavily modified, and even then it would be better to use a dirt track specific frame like Trackmaster, et al.

Without the Isolastics, that fram wouldn't survive more than a few hours. I did a lot of the structural tests on it, and though strong, it was vibration fatigue sensitive. Lateral bending strngth in flat tracke use would also have been very hard on the frame.

It looks like an answer to a question nobody asked. If, God forbid, you wanted to flat track a Norton engine, why not install it in a flat track frame?

I agree, a specific frame would be the wise choice. However, how did the Atlas' and P11 survive? Are their frames stronger/tougher than a Commando frame?

The Atlas was no good off road since it broke. That had the G15 that worked well, I had a G15 CSR and it used the same frame which was a tank, too heavy though. The P11 used the lightweight Matchless frame and I've never heard of the frame breaking. They sure trashed oil tanks though.

I read through some of the development of the NYCNorton racer. After repairing his featherbed frame many times, he slurged on a purpose built frame. I don't think he has broken the frame since. What year featherbed are you using?

Rob94010 said:
I agree, a specific frame would be the wise choice. However, how did the Atlas' and P11 survive? Are their frames stronger/tougher than a Commando frame?
Click to expand...

Much tougher, in that they were designed to take the vibration that the Commando frame didn't.

He's going to race in Europe next...

Hmmmmm, he hasn't mentioned it on the racing forum; probably too busy to post! What did he break? I assume it's fixed by now...

hi gp,i got the info off his website,i look for updates regularly as im really interested in his racing exploits,it was the rear crosstube where the engine plates mount that cracked,i beleive hes somewhere in europe now,just a shame he did,nt do a few meetings in the uk,im looking forward to hearing his latest exploits

The Commando frame was MUCH stiffer in torsion than either the Featherbed or the P-11 and was designed primarily to keep the front wheel and back wheel in the same plane regardless of side loads. That monster top tube was a major part of the concept.

It was not as stiff in the bending plane, but still quite a bit stiffer than the older technology. When we transferred the design concept to the AJS Stormer, we started to see the limitations of the Commando concept in anything other than street use. The early Stormers (including the factory M-X team bikes) had the top tube welded to the headstock down towards the bottom, with a stiffening gusset wrapped round the top tube and welded to the headstock almost all the way to the top. We had several frame failures where the gusset finished, about 4" back from the steering head.

I did some brittle lacquer testing, putting loads in with a hydraulic actuator to simulate the loads from the front suspension. It was immediately obvious that the transition from the gusset to the round tube was a big stress raiser, and that's where the cracks showed up. Eventually, the design morphed into the one that Bombardier (I think) bought the design rights for. It consisted of two semi-circular sections with a full length triangular insert welded in. The cross-section was circular at the seat loop end and obround at the headstock. It didn't go into production until after I left, and I think the factory M-X program died shortly afterwards.

The reason the Featherbed and the adapted Matchless frame of the P-11 don't break very often is that they're a lot more flexible in response to shock loads. Im' sure the Reynolds enthusiasts will forgive the remark, but one of our techs said "they're welded up from old gas pipe".

I also did some "high-speed" (64 frames/sec on Super-8 film) movies of the Stormer team bikes at one meeting and compared their handling over the sharp bumps with the handling of other, more conventional bikes (MZ and Bultaco in particular). The Stormer could be a real kick in the butt, quite literally. You could see there was almost no flex in the frame when you came off a jump and the shocks couldn't handle the load. There was one series of frames where the back end kicked up so hard, I'm surprised Malcolm Davies wasn't singing soprano for a week. We were testing different shock ideas and one mechanic got quite nasty burns on his hand when removing one from a bike that had been out on the circuit for a few practice laps. Because of the stiff frame, the shocks were getting hot enough to burn the paint off.

If I can find that film, I'll see about posting a piece of it. I'll also have a go at some sketches of the frame details I mentioned.

In an old bike mag I found an article a while back that said that Stormer production carried on in a small way in England. I'm not sure how long it lasted but one place was making about four a week.

it was Fluff Brown that kept the Stormer going. I found this in Wikipedia.

I think N-V carried on with the Stormer for a while after they moved to Andover, and it would have been at a low production rate. The Stormer didn't set the world on fire! With the lubrication problems on the Starmaker engine (still in development when I left) it wasn't suitable for the consumer street/trail market.

The reason I mentioned Bombardier is that I saw a bike a few years after I moved to the US, I think a KTM, and it had the very distinctive eccentric swing-arm bushings that N-V developed on the Stormer. They were used for taking up slack in the chain without losing the alignment. I couldn't tell if the frame was like the final version that I worked with, as the KTM tank hid the evidence.

At least it's good that some of the better ideas carried on. I've also heard rumor that the Stormer frame was copied but I don't know by who.

Viewing the photo at the start of this it apears to be a pre commando 750, with the tilted engine and primary case it may well have started as a p11. Having previously owned several Atlas's a g15 and a p11 i have fond memories for that bike as a fun bike to own.
Al

"Fluff" Brown was our chief mechanic at N-V while I was there and was the prime mover in keeping the Stormer going (even before it was called the Stormer). I think he and our Competitions chief, Peter Inchley, did the sculpting of the fiberglass gas tank for the production version. The works M-X bikes were damn ugly, but functional.
You must log in or register to reply here.
Share:
Facebook Reddit Pinterest Tumblr WhatsApp Email Share Link