Starting a new thread for the 6 buckets of parts that were waiting on some action. Seeing as I broke my leg (upper tibia) last week kickstarting Crazy , I feel new motivation to go electric. :roll: So far I've reassembled the bottom end with a harder earlier cam after noticing lobe wear starting on the 75 cam , and last night slid the barrells down over the .40 over AE British pistons. So here's today's question , I have a Boyer Micro Mk 1V ignition as well as the original V.G.C. low mileage AAU unit and points plate. Which system should I fit ? The Boyer would be so easy and I've never attempted points. I have an Accel Harley Super Coil Dual tower kit 140403S that I'd like to use too but would like to know how to wire it up based on which decicion is made. B.T.W. the motor numbers are : 850 334226 with H20 stamped at the front engine mount area. The head is RH10 with new guides and will be will be fitted later on. Thanks.

I would fit the Boyer. I have a 30+ year old one with screw down type wire terminals on the pickup plate not the later soldered wire an bullet connections type. The bike has never kicked back, started first or second kick an now with Alton Ekit starts first press of button.
If carbs ignition an wiring are in good order it will be fine. Often other faults are to blame but Boyers reputation for kicking back an braking wires has people distrusting it when problems arise.

I think only the early Boyers have the problem, perhaps Dyno Dave can elaborate.
A good charging system I feel is a must if you want reliable starting. Put a 3 phase alternator and a DD starter on it. Since those mods mine starts like a modern bike. I had an early Boyer which did kick back and take the sprag out. It didn't kick back when kick stating it as it was getting better voltage. I also checked every connection and ended up bypassing most with 14 gauge wire as well. I also got rid of the early Boyer for a Pazon.

Thanks I want DD input here as my notes say retain the points setup. The Prestolite starter has been rebuilt with a 4 brush HD system.

Set up the New Mk1V rotor and transistor plate in line with Norton Word. Typing here with Norton kicking broken leg , new double fiberglass cast replacing first single layer one ,blue. Pain over. Just to make this fall perfect woke up early with coffee to watch a woman back into Crazy Combat on street and knock it over on it's side at 8:15 A.M. I am never awake then , but wanted to send wife off to work with coffee. Called police ,have report , neighbours helped pick 'er up. Got personal plate as she sped off. Police ran through computer then printout in cruiser her address 5 blks. south. Bed robe crutches n' socks with coffee. :|

Torontonian said:
Set up the New Mk1V rotor and transistor plate in line with Norton Word. Typing here with Norton kicking broken leg , new double fiberglass cast replacing first single layer one ,blue. Pain over. Just to make this fall perfect woke up early with coffee to watch a woman back into Crazy Combat on street and knock it over on it's side at 8:15 A.M. I am never awake then , but wanted to send wife off to work with coffee. Called police ,have report , neighbours helped pick 'er up. Got personal plate as she sped off. Police ran through computer then printout in cruiser her address 5 blks. south. Bed robe crutches n' socks with coffee. :|
Click to expand...

That is a nasty bit of luck.
You seem to be taking it all very well. Hope it heals up nicely for you, but I can understand if you now have some trepidation about kick starting.
I limped around for awhile this summer after kicking my 1360 to life a few times. That was just from the normal strain of rolling it over. If it ever kicks back, I will go into orbit... :mrgreen:

I would definitely fit the Boyer. When I first bought my 850 in the mid '70's it had the original points set-up and I was re-setting the points and checking the timing at least every couple of months to get reasonably easy starting. I fitted a Boyer black box unit, which I think was their second generation unit, this would have been around 1977 and it's still going strong to this day (and I've never touched the timing during all of that time!) I think the kicking back problems people speak of in connection with the Boyer is usually caused by low battery voltage.
Btw, the original Boyer system had all the electronics contained in an extended points cover on the timing chest, has anyone else ever come across those?
Dave.

Torontonian said:
Thanks I want DD input here as my notes say retain the points setup. The Prestolite starter has been rebuilt with a 4 brush HD system.
Click to expand...

The early MKIII ANALOG BOYER does have a low voltage problem that is especially hard on MKIII commando...with any e-starter...2 brush 4 brush or my starter.
Since my follow up research (Jan 2001) and expressing my views on this topic, no EI makers have offered their ignitions for review, and I'm sure not going to buy them. So please don't bother to ask for updated recommendation. I reluctantly will parrot the forums/internet.
I bought a new boyer in the late 80's, and to this day I never installed it on any of my bikes. I mostly use it as a tester on my distributor machine...you can see the boyer pick up here. Also any (non MKIII customer) boyer I do work on, gets 4-40 brass screw posts and better leads. Also for superior cooling, I hang the boyer down between the coils like the RITA using a custom bracket I designed. 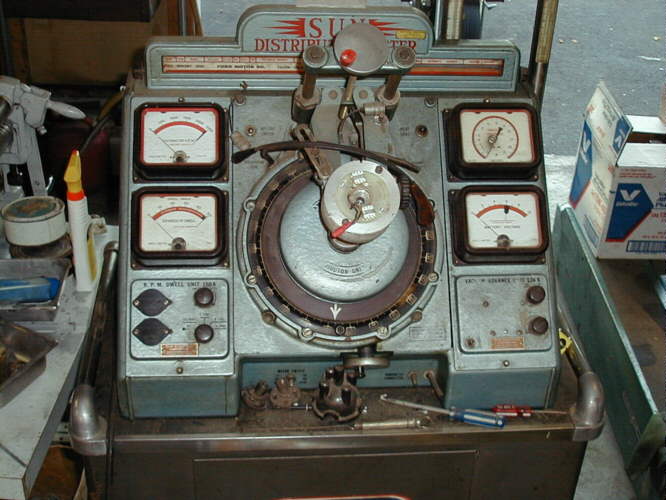 Low voltage black box boyah is pretty hard on kick starter legs too. I've though about a small battery in line with boyah with a didode to prevent voltage back to main battery draw down.

Yes low voltage not good with boyer starting. I used tri-spark and before that on my mk2 i used pazon. Both of these seem to be better if the battery gets a bit low. I think if battery is low the boyer tends to advance a bit (correct me if i am wrong). Of course points work too. I am so happy with my mk3. My back herniated disk thanks me. Make sure the backfire device is set at the proper torque. I still use my kickstart if the bike has been standing for over a week.

Jerry, speaking of low battery voltage, did your Shorai batteries survive the low voltage happening you reported on earlier this year?

Yes they are perfect again. I had to buy the Shorai charger and it fixed them within 1 hour and have been ok since.

Good to know. I might give Shorai a try after my Ballistic batteries didn't work out.

Thanks for the kind comments from the Crip. Concours... you know it never rains , it pours. We just finished off the gift basket of chocolates and fruits sent by my work Association. The fracture is simple ,no pins or screws required and most importantly no displacement. Upper tibia just below the knee ,fracture in a fish hook shape. Zero weight bearing to quote the excellent doctors at Toronto Western. Surprisingly the shock completely ignored the foot and travelled straight up the leg. Leg was locked in the fully straight position with all my weight coming down. Foot just wobbled ,not even a bruise on it. And yes the battery was in a low charge state. Worntorn I am in good spirits ,hey at least it happened end of season trying to squeeze in a last ride. Dave I just fitted a polished up points cover with extended fins that was sitting in one of those buckets. A very rough sandcasting that now looks good with lots o' polishing time suddenly. Have never seen the cap you mention. DD love that machine ,like an old pinball contraption. I'' be using fine strand wire to the MK1v unit with a piece of foam in the points cavity to absorb vibrations. Is this new MK 1V black box analogue or digital. I hope digital. CJ - pics.soon , I have a tutorial with an artist neighbour this evening. Have quite a few photos in a folder. Hobot the battery will be an Eliminator 16 L-BS A.G.M. ,which I just purchased for $125. Will fit an earlier battery tray to accomodate. Jerry I will pay way more attention to battery voltages in the future. Also I find myself involved with helping Alexi Silifoppovitch by communications for his MK111 proj. Photos soon. 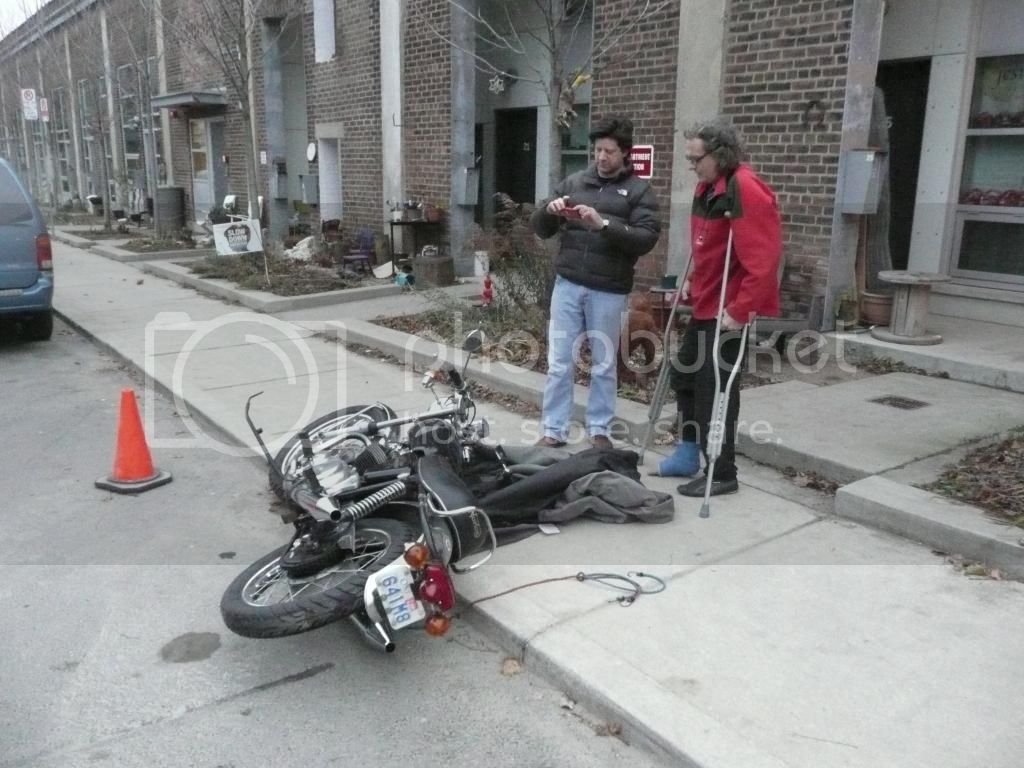 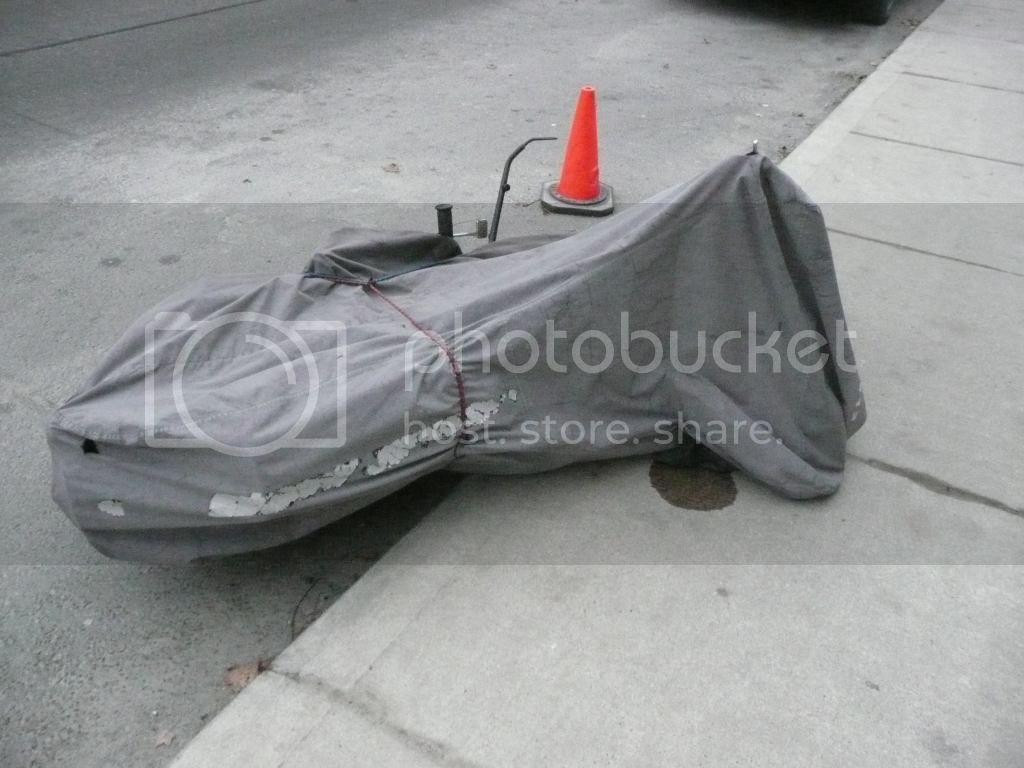 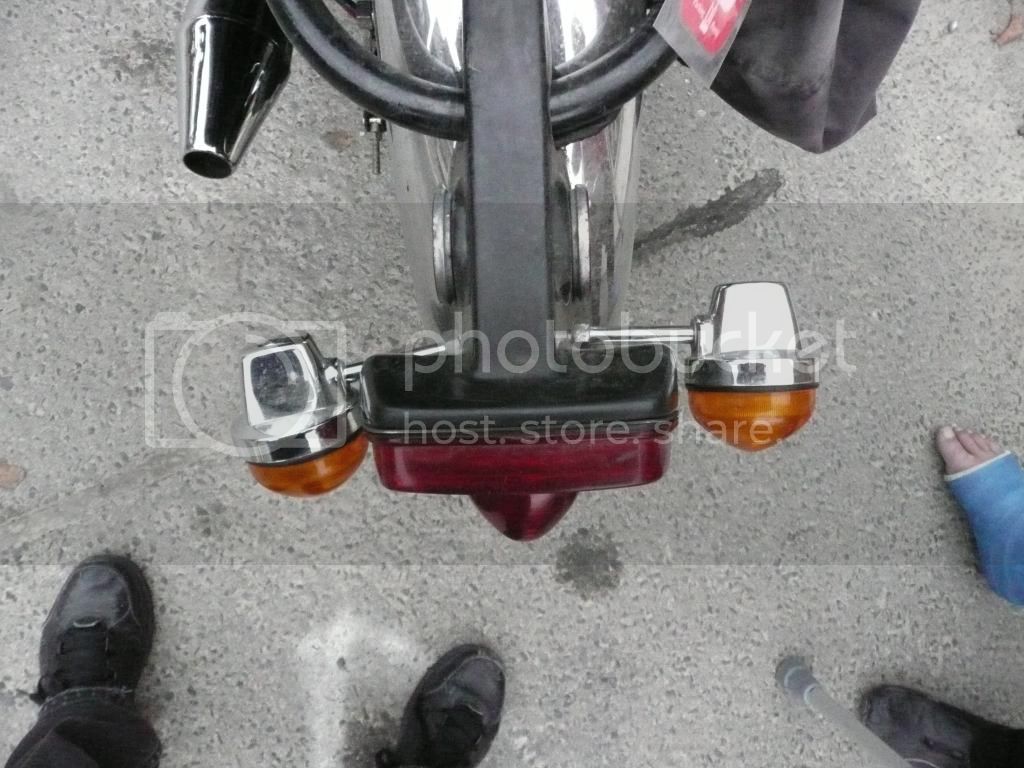 As Crazy Combat is fully insured until May 24 th I am asking how to "reverse kick" her in the springtime. Meaning using the left leg. Cast comes off on thursday after 10 weeks , then a little physio , then Mexico beach walks to regain muscle strenghts.

Ah crap bad flash back task for me on pre-peel Combat smack down on r knee at drag strip. I was the newbie taken under wing of local club 160 miles away so with massive knee tape up shock on setting everyone laughing as I struggled to start to get home or wait till dark and trailer. Could not put any weight on r knee or flipped sideways a couple/3" and twisted 90+', after too many pain spikes and splash downs - worked out a Karate Kid move, bike on center stand, straddle it facing backwards, get taped r knee hanging clear, hop up by leg leg power only high enough to land down on kicker with seat catching me rather than mashed knee or face. My friends cheered and left on open headers though steep Mt sides booming back for hours beating off trauma shock waves.

Another pre-peel Combat event occurred near dusk as gas low pulled into gas station out of a Lassie TV show, deserted but for 90's old man slumped down on stool inside no interest in same ole world no more. Had to limped in to get him to turn a pump on then ugh limp back out and began pumping, here come the withered crooked Parkinson's jerky fella who arrives about time I've topped off - "Nice motorcycle ya got there fella" then turns right around and hobbles back in. That gave me a shot to show off lifting arms while facing backwards do a one legged leap hi enough to kick back down to life, swing around to plop in saddle use hand to get r foot on peg then SNORTON off.