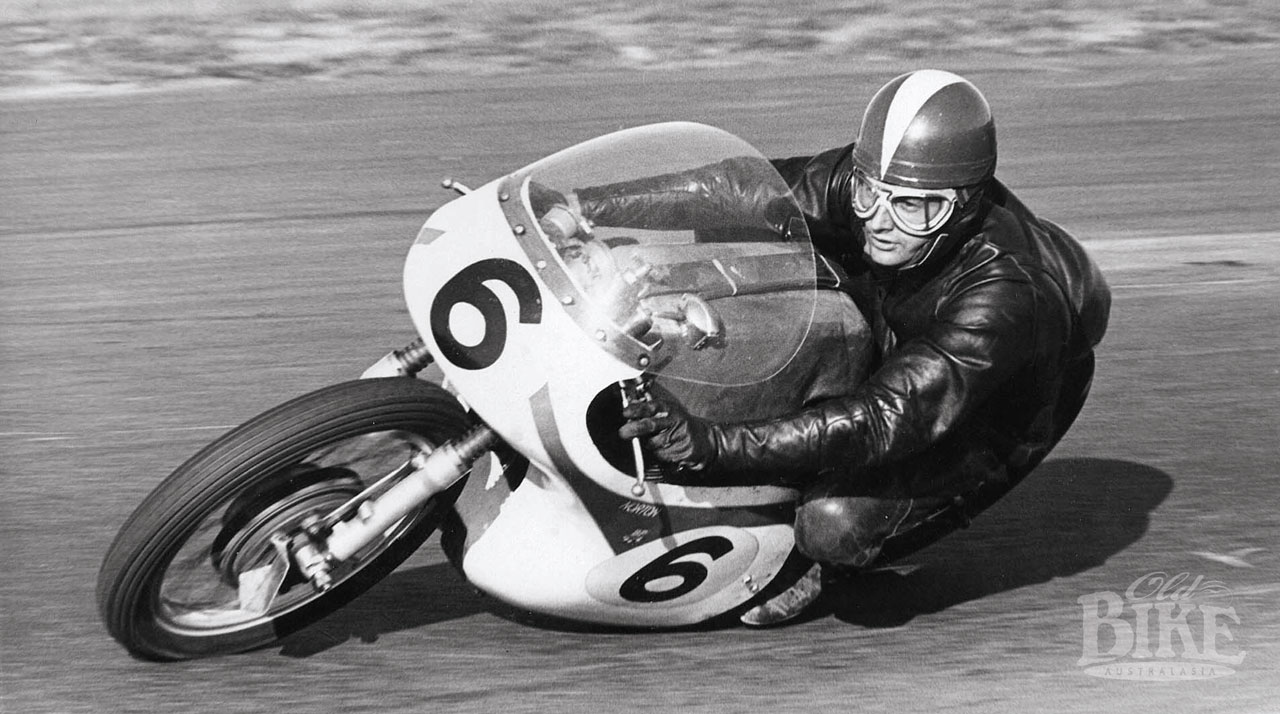 World 250cc Champion in 1969, and a major factor in the World 500cc titles for Kenny Roberts Senior and Eddie Lawson, Kel Carruthers has a CV matched by very few Australians. A resident of the [...]

Kel is a very remarkable man in the many fields he has worked in👍.
Spent a day with Kels Father Jack many years ago, I had driven down to Sydney in an early 850 Mini, with my 1955 Manx engine in the boot, got tee boned at a set of traffic lights and Manx engine parts got spewed out on the road. Had to dodge in and out of traffic looking for them, passengers side door was pushed in so far it made it hard to change gears.
Got to Jacks home and was greeted by a very gruffy man, when I explained why I was there and talking some sense (for a young fella), he changed, we laid the Manx engine parts out on a bench, and he dutifully identified what was correct and what was US and should be in a bin. Ended up having lunch with Jack and his wife, a day I hope I will never forget.
At the time Jack had two Vincent engines on a bench being rebuilt, Jack also spoke about the times with Kel in Europe riding the Manx, great memories.
Burgs

Road racing changed in the early 1960s when the TD1C Yamahas beat the Manxes. I watched Kel at Bathurst with the 250cc Honda four. He was unbeatable there. The only tiime I ever saw him beaten, was once at Phillip Island when Ron Toombs beat him in one race with the 500cc 4-valve Henderson G50 Matchless. In those days the 250cc Honda four was out of the reach of almost every rider. It had cost millions to develop.
When I raced after 1969, I only ever raced what I could afford. A Manx was way outside my budget, let alone a 250cc Honda four. So I crashed a lot.
Anybody who wants to road race needs to buy something decent which has been proven. I learned a lot which I did not need to know,

Yes saw Kel race the 250 Honda at Bathurst also, bought my Manx in 1971, borrowed money from my mates for the $100 deposit and paid it off over the next 12 months $300 total thereabouts, they were going cheap then, as they were past their useful racing life, the Manx will stay with me till I pass this mortal life. Seems it doesn't like me that much, as two broken collar bones since 1971.

I have only ever had one crash in which I really believe I could have been killed. My mate got around me when I over-braked for a corner when my front brake changed as I raced due to heat. He popped in front of me and braked, ans I touched the brake again to miss him. My bike went into a massive tank-slapper and I did not get my hands off the bars quickly enough. I went down the road on the top of my head. A ripple in the bitumen dislocated my collar bone - which is worse that braking it. I still carry that injury. That guy does not realise why I do not want to be on a race circuit with him. Once when I was passing him going into a corner at the end of a long straight, he sat up and ran me off into the escape road because he was being beaten. He rides at Broadford once per year these days. I will not go there with the Seeley, because he is an idiot and I would probably shunt him, and that would not be good. It is about his silly ego - it is dangerous. He cannot acknowledge that I can out-ride him anywhere. In the old days, I always rode a smaller capacity bike and I was always faster in corners.
Last edited: Dec 7, 2022
You must log in or register to reply here.
Share:
Facebook Reddit Pinterest Tumblr WhatsApp Email Share Link