How the mighty have...

Dave
Hang in there old mate, never did like Holdens.

All the best for a speedy recovery from here on.
Burgs

I'll share my experience with the hopes that you'll see some similarities:

A friend and I (on bikes) were gravely injured from a wrong-way driver, he more than I with massive head trauma. I only shattered my femur. When I crawled to him in the road and got a good look, I'll take the shattered femur any day of the week.

Helicopter flight, reconstructive surgery with rods, plates and screws, then sent home after a few, high as a kite on painkillers. I've never felt the need to write poetry before, but all my emotions were right there on the surface. Everything had to come out, for some reason with poetry- not that it was any good.

The opiates and their ilk seem to take some of the pain, but leave you with all the unfiltered emotional up and down rush of the pain. I had to get off them ASAP for my own sanity. I kept taking them to sleep, but couldn't take it during the day as the emotions were too much. The depression was overwhelming and bottomless. I ended up using marijuana during the day at the insistence of a friend who had experienced the same. I had never ever believed in it as any kind of medicine, but it worked so well that I have no doubt it kept me on this planet. Think what you will, but if I had continued to use the opiate based painkillers, it would have killed me.

Today, the femur is healed and riding a bit more cautiously, but that's not a bad thing.

The weed doth have it's purposes. I've been known to use it when my temper is getting out of hand.

One of my sons had never ridden a motorcycle. Is thinking of moving to a country town and buying one. I told him to forget it. These days it does not even take a momentary lapse of concentration. For some people texting on a mobile phone is more important than a motorcyclist's life.

It's tricky Al. He was an 83yo guy who just "didn't see me". Extreme SMIDSY. Witnesses who were in a car behind him said he as driving well below the speed limit. Like he was on auto-pilot maybe. He had just come from lunch at the Bowls club. Wasn't pissed, wasn't on the 'phone. Just taking the same old track home he takes every Sunday arvo. Ok, I'm just some worthless bum motorcyclist, but what if it was a couple of kids crossing the road instead?

PAY ATTENTION ALL THE TIME !

Went for a ride on a Sunday with two buddies. One rode his metric cruiser and the other rode my ST 1300 . Absolutely beautiful day in the low 80’s - no humidity and not a cloud in the sky . I rode my 1950 Norton single which has a manual ignition advance on the left handlebar. Let in the clutch in first gear and then advance the ignition with your left thumb while rolling on the throttle. Leave it advanced while changing up or down until you get to bottom gear then retard just before coming to a stop. You are very busy operating machines of this nature but I have been riding this one for fifteen years now . We were riding two lane paved country back roads on a route I have traveled hundreds of times and I am intimately familiar with it.

I was in the front and came to an intersection with a stop sign - stopped , looked both ways and when no traffic was seen I proceeded across and reached for the advance with my thumb and it wasn’t there . I glanced down while I was in the intersection ( turns out I hadn’t retarded it before stopping - the rpm should have told me ) and when I looked up I saw the truck that I was about to cross in front of.
Instinct took over with stabbing in countersteer and stomping the inside peg . Turned right in the lane and then around the back of the truck which had never slowed .

My buddies whom had front row seats to this incredible stupidity on my part said it looked like an act in a motorcycle thrill show.

This was entirely my own fault and I am still beating myself up over it - as well I should . I allowed a simple distraction to take my eyes off the road for split second while in an intersection of all places. Thankfully no harm done to anyone or anything but my pride and my ego . I have been riding for over 50 years and this is as close as I have come to what would likely have been a fatality - yours truly being the likely victim. If by any wild stretch the driver of the red truck reads this I apologize for the likely stress I and I alone caused - my bad .

So maybe some good will come of this - I hope I have re- learned something and perhaps it will impress upon some who read it how vulnerable we are on motorcycles and how important it is to be vigilant. If something seems amiss wait for the appropriate time to assess the problem. Don’t allow complacency to creep in . Ride safely please - EVERYONE.

I find myself becoming more easily distracted as the years advance. I believe it is a progressive thing and we have to force ourselves to maintain concentration on the task at hand because one day good fortune may not be on our side....What was the subject?

The other day i stopped in the middle of the stairs to catch my breath, then I couldn't remember if i was going up or down!

You are not quite there yet, I’ve walked all the way up the stairs to the smallest room, and then when I found myself in there, I thought, “I wonder what I came up here for?”

I wonder if this is EU compliance and has airbags and seatbelts?

Absolutely not and you’re having a laugh and maybe, but if so, they’ll be broken.

Our Prime Minister Trudeau went to India last year with his family , he and his family played Mr. Dressup at every opportunity , our press had a field day with the photos , politicians don’t get same treatment as Royals , Trudeau fighting to keep his job right now as I post this .....

It must be pure hell to live under such scrutiny and continuous criticism for everything, but he made the choice so he has to deal with it. Even the eagle looks up to be hit in the eye by falling crap on occasion.

Been a while, been doing a decent amount of rehab, but still a long way to go there.
Bike license still has a medical suspension and seems I'll be up for more surgery as soon as the Covid emergency finishes.
In the meantime I have just got the bike back. She's in a very sorry state indeed. Will start dismantling and see what parts are salvageable. Good thing I hadn't fitted the new Fullauto head huh.

I hope you are doing well Dave. As you know, your bike was one of the bikes that inspired me to adapt cast wheels to my own commando. I hope you don't mind me posting the picture of your bike in it's prime below. It's stunning, I hope you get it back to it's former beauty. 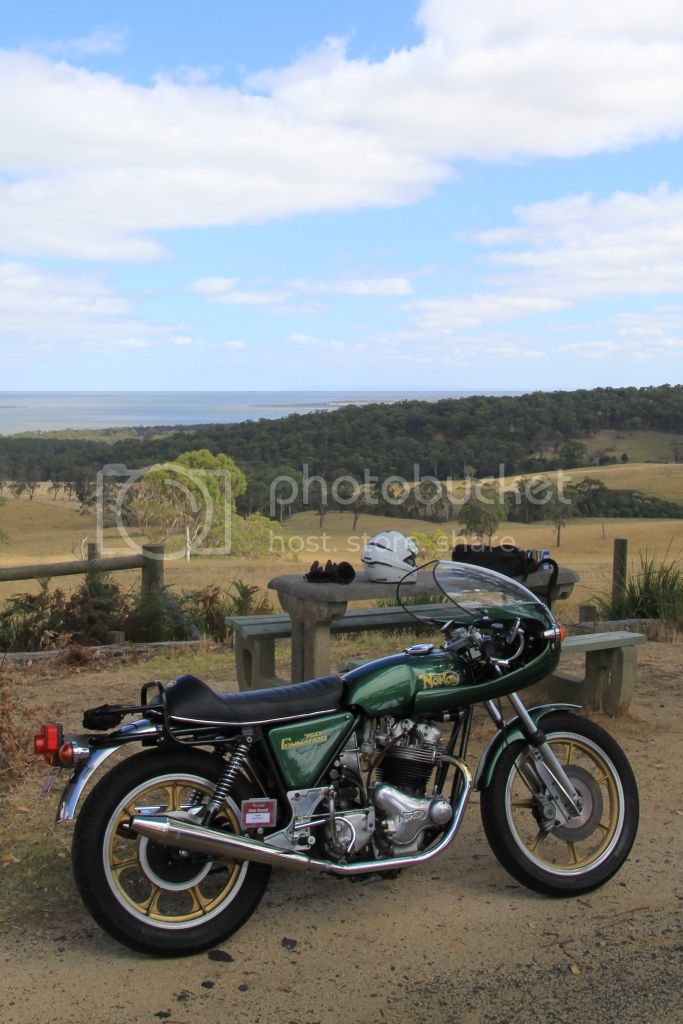 appreciate that you appreciate the result!
Here's a pic of the old girl at the same spot, just 20 minutes before the stack:

What a waste. What a bloody disappointing waste.

Dave, it will be beautiful again

Firkin’ ‘ell Dave. That’s seriously bent, you are lucky to be alive.

What mans has made, man can make again. There’s NOTHING wrong with your bike that can’t be fixed.

Great opportunity to improve on all of those little things that you weren’t happy with !

Best of luck Dave. Happened to me years ago with an 83 yo woman on the wrong side of the road hitting me head on. All my brain could muster was “WHY???” I hope you and your bike find your former good health and form.
You must log in or register to reply here.
Share:
Facebook Reddit Pinterest Tumblr WhatsApp Email Share Link