Hi All
Fork leg oil capacity ...to what's stated in the manual or something different please
Nothing fancy fitted inside them

Nothing fanny fitted inside them
Well I should hope not!!

150cc is what my info calls for. Apples & Oranges. I don't think it'll 'splode Lucy.

And I prefer 30wt over thinner (less viscous) fluid.

170cc as per the racers documentation, not sure why it never made it to the road bikes. This little extra seems to help, I have not bottomed them out since I started to use this quantity.

Madnorton said:
170cc as per the racers documentation, not sure why it never made it to the road bikes. This little extra seems to help, I have not bottomed them out since I started to use this quantity.
Click to expand...

What weight do you prefer?

In 1972 the fork seals on my almost new Combat failed just after the factory warranty had expired. A Norton nerd friend of mine had a set of seals that he gave me but he wasn't sure about how much fluid to add. I called Poke's Cycle in Seattle to get the correct amount and was told to mix 30 weight 50/50 with transmission fluid then add a Coke bottle's amount to each leg. So in went 12oz in the right leg. Well, guess what? Too much oil or too little capacity depending on if you're a half full or half empty person. Another call and Larry(Poke) let me know that first off I had better be buying a service manual soon as my free information bank was now empty. He graciously told me that they fill an 8oz Coke bottle to the top of the "C" in the cola part of the Coca-Cola logo not a whole damn 12oz bottle. There was a subtle implication that only lawyers or stockbrokers would even have a 12oz bottle in their possession. A nefarious group of soul stealers to be associated with especially at 19 years old.
So I'm guessing about 5-6oz as I never did actually measure the bottle. I used the same 8oz bottle that I got out of Poke's vending machine for probably 20 years just for shits and grins. It was a sad day when that bottle shattered after getting knocked to the floor by the handlebar on my son's Honda. There may be an analogy to the whole English motorcycle industry buried somewhere in my Coke bottle experience.

No specific fork oil at the time was recommended. Fork oil viscosities all over the map. 20/50 vs AT? 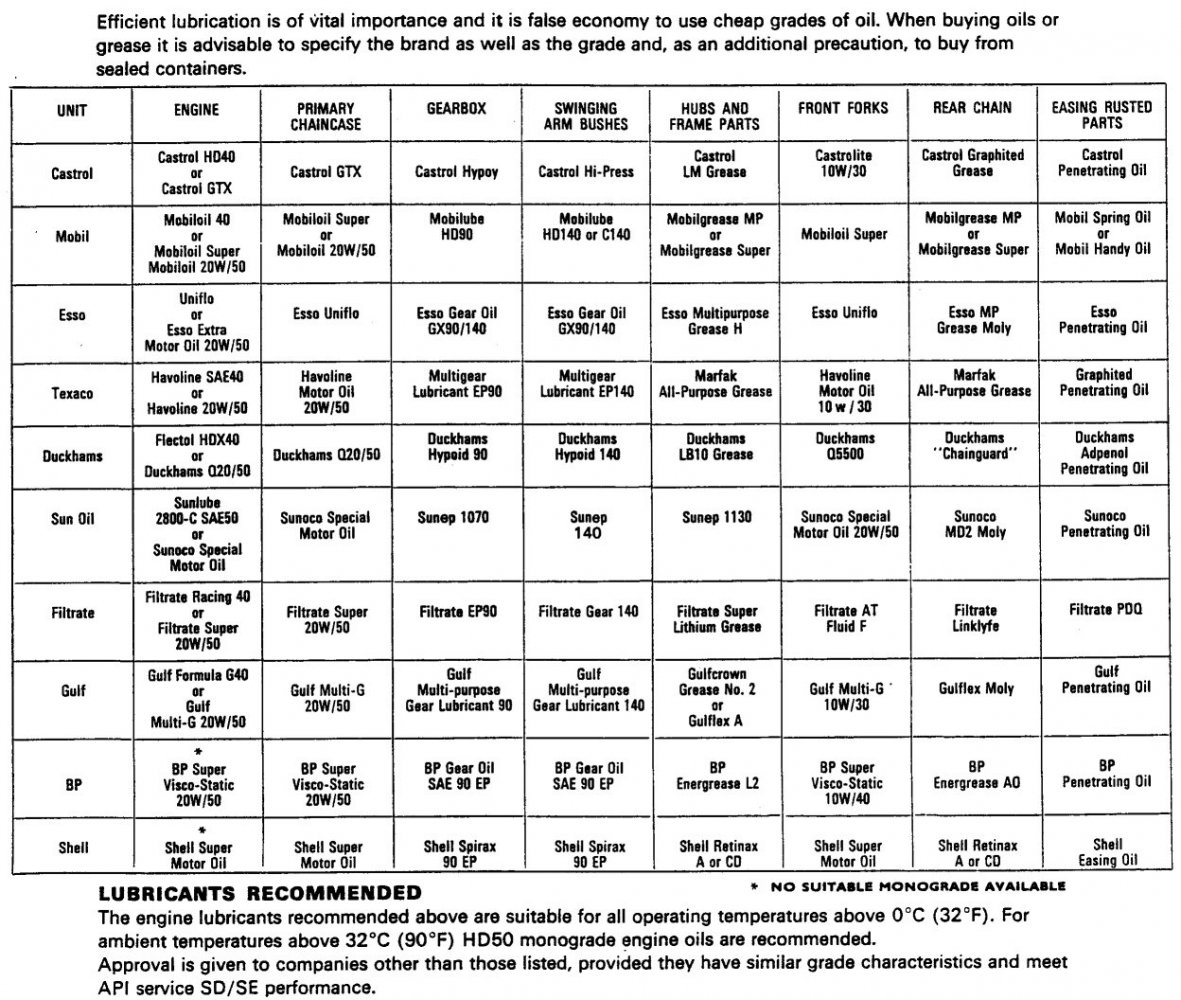 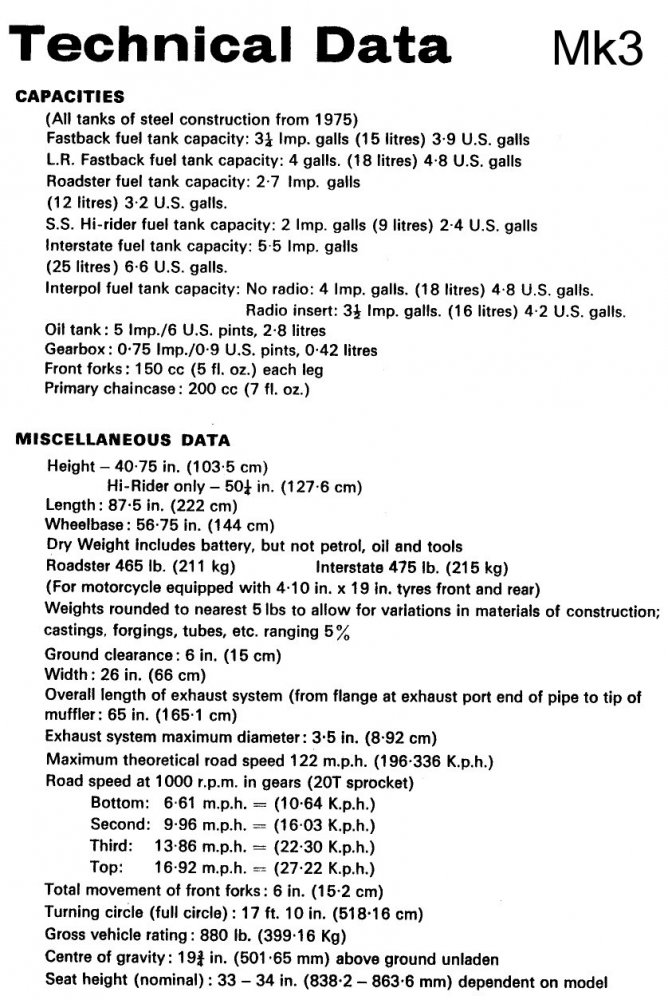 The old Haynes called for 10w30 which is what I've always used, and yep, I stick with the 5 oz(150cc) stated therein. Right or wrong it works, unless the an unusually large pothole makes it past my 66 yr. old vision. The clunk only comes on the rebound unless I raise my big ass up off the saddle as an aide to diminish it.

p400 said:
No specific fork oil at the time was recommended.
Click to expand...

Specific motorcycle fork oils still didn't exist at that time, or, if they did then they were not widely available so the usual recommendation was for either ATF/TQF or engine oil of some description and that didn't just apply to British bikes.

I'll flip you for the 3cc diff.
Click to expand...

Very few people outside the USA will have any idea (of) what a (US fluid) ounce is!
Even those of us who grew up with Imperial measures wouldn't normally use (Imperial or US) fluid ounces.


Very few people outside the USA will have any idea (of) what a (US fluid) ounce is!
Even those of us who grew up with Imperial measures wouldn't normally use (Imperial or US) fluid ounces.

"Quart" (US or Imp.) is another that's not generally used outside the USA.
Click to expand...

Maybe that's why Poke used a universally available Coca-Cola bottle measuring tool. That man was ahead of his time.

Well you folks send me running to Webster or Google whenever I see 'stone'. It's kind of like us trying to count English money...No one could understand it but the English, or we had absolutely no exposure to it. I believe the latter to be true.
I read a lot and when younger could not fathom why the penny carried such high value until learning years later English pennies were sterling.

However, we've had decimal currency in the UK since 1971.

jbruney said:
I read a lot and when younger could not fathom why the penny carried such high value until learning years later English pennies were sterling.
Click to expand...

Edit:
It seems pennies in common circulation were silver until 1707 but I don't go that far back.

https://en.wikipedia.org/wiki/Penny_(English_coin)
The English penny (plural "pence"), originally a coin of 1.3 to 1.5 grams (0.042 to 0.048 troy ounces; 0.046 to 0.053 ounces) pure silver, was introduced around the year 785 by King Offa of Mercia. These coins were similar in size and weight to the continental deniers of the period and to the Anglo-Saxon sceats which had preceded it.

Throughout the period of the Kingdom of England, from its beginnings in the 9th century, the penny was produced in silver. Pennies of the same nominal value, one 240th of a pound sterling, were in circulation continuously until the creation of the Kingdom of Great Britain in 1707
Last edited: Jun 10, 2019

I've always loved the older authors...Crowns, half crowns, farthings, etc. were confusing. This far south and you can figure the rest. Perhaps in a decade I meet a new Englander.
A prayer from you folks in the Isles for a transplanted English friend of mine would be nice. Failing health & approaching eighty, and still fighting through. I know off topic but he's good people.
You must log in or register to reply here.
Share:
Facebook Reddit Pinterest Tumblr WhatsApp Email Link
Top