Hello all,
I think my 75 E-Start sprag clutch bit the dust but was hoping to get some confirmation before I lay out $200. Went to start the bike this morning with the e-start and it turned over fine. Went to do the same a bit later and heard a loud snap. The e-start motor spun, but the engine didn't turn over. Tore apart the primary and found this: 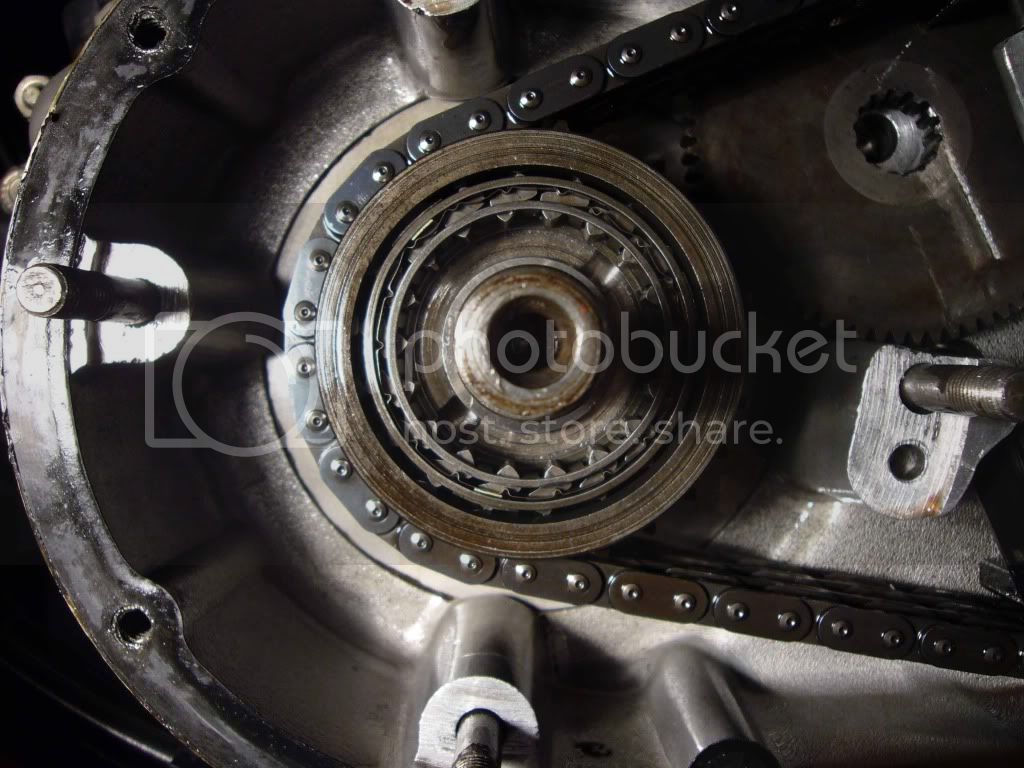 It looks like the little sprags / bearings dealies are pointing in the wrong direction. Can anyone confirm this and provide a little info on how/why sprag clutches fail and if I need to look elsewhere for secondary problems this may have caused?
Thanks,
-paul

c.cito said:
It looks like the little sprags / bearings dealies are pointing in the wrong direction. Can anyone confirm this and provide a little info on how/why sprag clutches fail and if I need to look elsewhere for secondary problems this may have caused?
Click to expand...

Yes, the sprags appear to have gone "over centre"!

Presumably, the inner and outer bearing tracks of sprag clutch assembly have worn sufficiently for this to happen.

As a temporary measure, you could remove the sprag unit and re-set the sprags, but the same thing will probably happen again.

Thanks LAB. I also noticed that the sprag clutch has decided to stay put... I tried to pull it out earlier and it seems to be stuck tight. I suppose I could just tear it out, but was wondering if there's a better way. Heat maybe?
-paul

c.cito said:
I tried to pull it out earlier and it seems to be stuck tight. I suppose I could just tear it out, but was wondering if there's a better way. Heat maybe?
Click to expand...

Heat could destroy the temper of the spring? And as it's the later 18 element unit, the sprag itself may still be relatively unworn? I would try to twist it out or maybe lever it out gently if possible? Or try working the sprags back to their normal position as you turn the inner cage? 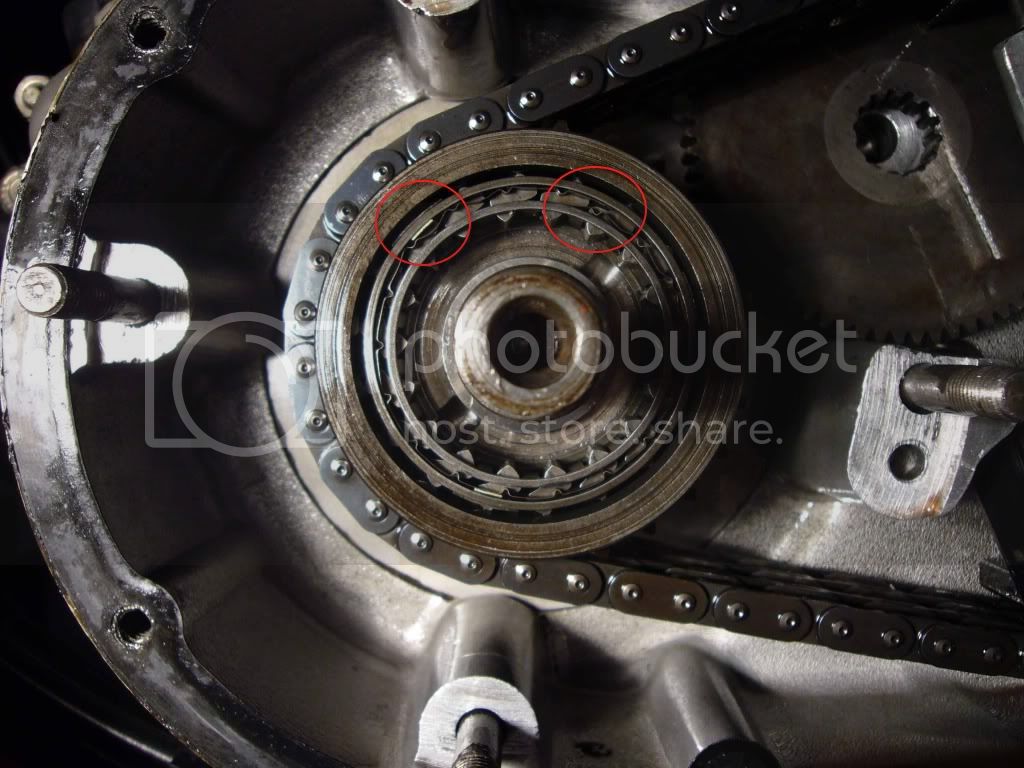 The two things I noticed was that it look likes there's something different about these parts of the spring clip, or whatever that is. In fact in the circle to the right it looks broken. What does this look like in person?

swooshdave said:
In fact in the circle to the right it looks broken.
Click to expand...

Could be the two ends of the spring as it's not an endless "ring"?

The area inside left circle could be one of the retaining clips?

Same as can be seen in the lower right hand corner of the photo below:

I got the sprag clutch out with some persistent gentle persuasion. The cage doesn't look damaged, but I can't get the sprags to move at all. I think it's time for a new one. Thanks for the help, I will have this bike up and running for Butler's Orchard!
-paul

When I got the Mk3 I have now I was told by the PO that the electric starter didn't work, which I was willing to accept, and that it would only spin but not engage. I decided to have a wee look in the primary case to see if there were any bits missing, took off the sprag and discovered the thing had been fitted the wrong way round, 10 mins later after checking it's movement and a couple of sites to make sure, I had a working electric start!
It's worth checking out all avenues before parting with your hard earned cash, especially if it's something you are just going to use on occasion and not an essential part that is needed to keep the bike running.

I got a new sprag . I put it in it worked great untill I got over agressive with the starter button . It flipped the sprag like yours did and the starter would just spin. I took it back apart flipped it back and it worked fine after that. Make sure your batt is good and the timing is set right if you have a boyer. Go to Old Britts mortorcycle parts.com clic on technicel articles then clic on pictorial help installing E start. I would also read overload backfire divice assembly. GOOD INFO

I have a Mark III as well. I have replaced the sprag clutch 3 times in the last two years, and each replacement has worked for no more than a few weeks. Considering I ride the bike a couple of times a week, that means each sprag lasted only 20 or 30 starts after each replacement.

Then the "teeth," like yours, flipped over and would not engage the engine sprocket. I made a couple of attempts to reset the direction of the teeth, and replaced the sprag, but the problem quickly came back.

The failures all followed the same pattern. At first the engine would not turn over on the first start of the day, with a grinding noise from the primary instead. But it would work when the bike was warm. Then it quickly got worse until it didn't turn over at all, but the starter and the drive gear would spin.

On this last failure, with all three components brand new, I decided I would definitely not spend another penny on one of these sprags. I called around and found a couple of sources of the old style 14-tooth sprags. And one source, Fair Spares America, said he would not be stocking the 18-tooth versions any longer, because of problems.

I haven't ordered a new 14-tooth sprag (still getting over the amount of money I have spent on this problem already), but I that's my plan. Can't be worse than what I've been through already.

Good luck with your fix and keep us posted with results.

Heskeths have this problem too, it's not just Nortons. The cage can buckle when the teeth flip over causing them to lock.
Could be the sprag clutch bore in the engine sprocket that's worn.

pkeithkelly,
Yep... just had a second failure of the sprag. Left me stranded and dejected at Butler's Orchard today. I had the misfortune of having more than one issue crop up: sprag and the kill switch failed. Had a few good folks stop and take pity on me. Worked on various issues for about a hour to no avail, and the bike is now sitting in the barn behind the Butler's store. I just got this sprag from OldBritts and installed it yesterday. Worked fine for all of 24hrs. This 14 tooth sprag you mentioned is a better setup? If so, I'll check it out, but after shelling out $200 for this last one, I really would like some confirmation before laying down more cash. The kill switch is outta here, but I really would like to keep the e-start in tact if possible. Thanks.
-paul

I thought the 18 was made because the 14 doesn't last?

Norvil Motorcycles won't warranty the sprag assembly, unless all three parts (sprag, engine sprocket, starter gear) are all replaced together.

"Please note, if you need to replace any of the following, you will need to replace ALL of the following at the same time:-
Sprag Clutch (064733)
Sprocket (064681)
Gear Assembly (064731)
The reason for this is that they all wear at the same rate and failure to replace them together often leads to premature failure of the new part
For this reason, there is no warranty on any of these three parts unless they are replaced together (normal warranty rules apply for parts that are manufactured incorrectly e.g if a part is faulty upon receipt, it will still be exchanged under warranty)

If you are suffering from premature failures of your sprag, then you may have an issue with your anti-backfire device, please phone out tech line"

Ok, so 18 teeth are the way to go then? I hope so since that's all I have been able to track down. L.A.B., I went to Norvil and saw what was needed to get things in order... money. Oh well, part of the deal I suppose. I went ahead and ordered all three components and hope this clears up the issue. I have gotten better at kicking the bike over, so I may reserve the e-start for those times in traffic when the bike dies and I need to get it fired up fast. I just hope this is the last time I need to fiddle around with the e-start... hoping against hope...

Thanks again for all the input.
-paul

My sprag is making grinding noise only occasionaly when I hit the starter button. If i let go of the starter button, and hit it again, it grabs and turns over the engine.
I have already replaced all three components (sprocket, gear, and sprag) once and this is my second sprag after rebuild.
I was told that the new 18 tooth sprag was the "heavy duty version". Sounds like I will be tearing into my primary drive again this coming winter.
In the meantime the safe thing to do is just use the kick start.

Norvil Motorcycles won't warranty the sprag assembly, unless all three parts (sprag, engine sprocket, starter gear) are all replaced together.
Click to expand...

Sounds like a sales gimmick from Les, of course thats the easy way out, replace everything! Just replaced a sprag on a Mk3 yesterday, the owner uses the elec start every time so we'll see how it fares!

Norvil Motorcycles won't warranty the sprag assembly, unless all three parts (sprag, engine sprocket, starter gear) are all replaced together.
Click to expand...

Sounds like a sales gimmick from Les, of course thats the easy way out, replace everything! Just replaced a sprag on a Mk3 yesterday, the owner uses the elec start every time so we'll see how it fares!
Click to expand...

Considering how unreliable the sprag system seems to be, I'd say it's more a business decision and not necessarily a bad one.

What you are hearing could well be the noise made by the overload backfire device slipping, which of course it is designed to do in order to protect the starter drive assembly from damage: http://www.oldbritts.com/e_start_backfire.html so it may need adjusting slightly, but don't overdo it, because if it doesn't slip when it should, then the sprag will take the full force of any engine backfire.

Well I finally got all the parts from Norvil. Just to be on the safe side, option A (with the clutch lip towards the engine) is correct, yes? When set up like this, the large gear to the left spins freely clockwise and locks counter-clockwise. Given how much all of this costs, I want to be sure I am putting it back together correctly. Thanks.
-paul

-how about that Norton font!